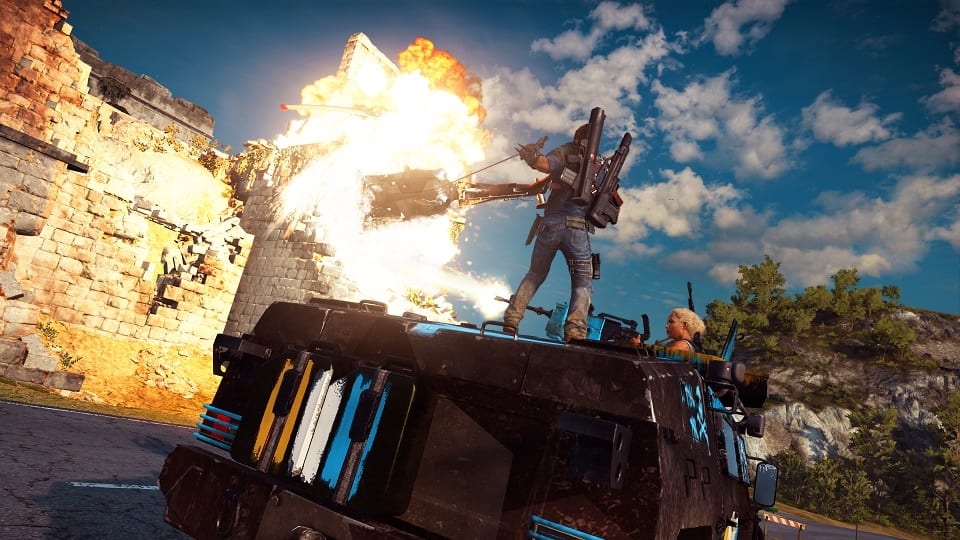 Over the years we’ve tried to stay away from the whole, “this game is like X and Y had a baby,” but in playing Square-Enix’s Just Cause 3, it’s hard not to peg it as the illegitimate love child of Grand Theft Auto and Far Cry. The mission structure, the setting, the open-world sandbox action, it all feels like a crazy mash up with the volume turned all the way up. Despite having its share of high points, however, Just Cause 3 also experiences some (s)lows.

As with previous games in the series, Rico Rodriguez’s most unique feature is the grappling hook, which can be used to scale buildings, attack enemies and even tether objects together. It works well, though the reticule can be tough to spot against certain backgrounds, and it becomes a lot of fun as you gain some experience with it — like when you connect to a point, deploy your parachute to take flight and then quickly switch to a wingsuit to cover serious ground.

It’s not as effective in combat, mostly because it’s easy to accidentally attach to a nearby object rather than your actual target. That imprecision is prevalent in other areas of fighting as well as you can’t aim down the sight of most weapons (an unlocked ability offers a pseudo zoom effect) and instead end up strafing back and forth trying to line up your foes. Melee strikes don’t fare much better, though the game compensates with tons of health and largely incompetent enemies.

Commandeering and operating vehicles is a big part of the game as well, and it’s a solid effort to make all the various modes of transportation handle similarly. Unlike games that end up having serious learning curves for piloting (we’re looking at you, GTA), Just Cause 3 keeps everything tight and reasonably simple when flying helicopters and planes. Automobiles do feel a little finicky, but you should be able to adjust quickly.

There are plenty of nice views and satisfying explosions in Just Cause 3’s massive open world, but all that freedom and mayhem comes at a price. The faster you move the more things struggle to keep pace, and when you start blowing up buildings as helicopters and tanks fire away the frame rate dips considerably. It’s also worth noting that, while the island of Medici is undeniably huge, there’s not a lot of variety from area to area, which undercuts the desire to explore.

Most of the voice acting is done with tongue planted firmly in cheek, and in that context what’s present is solid. In contrast to that, however, is the work of General Di Ravello, whose menacing demeanour feels at odds with the rest of the cast. It’s strange. Explosions and gunfire from the ongoing chaos dominate the soundscape with a nice mix of music sprinkled in to good effect.

Our intrepid hero, Rico Rodriguez, has returned to his home of Medici, which now suffers under the despotic rule of General Di Ravello. Reunited with his childhood friend, Mario, Rico must now try to liberate his people by stopping the General, whose ambitions lie beyond the borders of this island. It’s fine as a backdrop to the violence, but there’s little of substance here.

Missions are administered in Grand Theft Auto fashion as you go to a waypoint to trigger the next step in your journey. In between these structured sections you’re free to explore the massive island with a focus on liberating towns, outposts and military bases — story progression is often locked behind freeing a set number of provinces.

It’s a fine way to spend your time, at least in moderate bursts, but the sameness of one liberation to the next grows stale if your session drags on too long. Each area is liberated by destroying items like statues, speakers and billboards in towns, and radars, electrical equipment and fuel storage in bases. Freeing an area will instantly populate it with rebels, providing a place from which to strike with fresh weapons, gear and vehicles.

Conquests will also open up a new series of optional challenges. They focus on several areas (shooting, driving, destruction, the wingsuit, etc.) with your performance graded from 1-5 “gears.” Those are used to unlock “Gear Mods,” which grant new skills/abilities in the corresponding category – i.e., earn enough gears in a destruction challenge and you can equip “glass grenades,” which detonate on contact. There are a ton of these sprinkled throughout the world.

None of the pre-packaged content really stands out (stories, challenges, liberations) in Just Cause 3, which is disappointing, but where the game manages to excel is in the creation of moments. You have so many tools of destruction at your disposal that it encourages violent creativity. For example, you might tether enemies together, attach them to a fuel canister, stick explosive to them, shoot the canister to send it skyward and then detonate the explosive for a fireworks show.

We can’t remember the last time a game elicited as many non-scripted laugh-out-loud moments, in which a series of explosions creates unexpectedly hilarious results. And how can you not enjoy dangling upside down from a helicopter while discharging multiple RPG rounds into a base of baddies?

Unfortunately, Just Cause 3 is cursed with extreme load times, which you’ll be forced to endure every time you die or fail a mission — and the easiest way to do both of those things is unintended explosive deaths. So, yes, the very best thing about the game (the freedom to destroy) can also lead to frustrating waits while the game reloads.

As a focused, cohesive adventure, Just Cause 3 is nothing special. As a toolkit for incredible feats of chaos and destruction, however, it’s an absolute blast; even if the excessive load times suck some of the interest for experimentation out of it.

By HC Green
Tags: Just Cause 3, Square Enix, Video Game Review
This entry was posted on Tuesday, December 8th, 2015 at 9:16 pm and is filed under Herija Green, Video Game Reviews. You can follow any responses to this entry through the RSS 2.0 feed. Both comments and pings are currently closed.