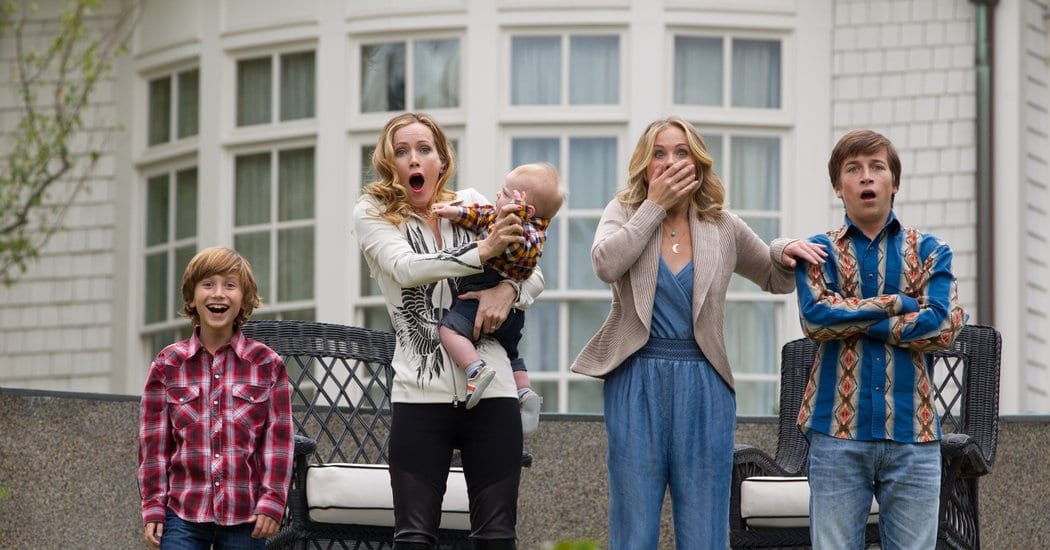 The more scenes without Ed Helms the better.

More than 30 years have passed since Clark and Ellen Griswold packed their kids into the Wagon Queen Family Truckster and headed off to Wally World in National Lampoon’s Vacation. Now, Warner Bros. is resurrecting the franchise with Vacation, a film that blurs the line between remake and sequel. Written and directed by Jonathan Goldstein and John Francis Daley, let’s see if the pairing of Ed Helms (The Office) and Christina Applegate (Anchorman) can usher in a new era of Vacation movies.

Now an adult, Rusty Griswold (Helms) works as a pilot for a low-fare airline and has a family of his own — his wife, Debbie (Applegate), and sons, James (Skyler Gisondo) and Kevin (Steele Stebbins) — with a wide array of issues. After a dinner with some friends reveals his family secretly dreads their annual trip to a cabin, Russ decides it’s time to pull a page out of his father’s handbook and pack everyone up in the car for a cross-country drive to Wally World.

Despite it being a glorified prop, the Tartan Prancer provides a lot of mileage (just not to the gallon) for gags and one-liners. The absurd key fob, littered with dozens of assorted symbols that have no obvious purpose, the multiple mirrors, dual fuel tanks and more are all pretty clever. In many ways it’s the best of what the movie tries to accomplish: an evolutionary version of what we saw in the original.

If her work as Veronica Corningstone didn’t convince you, Applegate once again proves she’s a very talented comedic actress. Initially she seems stuck playing the straight role to Helms’ antics, but as the trip progresses she gets more and more opportunities to shine. Her return to her alma mater is one of the funniest moments in the entire film.

There are several effective supporting roles sprinkled throughout Vacation. Leslie Mann is good as Audrey, Rusty’s now-married sister, who puts on the facade of happiness but is passive aggressive about her role as a stay-at-home mom. Charlie Day (Horrible Bosses) has some moments as a river rafting tour guide as well, but Chris Hemsworth steals the show as Audrey’s husband, Stone. He strikes just the right balance between friendly and arrogant.

While we’ve liked Helms in previous roles, he’s generally a secondary character, and at least based on this film it might be where his talents lie. HE only seems to have one or two notes to hit with a character that’s consistently portrayed as clueless. In a smaller role that would’ve played just fine, but as the lead it wears out its welcome. In a movie that features a number of legitimately funny moments it doesn’t seem like Helms is involved in most of them.

Despite those funny moments, Vacation isn’t consistently funny in the same way that something like 21 Jump Street or Ted were. There’s a lot of over-the-top ridiculous humour — some of it works, and some of it falls really flat, particularly one of the film’s long-running gags.

We’re sure that there are people out there that will get a kick out of the bullying Kevin, who delights in physically and verbally harassing his teenage brother, but we weren’t into it. In a film in which so many of the jokes are absurd (the drifter with the rat, the cow, Debbie Do Anything, etc.) the mean spirited stuff just doesn’t fit. Again, maybe as a one- or two-time gag it’d be OK. As a running joke, not so much.

There are five extras, one of which you can immediately dismiss (Georgia, which is basically all about how cool the state is). Of the remaining four, Return to Wally Word and the few deleted scenes are the most worth your time. It’s a little over the top in how reverential they speak about the original, but it’s interesting. The Burning Man inspired deleted scene is pretty good. As with seemingly every gag reel that makes its way onto a disc, what’s here is very short.

Given the rather uneven history of franchise reboots, Vacation isn’t as bad as it could’ve been, offering some legitimate laughs along the way. That being said, it’s not a comedy that’s going to stay with you after the credits roll, either.

By HC Green
Tags: Blu-ray reviews, Chris Hemsworth, Christina Applegate, Ed Helms, Vacation
This entry was posted on Monday, November 2nd, 2015 at 7:56 pm and is filed under Herija Green, Movie Reviews. You can follow any responses to this entry through the RSS 2.0 feed. Both comments and pings are currently closed.