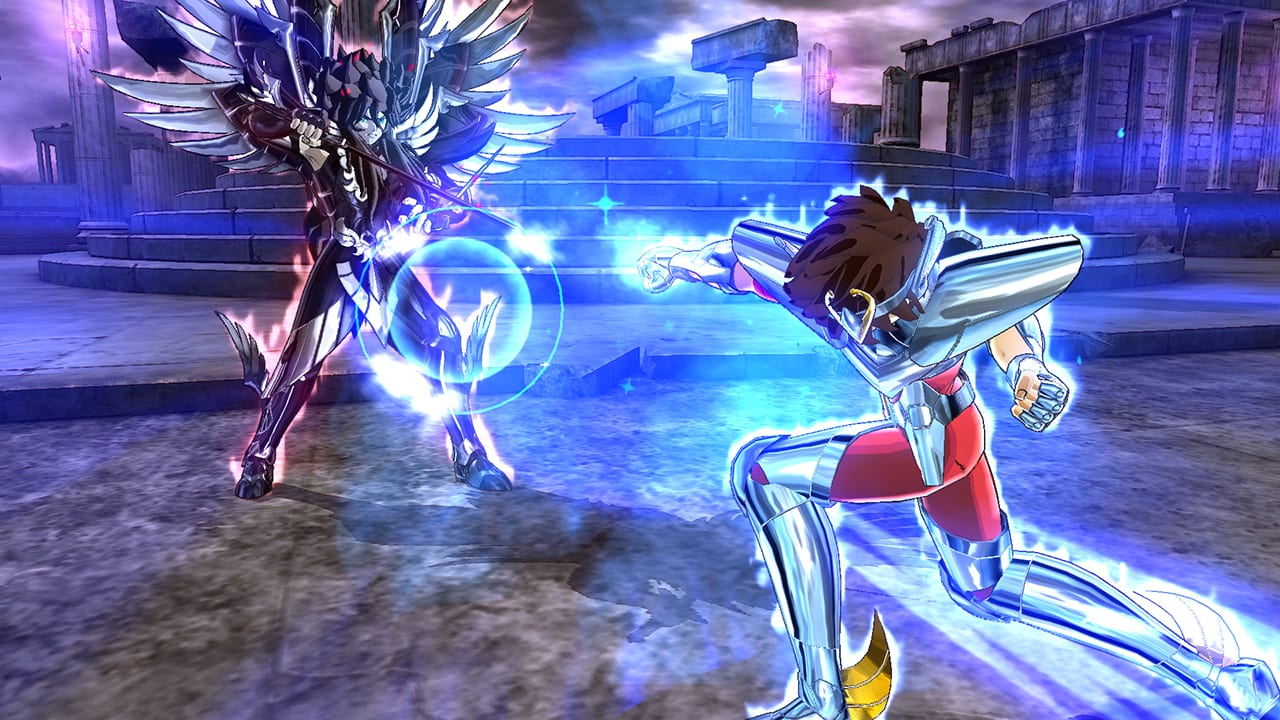 What can you do when an evil entity leads an army of God Warriors against you? The answer is easy: throw on your God Cloth, draw power from the constellations and fight with everything you’ve got. In Saint Seiya: Soldiers’ Soul, you will fight as a number of central characters from the series Saint Seiya (available now on Netflix!), but is this game accessible enough to the average player?

Being that Saint Seiya plays out as a 3D fighter, you’ll use the left stick to run about the stage. Pressing “X” will perform a jump, and mashing Square and Triangle will assemble combos for you. The trouble is that the game is so damn picky about which inputs actually trigger actions.

Have you gotten four swings into a five-hit combo but need to block? Too bad, because you’ve got to wait until the combo finishes unless you have the utmost precision in timing your presses. The same goes for your super moves, which are accessible by holding down R2 and pressing the corresponding face button(s).

Unfortunately, the world of Saint Seiya: Soldiers’ Soul is pretty bland with stages that look no better than anything you could find on the PlayStation 2. This is heavily emphasized by the quality contrast of the character models and special effects, which are fantastic and look absolutely like 3D renditions of the show’s source material.

Various types of God Cloth that the cast dons look just like those “super cool but likely very cheap” toys from the 1980s and ’90s that had super-shiny plastic that was always metallic gold or chrome — the kind that was reflective, but in which you couldn’t really see a reflection. Animations are lively and very well expressed, from devastating combos to simple facial emotions.

In terms of an audio experience, you’ll be treated to some pretty well done Japanese dialogue, albeit with some very cringe-worthy exchanges every now and then — such as the one guy who cries “MAMAAAAA!!!!” when he wins a fight. If you don’t happen to dig the native Japanese voiceovers, you can switch it to Brazilian, Portuguese, or even Spanish! But that’s it. You will actually have a great time if you play this with Spanish audio.

In Saint Seiya: Soldiers’ Soul, you will fight as a number of characters unlockable through the game’s four campaigns that loosely detail the events of the show. Saint Seiya and his friends all draw their power from certain constellations, with Seiya’s being the Pegasus. Along the way you will be assigned a new character almost every fight, so the playable character roster blows up pretty quickly.

Sometimes these fights won’t make sense, though, as you’ll finally beat a tough opponent only to be treated to a short cinematic of them shouting some nonsense at you while they’re beating you to a pulp. Seeing your character get trashed by a dude you just beat down makes the fights feel completely meaningless after the third or fourth time it happens.

Combat has a very stubborn feeling as well, and it often makes for an extremely difficult game on even the easiest difficulty settings. Combos can’t be interrupted by anything except being smashed in the face because there is little fluidity to transitional animations. Timing is crucial in a bad way, because you will often start a combo string and either miss completely or stuff seven blows into a blocking opponent, who then proceeds to show you how it’s really done and destroys half of your life bar.

You’ll absolutely have to master every small nuance of the combat system to clear any of the campaigns. Even easy difficulty will trash you, which is an issue. Easy difficulty in any game should enable a user to steamroll anything they’re faced with, but here in 4S there is no discernible difference between Easy, Normal and Hard. You can lower the CPU players’ health down to 25 per cent in the Options menu, but that feels like a cheat. We’re not bad at fighting games, either! This one is just very… picky.

Playing against another person is pretty fun, be it online or against a friend on the couch. We didn’t experience game-breaking lag while online, but it did take a few minutes to match us up. As with most fighting games, save this one for when you’ve got a buddy over.

While the story makes little sense if you’re unfamiliar with the show, Saint Seiya: Soldiers’ Soul isn’t really aimed toward you. This is aimed at those that are fans of the show and predecessor games. It’s not a bad game, it’s just not a title you can simply have a good time with right off the bat.

By Jeff Cater
Tags: Saint Seiya, Soldiers' Soul, Video Game Review
This entry was posted on Friday, October 30th, 2015 at 3:50 pm and is filed under Jeff Cater, Video Game Reviews. You can follow any responses to this entry through the RSS 2.0 feed. Both comments and pings are currently closed.