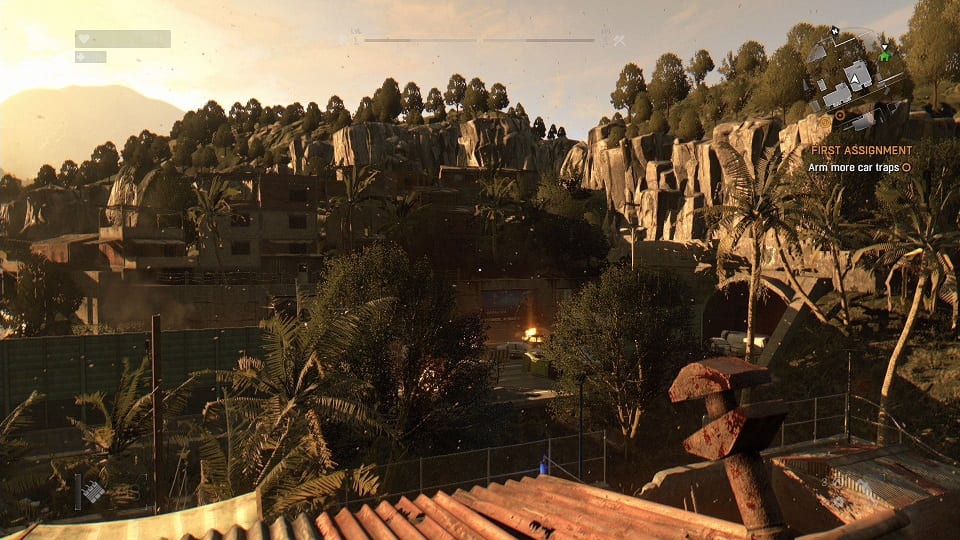 If you can see it, you can climb it. Doesn’t always mean you should!

Warner Brothers has been knocking it out of the park lately, and its partnership with Techland simply reinforces that statement. Dying Light is a rare breed, zombie survival with parkour elements reminiscent of Mirror’s Edge. As elite operative of the GRE (Global Relief Effort) Kyle Crane, you are relied upon to infiltrate the ranks of the surviving factions and prove to The Ministry (the house that wants to glass the fictional city of Harran) that there are still people worth saving there, and even clues as to how to cure the zombie outbreak that involves less fire.

The default control scheme for Dying Light can take quite a bit of practice to become comfortable with. As expected, the left stick controls Crane and the right stick orients the camera. Things get a little shaky, however, when you start experimenting with the parkour and combat systems. Jumping and parkour moves are bound to the right bumper, and we can’t tell you how many times we’ve mistakenly mashed a face button while trying to scramble up a building.

The left trigger is assigned to your secondary weapon like throwing stars or Molotov cocktails, so expect to accidentally waste a few of those items once you start running into firearms. Reason being, to aim down the sights of your weapon you have to click in the right stick, which in turn makes precision shots a very difficult affair with a horde of zombies nipping at your heels. After about an hour it starts to take hold and you should become comfortable with the controls. Still, we’ll often activate the kick move (on the left bumper) instead of using secondary items, but that’s really just us being forgetful.

The various regions of Harran you visit are absolutely incredible to take in. With the day and night cycle Techland implemented you’ll be treated to some gorgeous sunsets painted across the city’s ruined streets and buildings. The shambling silhouettes of the dead stumbling past the sunset is also a strikingly cinematic sight to see.

Weather is a beautiful and dangerous effect as well because, while watching the waves of rain pour in while cloth tarps whip violently in the wind is fun, it’ll surely get you killed. We’ve also been brutally eaten by zombies while admiring the fire effects during night time, which not only bloom realistically but also obscure details hidden past the flames. Seeing a zombie suddenly come alight by a campfire is a startling experience to say the least.

The only issue with the visuals we ran into was that the clothing on characters seemed to have an exaggerated pull when hit by wind, and even inside buildings characters’ clothes will sometimes twitch and pull by an unseen force.

Really, play this game with headphones if you are able to. Zombies sound like zombies, so there’s nothing to worry about there. Character interaction is also well done with rich voice acting (for most of the characters, there are a few that feel a bit forced) and a constant synth-y soundtrack gives the game a very Romero feel.

Dying Light gives you freedom to explore the city very early on, and it’s quite an exciting, and at the same time foreboding, experience. The strewn evidence of survivors is both an indication of the severity of the situation and a constant reminder of the tragedy wrought by the infliction.

After adjusting to the control scheme of Dying Light, you’ll be amazed by how well the parkour and combat elements mesh together as nothing seems out of the question. Combat does always feel a bit awkward, but no more so than how fighting a zombie hand-to-hand would somewhat be like (we think).

Techland also made sure to give out several useful skills to the player to ensure that everyone can find a style of play they’re comfortable with — so if you like to be a bruiser, unlock some skills like Ground Pound or the spinning Whirlwind attack. If you so choose to avoid most conflict, the skills Vault (allowing you to bound over zombies) and Roll (tapping a button before landing from a great height to receive considerably less damage) are invaluable.

Dying Light’s quest structure does get a bit same-y feeling after a while, as most quests turn out to be “Grab item X and return to person Y” or “Plant a bomb here, here and here.” The methods in which you choose to complete these are completely up to you, however, so you can at least be as upfront or as subversive as you wish.

Probably the greatest part of the game is that there is four-player drop in/out co-op, so you and three friends can run and jump around Harran until blood shoots out of your eyes. On top of that, a fifth person can actually invade your game as a coked-up super zombie that can pounce and shred players that don’t tread with care.

Dying Light is a title that really showcases what the new generations of consoles can do. It features a huge map to explore, a killer soundtrack, gorgeous environmental effects, and it made killing zombies fun again.

By Jeff Cater
Tags: Dying Light, Techland, Warner Brothers
This entry was posted on Tuesday, February 10th, 2015 at 12:15 am and is filed under Jeff Cater, Video Game Reviews. You can follow any responses to this entry through the RSS 2.0 feed. Both comments and pings are currently closed.