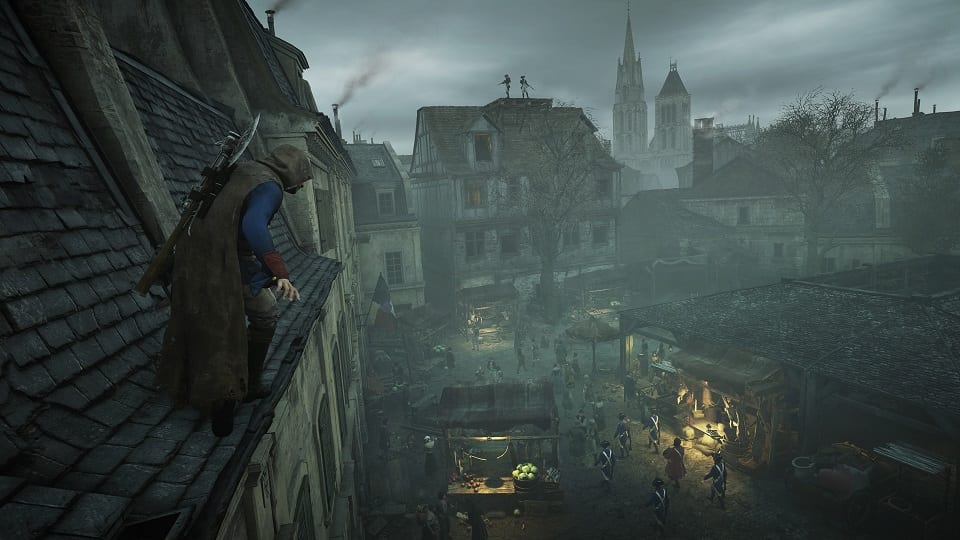 Part of us really feels for Assassin’s Creed: Unity. Beneath the bugs and bad press is a pretty good (but not great) game, one that was more of the same but comfortably so. Yes, it showed that Ubisoft’s development team has stagnated the franchise, but the likable lead character and intriguing story powered along a competent AC experience. We can honestly say that playing through the game we had a much better time than the flawed Assassin’s Creed 3 and its awful hero.

As an apology for the gigantic mess that was Unity’s launch, Ubisoft has offered the formerly premium Dead Kings DLC for free. On the surface, this is a generous offer, as the DLC was previously the highlight of the game’s DLC plan. It’s big, roughly 5-to-6 hours to finish the main post-Unity story, and its map is probably about one-third of the main game’s Paris.

But beneath the surface is an unfortunate fact: Dead Kings is everything that Assassin’s Creed does poorly.

At its best, Assassin’s Creed is about hanging out on rooftops, figuring out an infiltration path, taking out guards with a variety of weapons and assassinating from the shadows. At its worst, the series offers clunky platforming and difficult chases via wonky parkour mechanics. When you put this in an enclosed environment such as Dead Kings, the problems really stand out.

Much of Dead Kings takes place in tombs and catacombs, solving puzzles and racing against the environment or scaling through the dark. This feeds into troublesome moments that break up mission pacing, with unclear climbing points and wonky camera angles made worse by a compressed environment. And like all catacomb crawlers, expect to solve environmental puzzles using fire and switches in mechanics lifted straight out of Tomb Raider.

Overland, the city of Franciade offers more of what you get with Unity, just in a smaller, dirtier and very gray villagescape (but with one kick-ass Abbey to climb up and around). The story itself picks up where Unity ends, and because of that, you may want to think twice if you haven’t completed the main campaign for both spoiler and combat difficulty.

However, it’s, you know, free. So don’t think about it as a DLC, but rather as an optional post-campaign chunk of the game. When you put it in that perspective, it’s more to do, and if you’re a series fan, who’s to argue with free?

Dead Kings is a big free extension to Assassin’s Creed Unity, so that in itself makes it worth checking out if you’ve already bought the game. However, it’s certainly not a selling point that will band-aid any concerns people had about picking it up in the first place (though seriously, Unity’s core game isn’t nearly as bad as the griping made it out to be).

By Mike Chen
Tags: Assassin's Creed: Unity, Ubisoft
This entry was posted on Wednesday, January 21st, 2015 at 4:40 pm and is filed under Mike Chen, Video Game Reviews. You can follow any responses to this entry through the RSS 2.0 feed. Both comments and pings are currently closed.