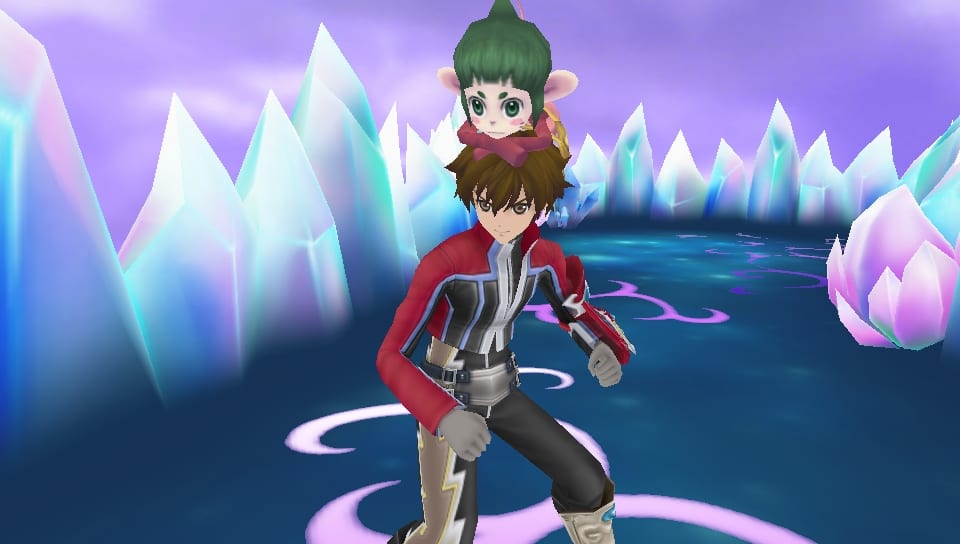 I have no clue what is going on, and I’m afraid to know.

The Tales series is something we’ve never really got into, but it’s one we have been curious about nonetheless. The love these games get has always made us wonder whether there is something special to them or if it’s catering to an underappreciated demographic. After playing Tales of Hearts R, it’s easy to see the potential in the series yet still hope there are other games in it that are better than this one.

Outside of combat, Tales of Hearts R will feel very familiar to anyone that has played a Japanese RPG before. You run across an overworld, wander around towns and through dungeons with a very simple interface, only needing to hit a button to interact every now and then. Menus are not too complicated, though they do take a little getting used to if you are not familiar with past games’ mechanics. A few terms and how they factor into the gameplay were confusing at first until we played around to better understand them.

Once in combat, the game feels more like Devil May Cry of all things. However, due to the wealth of options available, many of your basic combo moves require simultaneously pressing the attack button and a d-pad direction, which can often lead to executing the wrong move entirely. Even during the latter parts of the game we would want to launch an enemy up, only to hit it with a standard attack instead.

Maybe it’s because we’ve reviewed quite a few games that look very similar to it (especially on the Vita), but Tales of Hearts R came across as really generic. The colours pop out well, but the environments and characters all feel like something we have seen before, with very little originality. The graphical prowess won’t wow anyone either, as the game looks just a few notches above a PSP game.

The voicework, meanwhile, is done completely in Japanese with English translations via text box. We can understand why they made this move, as the game probably did not have the budget for English actors, but it would’ve been nice to have an option to mute the voices without turning the volume off.

Even though we don’t understand a word of Japanese, it felt like the actors were over exaggerating and gave poor delivery. Whether that’s right or wrong, it was not a pleasant auditory experience. In fact, muting the game entirely would’ve been a option had the music not been one of the game’s highlights.

If there is one thing we’ve grown weary of in any RPG, it is a slow start. We bring this up because for hours we had to deal with a generic yet confusing story that was not going anywhere interesting with combat that was incredibly limiting — especially compared to the many straight up action games it tries to imitate. Fortunately both of these changed, though only one was for the better.

Unfortunately, the story never got better. It eventually expands into something more epic, but the characters are either boring or completely unlikable. Story segments also take far too long, making things feel very bloated. Don’t try to just skip it, however, or else you may end up missing a crucial piece of information and not have a good idea of where to go.

This ended up hurting the game overall as, while combat was good, it wasn’t quite good enough to keep the game compelling the whole way. Without a unique new enemy or a new move to experiment with, stick with what we knew works seemed the best way to go, which could feel a little repetitive after a few hours. There were long stretches when this was not an issue, but it was very noticeable when it popped up and screeched any momentum to a halt.

Tales of Hearts R has quite a few points going for it, and if you enjoy the series’ gameplay there is plenty here to enjoy. Conversely, if you play RPGs hoping for a good story, you may want to consider how much you really enjoy Tales’ combat before playing. For some, it may be enough. For others, though, it may be best to find a different RPG instead.

By Casey Curran
Tags: Tales
This entry was posted on Saturday, December 6th, 2014 at 8:37 pm and is filed under Casey Curran, Video Game Reviews. You can follow any responses to this entry through the RSS 2.0 feed. Both comments and pings are currently closed.