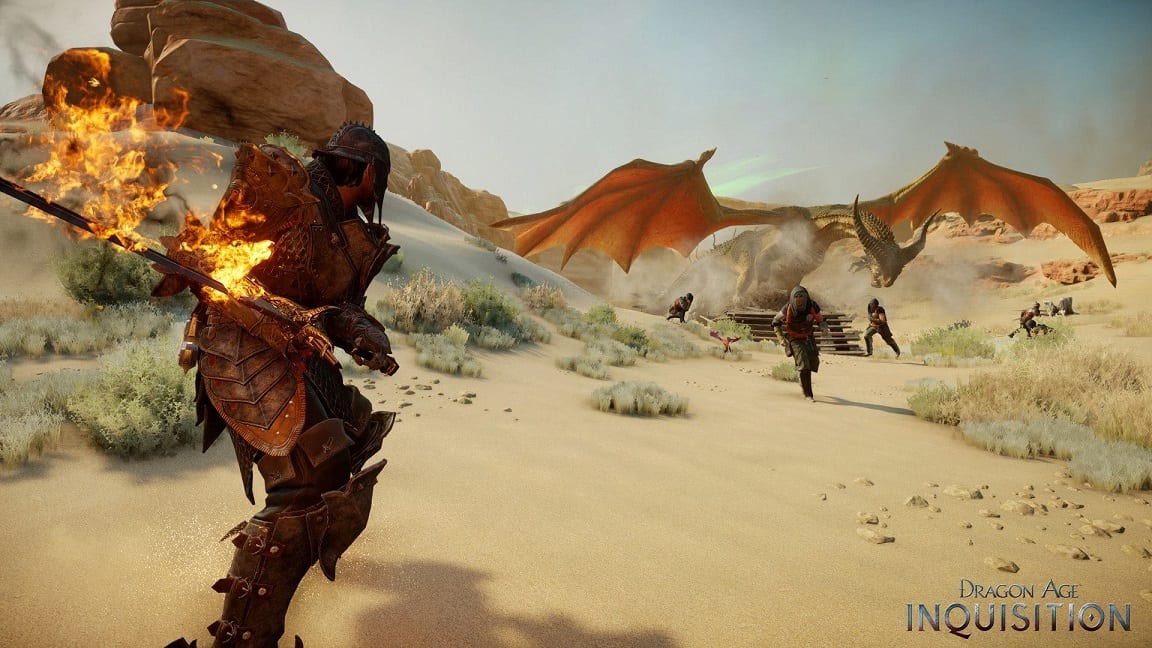 No one expects the Dragon Inquisition!

One of the holiday season’s biggest releases is Electronic Arts’ Dragon Age: Inquisition. While some other major launches have been marred by bugs and bad pre-release press, the early buzz was that Inquisition would be a major contender come awards time. Now that it’s actually here, it’s easy to confirm that the game lives up to the hype — and, in many ways, exceeds it.

One of the biggest shocks for series fans upon the demo release of Dragon Age 2 came from its combat system. Gone was the tactical based target-and-menu system, replaced with a hack n’ slash mechanic that felt lifted from lesser action RPGs. Bioware felt the blowback from this pretty strongly, and much of the pre-release press focused on the revamped combat controls.

That being said, it’s not necessarily a throwback to the system of the original game. You still have instant actions linked to buttons, and the ability to jump allows your Inquisitor to traverse the environment in a free-roaming way rather than being stuck on a flat plain. However, Bioware does allow you to turn combat into a completely tactical assault by freezing time in an overhead view. From this perspective, you can assign actions to each party members for as much control over the battle as you want.

In a sense, Inquisition provides a halfway point between the controversial Dragon Age 2 and the traditional Dragon Age: Origins. Bioware has given you the tools to essentially do what you want — play as a button masher or freeze the action and strategize to your heart’s content.

If you wanted an example to demonstrate what an RPG can do with this generation’s hardware, Inquisition is your showcase. Any fears of asset reuse a la Dragon Age 2 are gone; from beautiful landscapes to gritty stone and metal to snowy hillsides, Inquisition has just about every permutation of environment covered.

From character models to environments to lighting, everything here sets a standard, both for fantasy worlds and RPGs in general. Despite having to process massive areas, only a few technical hiccups become visible. On the flipside, details are exquisite, from blades of grass to the way daylight reflects off various surfaces. As of now, Inquisition’s visuals create the definitive fantasy world for video games, and it’s probably the closest that you’ll see to the world you imagined in your head for your Dungeons & Dragons campaign. Only occasional glitches and draw-distance pop-ups break the spell it casts.

Inquisition’s voice cast and writers ensure that the audio meets the high bar set by the visuals. Bioware allows your Inquisitor to use one of several voices from both genders, so it’s not just Male Shepard and Female Shepard. However, the performances that really stand out come from your party members and the banter between one another as you travel the world. You’ll encounter familiar faces from the previous two games, and sharp ears will also pick up on Bioware’s usual suspects.

While Inquisition isn’t a true open-world game, it certainly feels like one thanks to extremely large playable spaces and segments. However, unlike open-world comparables in the Elder Scrolls series, you never quite get the feeling of filler or traveling for the sake of traveling when you’re moving from point A to point B. Areas feel just large enough to give you a sense of scope and purpose without exhausting the soles of your party’s shoes.

Once you’re in the world, what do you do? Well, there’s the main quest. There are side missions you’ll encounter just like any good RPG (sorry, Final Fantasy XIII). There are additional gameplay modes, from constellation puzzles to assigning strategic assets in a war room across the worlds of Ferelden and Orlais. The war room is particularly important, as the decisions you make here dictate how the map and missions open up, which then further position your influence on the world.

If there’s one area that actually disappoints, it’s the main story arc, which gets muddled down. Individual details regarding choice get the spotlight, but when you look at the big picture, the narrative feels a little weak. However, decisive moments branch the story off into new areas, and when you add the different playable character classes and races, Inquisition offers an immense amount of replay value.

Online play seems to be a required throw-in these days, and Bioware learned from its successful Mass Effect 3 co-op experiment. In the company’s sci-fi epic, online play gained assets that pushed your main story to a more successful endgame. Here, Inquisition offers a similar gameplay experience (procedurally generated four-player battle scenarios that last about 20 minutes), but the rewards are completely separated. Co-op is a bonus dungeon crawler, like the Dragon Age version of Gauntlet, and has no impact on the gigantic single-player campaign.

In short, Bioware has stuffed Inquisition with content and variety, all with sharp execution and strong characters. There’s very little filler with this gameplay, and considering that dedicated fans could top 100 hours easily, that’s quite a feat.

A huge game that manages to stay personable and focused thanks to its details and characters, Dragon Age: Inquisition sets the benchmark for what next-gen RPGs can do. It’s a contender for Game of the Year.

By Mike Chen
Tags: Electronic Arts
This entry was posted on Wednesday, November 26th, 2014 at 1:50 am and is filed under Mike Chen, Video Game Reviews. You can follow any responses to this entry through the RSS 2.0 feed. Both comments and pings are currently closed.