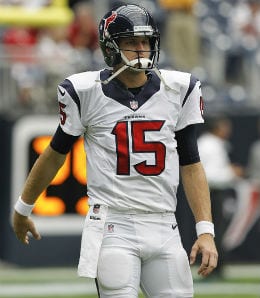 You know that feeling of a strong wind on your face when you’re already pissed off? It pierces your facial skin like a needle does a balloon (except without the whole explosion thingy, hopefully). It’s that same kind of maddening pressure you feel as injuries mount and your bench looks more like an emergency room than anything else. Once again that’s why we are here for you with our Wire Troll picks for Week 11.

Ryan Mallett, Houston Texans: The bitter unknown can be a cold desperate place. Mallett was a popular trade target at this year’s draft. Houston used its best poker face as New England finally relented just before the start of the season. We don’t know what Mallett will do exactly, but we do know Andre Johnson and DeAndre Hopkins are a quality pair of WRs. Check out the video below for a look at Mallett during his first practice as the starting QB.

Carlos Hyde, San Francisco 49ers: The dynasty implications are bigger than any other rookie RB with Hyde. Also don’t be fooled by his lack touches so far. The 49ers are in the playoff picture and they need Frank Gore healthy for the long haul. Advantage, Hyde owners. His bruising style of running has got him three TDs this season and we see many goal line attempts for Hyde during the stretch run, especially now that San Francisco has remembered that pounding the rock on the ground is how it wins games.

C.J. Anderson, Denver Broncos: It took injures to both Montee Ball and Ronnie Hillman for Anderson — not Juwan Thompson — to become the Broncos feature back. While it was only the Raiders, Anderson rattled off 163 yards in total offense on 17 touches with a TD on Sunday. He has proven his worth and now that Hillman is out for the next two weeks, Anderson has dropped his hat into the touches conversation for Denver.

Cecil Shorts, Jacksonville Jaguars: Injuries have hampered Shorts’ production this season, but he is still the veteran leader for this team of youngsters. He is also viewed as part of their bright future. Now with rookie and leading receiver Allen Robinson out, Shorts is even more appealing. Shorts’ stat line on Sunday of 5/119 could be the standard moving forward.

Mychal Rivera, Oakland Raiders: It took a while, but Rivera has arrived. Much like the Carson Palmer to Brandon Myers connection of 2012, David Carr to Rivera is clicking as a solid fail-safe. PPR alert: Rivera has at least six receptions in each of his last three games and the three TDs in that same span, should have you taking him seriously.

By Josh Johnson
Tags: Baltimore Ravens
This entry was posted on Tuesday, November 11th, 2014 at 9:40 pm and is filed under FOOTBALL, Josh Johnson, The Wire Troll. You can follow any responses to this entry through the RSS 2.0 feed. Both comments and pings are currently closed.