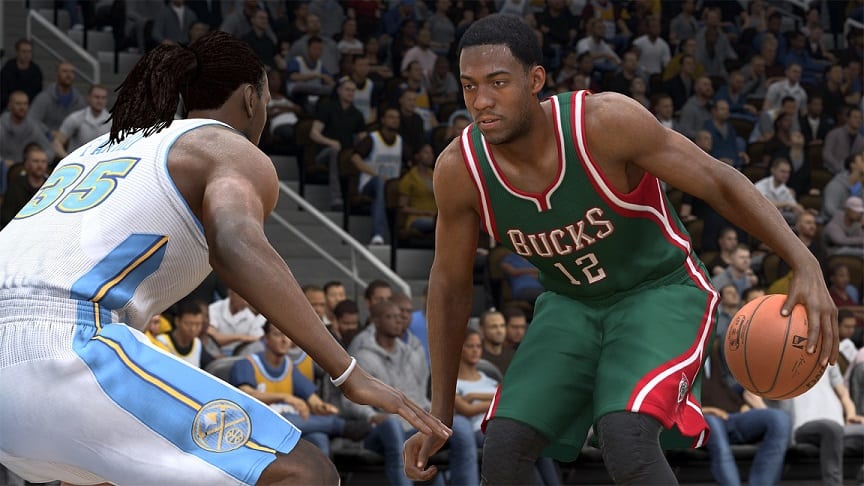 Parker > Wiggins. Mark it down.

Tired of coming up short in its head-to-head battle with the NBA 2k series, EA Sports pulled the plug on NBA Live for three years before jumping back into the fray last year. Despite such a long time away, the results weren’t pretty as problems infiltrated nearly every facet of the game from poor controls to frustrating A.I. That left a lot to account for in a relatively short period of time to get NBA Live ’15 ready in time for a new season. Let’s see how EA fared in its Herculean task.

There was a lot of bluster from EA last year about its BounceTek dribbling system, but after creating a dismal experience that has been thrown out in favour of a far more streamlined approach. You can now spin, juke and crossover with the flick of a stick, and it’s far more responsive. The effectiveness of the gather and Euro steps has been toned down as well, and while we’d stop short of declaring offense to be simulation worthy, it’s still a move in the right direction.

Shooting is also much improved from Live ’14 with a more realistic feel to timing your jumpers. The game now features a meter to indicate the level of defensive coverage you’re facing, ranging from green when open to red when blanketed, which then affects how effective your shot is. It’s a decent idea, but the meter is underneath your player (along with a stamina meter) and tough to monitor in real time. That led to plenty of times when “guarded” would pop up along with the timing when it certainly looked on screen like we had all kinds of room.

Things aren’t as strong off the ball, however, with both defense and rebounding needing further refinement going forward. Defensively, it’s too easy to get blown by even when it seems like you’re in good position, and once that happens it’s rare for your help to arrive in time to stop the drive to the basket. On the glass, it felt nearly impossible to consistently box out despite having inside position. As such, most of our rebounds came from crashing in off the wing.

One cool feature allows for calling the play with a touch of a button when the ball stagnates. It’d be nice to have whatever play was being run displayed somewhere, but the reality is that after a few games you should be able to accurately diagnose who’s going where once it starts.

Unlike last year, NBA Live ’15 absolutely looks like a next-gen title. The faces and bodies look realistic, and the animations, while not always silky smooth, certainly don’t look anywhere near as choppy. Crowds and arenas also look good, though they sometimes seem to get confused as to who they’re supposed to be rooting for with post-game boos after a home team win. There’s work to be done with the uniforms, which look awkward and bulky.

We get ESPN’s presentation once again, and that includes the commentary of Mike Breen and Jeff Van Gundy (no post-Warriors Mark Jackson). The duo, who don’t sound appreciably different from last year, handle the duties fairly well with some moment-specific analysis. They’re prone to some silliness — for instance, acting like a shot that pushes a 20-point lead to 22 in the waning moments sealed the deal — but they won’t test your nerves. The same cannot be said for the soundtrack.

If you’ve played a sports title of any variety in the past several years you should have a pretty good idea of what awaits you in NBA Live ’15. Dynasty puts you in the GM’s seat, providing decision making power over all aspects of personnel (trades, free agency and the draft) as well as some coaching input in the form of minutes distribution. Trade logic is decent, though it doesn’t feel like it’s weighing salary enough as we were routinely able to dump bad contracts.

Before each season you’ll choose from a list of preset goals reflecting where your franchise is in the NBA hierarchy. Contending clubs will be tasked with things like going on long winning streaks, putting players on the All-Star team and winning championships. Sign on for a rebuilding effort and you’ll be asked to do things like dump salary and develop young talent. While there are only three options to choose from, it does provide a little flexibility with how you oversee your club.

Rising Star is the individual career mode, and while it too has been upgraded from last year, it’s still very lean. You play in the Jordan Take Flight Showcase for rookies, and then you’re drafted based on how you perform — in theory anyway… despite being the game’s MVP we went 12th overall. Once on a team you’re assigned a specific role (star, starter, sixth man, etc.) and allocated minutes based on that designation. Skill points are earned by playing or simulating games, allowing you to improve.

Although it’s quite bare bones, at least the terrible grading system from last year has been overhauled as you’ll no longer lose points for every miss, failed steal attempt and other common actions. You’re given the chance to switch teams after the season, either by exploring trades or signing contracts once your rookie deal expires, but your salary is absolutely meaningless. Plus, unless we missed it, the game doesn’t keep track of your yearly stats so you can’t see your career numbers.

There are several other modes, including NBA Rewind/Big Moments, which allow you to replay stuff from the ongoing season, and Live’s version of Ultimate Team. Online head-to-head takes a less is more approach as well, offering few options but solid server stability.

While it’s still the No. 2 basketball game on the market, NBA Live ’15 at least offers a viable alternative to those looking for a version of hoops less rooted in the simulation minutia of the NBA 2k series. There remains room for growth, but at least the arrow is pointed up.

By HC Green
This entry was posted on Thursday, November 6th, 2014 at 5:01 pm and is filed under BASKETBALL, Herija Green, Video Game Reviews. You can follow any responses to this entry through the RSS 2.0 feed. You can leave a response, or trackback from your own site.