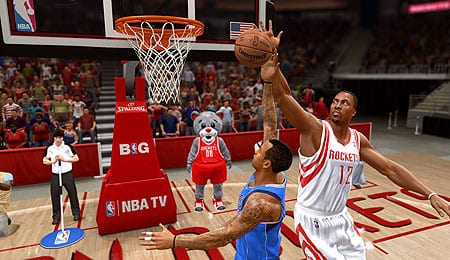 Get that weak shit outta here!

Here’s a little bit of trivia: The first game we ever reviewed was NBA Live. Who knew that EA Sports would then pull the plug on the series and not release another installment until now? Yes, NBA Live ’14 marks the franchise’s return after three full years without a title. Is it poised to make a Grant Hill-style return to glory? Or will it be more like Greg Oden? Time to tip it off and find out.

Although nearly everything in NBA Live ’14 seems familiar on the surface, the disconnect between what you want to happen and what actually does happen is undeniable. We lost count of how many times we hit buttons to steal the rock, block a shot or rebound the basketball only to watch our player remain nearly motionless. Timing your jumpers feels awkward as well, leading us to quickly switch to the “Ratings Only” method of shooting… an excellent inclusion, by the way, and one that results in far more realistic shooting percentages from every range.

More disappointing that any of that, however, is the heavily touted BounceTek dribbling system. In theory, it’s supposed to allow you to quickly chain dribble moves together to break down defenders and leave them in your wake. Instead, the transitions are choppy and unnatural, which makes properly timing the controller inputs an uphill battle. So haphazard are the animations that it’s actually a better approach to use audio cues to time your moves. It’s a system in dire need of additional polish if it’s to deliver the intended experience.

Beyond the issues in execution, there are also some strange design choices in the controls. For instance, holding up on the right stick on defense makes your player raise his arms above his head — at which point you’re bolted to the floor. That’s right, these world-class athletes cannot hold their hands up and slide their feet at the same time. Another weird one is that you have to hold down a bumper to specify who you want to pass to rather than just tap it.

While many elements aren’t as effective (or intuitive) as they should be, one move ends up being far too lethal: the hop step. This gather almost always creates space in the paint, allowing you to shoot loads of semi-contested jumpers at point blank range. It’s a cheap way to score to be sure, but given how many open midrange and three-point shots we missed game in and game out, it became a necessary evil.

For a game that elected to not even make Xbox 360 or PlayStation 3 versions, NBA Live ’14 certainly looks better graphically suited to those systems than next gen. Player models are passable, but as noted the animations can be really choppy, which is much harder to swallow. There are four available camera angles, none of which seemed quite right after years of playing the 2k series. They either felt too tight or too wide, and the frame rate the game runs at is sub par.

There is one area in which Live nails it: presentation. This is arguably the best use of the ESPN license since NFL 2k5 with all the appropriate in-game graphics and a fully-realized halftime report. On the downside, that halftime report seems to last nearly as long as a real halftime, so odds are after a couple of games you’ll just end up skipping it.

On the audio side, Jeff Van Gundy and Mike Breen provide an above-average effort on commentary most of the time, though it does repeat a little liberally. Live also implements real audio snippets from coaches during the “Wired for Sound” segments — a cool idea that’s buried in the lengthy halftime report. In-game effects, such as crowd reactions and chants, are solid.

Even if you ignore the existence of the NBA 2k series, NBA Live ’14 still falls short as a basketball simulation. We’ve already discussed the issues with the controls, but it’s worth noting again just how much they hurt the flow — passes aren’t crisp enough, fast breaks aren’t quick enough, and so on. One of the best things about pro basketball is the athleticism with which the game is played, and that feel is nowhere to be found.

Opponent and teammate A.I. disappoint on both ends of the court. Time and time again we watched as passes were stolen courtesy of our teammates randomly deciding to relocate just as we were throwing them the ball. On defense, their switching was routinely counterintuitive, often leaving us to scramble around to find whoever the game thought we should guard (since the A.I. never seems to register that you’re both covering one guy). The result: tons of open shots for my opponents. It’s as if everyone in the game is saddled with what scouts would call a low basketball IQ.

As with pretty much every sports video game, Live features a team-oriented franchise mode and a player-specific entrant known as Rising Star. Starting with dynasty, NBA Live ’14 provides pretty much what you’d expect in terms of management options. An experience system is in place that you can use to improve your coaches, trainers and the like, which pays on-court dividends in the form of things like better attribute ratings and fewer injuries. It’s nothing mind boggling, but it provides some reward for completing the game’s in-season goals.

Probably the most unique element of dynasty is that each of the 30 coaches are actually different in how they approach defense. For instance, one might be more apt to double a hot shooter than another. It provides some game-to-game variety on the defensive end. Unfortunately, there doesn’t seem to be much difference on offense. Watching Live play offense you’d think every team pounds the paint… oh, and that your average shot in the post is preceded by between two and 147 pump fakes.

While the franchise mode is mediocre, it’s still better than Rising Star. The create-a-player is stunningly limited in scope, offering up very few appearances to choose from and only a handful of archetypes for baseline abilities. After you make your selection, you’re thrust into a rookie showcase and then drafted based on your performance in that game.

Now, we’ve been critical of 2k’s grading system in the past, but after playing Live’s version, we take it all back… grading in NBA Live ’14 is insanely harsh, docking you for missed shots. Not some, mind you. Every… single… one. In 2012-13, only 31 players shot better than 50 per cent, and just one (Dwyane Wade) played guard. As a point guard, that puts us in a tough spot right off the bat. Then when you consider we’re also dinged for every point our opponent scores and every failed steal attempt — that’s right, you lose points for swiping at the ball — it gets really frustrating.

There are a few additional modes as well. That includes a watered down version of Ultimate Team (in which you can only build your squad through random packs — no auctions), NBA Rewind (2013-14 games with challenges based on what happened in those contests) and Big Moments, which is a growing collection of things like buzzer beaters and impressive individual or team efforts from isolated segments of a game. They’re OK, but they’re not exciting.

Rounding things out in NBA Live ’14 is the online multiplayer. We’ve never been a big proponent of online basketball (or baseball), and there’s nothing here to make us change our tune. The few games we actually found were riddled with lag to the point that any timing-based action, such as shooting a jumper or blocking a shot, felt basically impossible.

As a big believer in the motivational power of competition, we were excited for the return of the Live series. Somehow, though, NBA Live ’14 makes the franchise feel more outdated than ever. We still hope EA finds a way to breathe life into it as the dwindling number of options for each sport isn’t a good thing for gamers in the long run.

By Herija Green
This entry was posted on Thursday, December 12th, 2013 at 4:26 pm and is filed under BASKETBALL, Herija Green, Video Game Reviews. You can follow any responses to this entry through the RSS 2.0 feed. You can leave a response, or trackback from your own site.