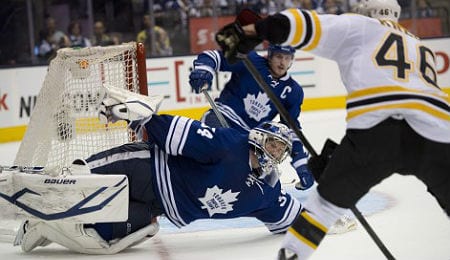 Is James Reimer creating a goaltender controversy in Toronto? (The Canadian Press/Frank Gunn)

It’s been another great week of Fantasy hockey with surprise sleepers and studs lurking around every corner. Here at RotoRob.com, we’ve adjusted our teams accordingly and suggest you do, too. Before we get to this week’s waiver wire picks, how nice is it to see NHL hockey flourishing again in Alberta with the hot start of the Flames, and to a lesser extent, the Oilers? Heading into the season the hockey odds of both Alberta-based NHL teams getting off the quick starts were likely slim.

And now to our waiver wire picks.

James Reimer, G, Toronto Maple Leafs (ESPN: 17.4 per cent; CBS: 30 per cent): Jonathan Bernier (3-3-1, 2.57 goals against average, .917 save percentage and one shutout) hasn’t exactly been the breath of fresh air fans have been hoping he would be this season. With Reimer healthy and ready to go, he could see a lot of time in net, and a 45-save effort in a 3-2 win over the Chicago Blackhawks on Saturday (see video below) suggests he’s ready to handle the pressure. In five games, “Optimus Reim” has three wins, a 2.47 goals against average and a .929 save percentage.

Daniel Winnik, RW, Toronto Maple Leafs (ESPN: 0.8 per cent; CBS: 4 per cent): Fantasy GMs would be smart to jump on this guy, especially in competitive leagues with lots of teams. In 11 games with the Leafs this season, Winnik has a goal, seven points, a plus-7 rating and 16 shots. He’s playing on the top line and the Leafs have started to string some wins together, so he’ll have plenty of opportunity to produce for the time being.

Justin Braun, D, San Jose Sharks (ESPN: 8.4 per cent; CBS: 14 per cent): Braun’s not going to put up a lot of numbers, but five assists, a plus-5 rating and 16 shots on goal aren’t bad in 13 games this season. He’ll prove even more valuable in expanded category leagues.

Matt Nieto, LW/RW, San Jose Sharks (ESPN: 1.2 per cent; CBS: 21 per cent): A second round pick from 2011, Nieto is quickly proving he belongs with the Sharks. In 13 games, the Long Beach, California native has a goal, six points, an impressive 27 shots on goal and a plus-1 rating. What’s more, he’s also getting to spend time alongside Joe Thornton. Buy low on Nieto, especially in ESPN leagues as he’s barely been touched.

Matt Beleskey, LW, Anaheim Ducks (ESPN: 28.7 per cent; CBS: 30 per cent): Beleskey may only have five goals and a plus-3 rating through 12 games played, but he offers Fantasy Hockey GMs so much more with 33 shots on goal, 26 hits and eight blocked shots. If your league has categories like these, be sure to snatch him up.

“Studs and Duds” is our weekly segment on who was hot and who was not in Fantasy hockey in the previous week. Week Three’s honourable and dishonorable mentions…

No. 1. Marc-Andre Fleury, G, Pittsburgh Penguins: “Andy McFleury,” as Dakota’s dad like to call the Pens’ netminder, had an impressive week. In three games for the Pens, Fleury collected three wins while posting a 1.00 goals against average, a .959 save percentage and two shutouts. Almost every season, poor postseason performance reflects on his Fantasy draft status the following year, allowing savvy GMs to snatch him up at a bargain pick.

No. 2. Chris Kunitz, LW, Pittsburgh Penguins: Kunitz has also been a stud, notching four goals, seven points, a plus-4 rating, four power play points, two game-winning goals, seven shots on goal, one faceoff won and six hits. As you can see, his value only goes up in leagues with more skater statistical categories.

No. 1. Mike Smith, G, Arizona Coyotes: It was a different week, yet the same story for Arizona’s Smith. He failed to collect a single win in Week Three, posting a 3.92 goals against average and a .883 save percentage. In Smith’s defense, he has none in front of him (ah, we see what we did there). In nine games this season, he has just one win, a 4.46 goals against average and a .860 save percentage. If you’re still hanging onto Smith at this point, well, you’re a much braver Fantasy GM than us.

No. 3. P.A. Parenteau, RW, Montreal Canadiens: Parenteau didn’t fare much better, collecting zero points, a minus-3 rating, two penalty minutes, one shot on goal, one hit and two blocked shots. At least he got a big shootout goal to win Tuesday’s game.

That’s it for our coverage of Week Three. Now it’s your turn. Tell us in the comments below how we did or what players made or broke your week in Fantasy hockey.

By Dakota Case
Tags: Alberta
This entry was posted on Sunday, November 2nd, 2014 at 5:00 pm and is filed under Dakota Case, HOCKEY, The Wire Troll. You can follow any responses to this entry through the RSS 2.0 feed. Both comments and pings are currently closed.