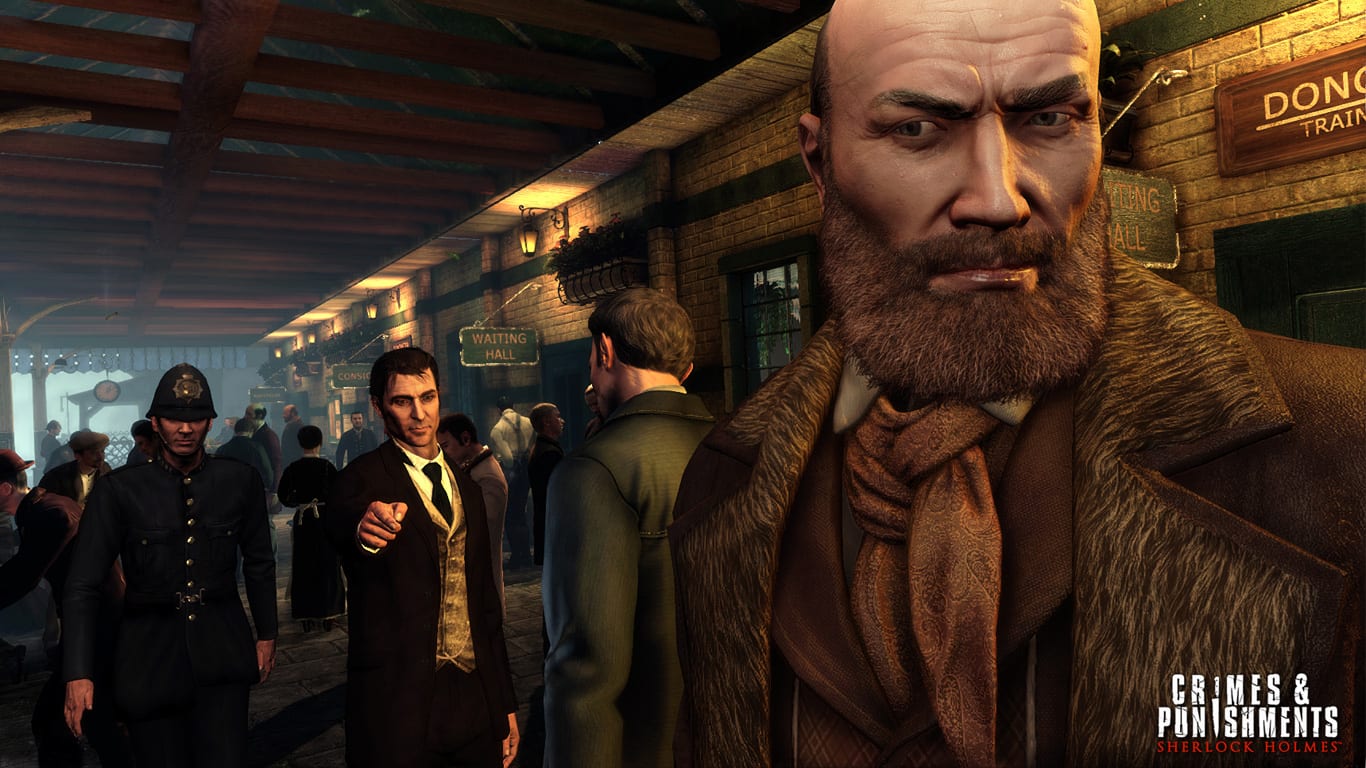 I have deduced that man has a beard.

Sherlock Holmes games have been around on different platforms since the beginning of gaming. However, bolstered by the recent popularity of both the Benedict Cumberbatch and Robert Downey Jr. takes on the great detective, Sherlock Holmes is perhaps the most popular he’s been in decades. His latest video game offering, Sherlock Holmes: Crimes & Punishments, is given a high-profile console release and sound technical specs. Is this a game you want to put in your Mind Palace? Let’s find out.

Like most adventure games, Crimes & Punishments is generally based on fairly static environmental interaction, menus and dialogue trees. There’s nothing fancy for you to get used to here as you control Sherlock through both first- and third-person views as you explore crime scenes, gather clues and talk to suspects and witnesses. Special menus, puzzle screens, and quick time events (QTEs) are used for unique interactions throughout each case, but for adventure gamers that aren’t fond of twitch rewards (or, on the other hand, console gamers that hate obtuse puzzles), these can all be skipped without penalty.

Crimes & Punishments is probably the best-looking adventure game ever released. Built on the Unreal engine, this won’t compare with Destiny or other big-name graphical beasts, but the character models certainly look better than, say, Watch Dogs (granted, without the open-world environment). Animations can be a bit stiff and some shadow lighting sometimes oddly bubbles, though mouth sync is generally spot-on.

The main characters (Holmes, Watson, Lestrade) are well voiced with strong work. In fact, almost all of the voice cast works effectively given the time period and tone, though there are some occasional rough recordings by the supporting cast. Sorry ladies (and some gents), this Sherlock appears to be based on the classic Basil Rathbone version, not Cumberbatch’s dashing sociopath.

Traditionally, adventure games have been about finding items and solving puzzles by using those items. The developers at Frogware recognized in the age of online tutorials and help videos, this model is a bit outdated. Their approach, then, is for players to experience the gradual accumulation of clues and information on cases, all leading to an ultimate accusation and sentencing. It’s a twist to the old formula and it works well — Crimes & Punishments feels like the type of adventure game that has evolved into modern sensibility.

There are six different cases for Sherlock to solve, each with varying difficulty (only one is very easy). Adventure game veterans will probably spend 2-to-3 hours on each case, though the mini-games — sometimes annoying, other times frustrating — can be skipped to save time. Cases follow a pretty standard formula of investigation and interrogation, though a pair of them make use of Holmes’ love of disguises (featured in the recent films but not the show).

Frogware has implemented a deduction system inspired by the Mind Palace concept from the BBC take on Sherlock. Each time you question someone, discover a clue, or inspect an item, more elements accumulate in your notes, which ultimately present more options in crafting a deduction. Deductions feed into your actions and lead to case accusations. Clues are discovered by exploring and interacting with the environment, though Sherlock makes things easier with a special vision mode akin to Eagle Vision in the Assassin’s Creed series. Similarly, every time you meet someone, a Character Portrait sequence kicks in, allowing you to identify key traits and clues through up-close observation.

Accusations and their consequences are a major part of the game. Each case has up to five suspects with their own possible motives. At the end of a case, you’ll make an accusation and decide their fate, including covering their tracks if the crime was justified. Based on the ending cut scene for each case, you’ll know if you got the right person. If you’re second guessing yourself, the game allows you to change your choice (or save it for subsequent playthroughs).

Sherlock Holmes may be at an all-time peak in popularity by modern standards, and Crimes & Punishments takes advantage of this by incorporating various elements of recent interpretations into a modernized adventure game. It has its hiccups, but the game executes well enough that it hopefully shows other publishers (*cough* TellTale) that this type of genre is still very much welcome.

Now it’s your turn. Let us know in the comments below what you think about Sherlock Holmes: Crimes & Punishments.

By Mike Chen
Tags: Video Game Review
This entry was posted on Thursday, October 2nd, 2014 at 3:55 pm and is filed under Mike Chen, Video Game Reviews. You can follow any responses to this entry through the RSS 2.0 feed. Both comments and pings are currently closed.