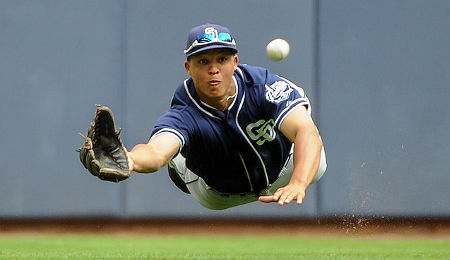 Where did Will Venable’s power go this season? (USATSI)

The Peakers have been a savage disappointment. We selected this team based on the fact that we saw them producing more power than they showed the last season. We knew guys like Troy Tulowitzki and Will Venable were gambles, we’re just glad our wallets didn’t suffer the same kind of negative totals.

Anthony Rizzo (22 points): After clubbing eight homers in July, Rizzo only stroked five long balls in August. His 12 RBI meant zilch thanks to his 21 whiffs.

Freddie Freeman (minus 10 points): Here we have a young player that hits for average so the power should come naturally, right? After all, Freeman did mash 23 homers last season. Unfortunately, while he poked his way to a .330 BA last month, he only managed two long balls. Freeman’s 30 strikeouts were his highest monthly total since September 2012, and that really killed his value in this format.

Jedd Gyorko (two points): Jedd? More like Jerk, the way he teased us with two homers and six RBI in the four games he appeared in at the end of July. August saw him hit .217 (believe it or not, his highest full-month average) with a pair of homers, however, his 15 RBI were faded away by 23 strikeouts.

Todd Frazier (eight points): While Frazier is having a good season by Roto standards, his monthly splits reveal that 20 strikeouts every four weeks are a given. So basically before the start of each new month he is in the red. August saw Frazier crush three long balls with 14 RBI but his 21 strikeouts relegated his monthly total to single digits.

Carlos Santana (three points): June and July saw Santana produce 23 and 40 points respectfully. Well, it seems like the summer heat burned him out as in August just a pair of homers and 13 RBI meant very little next to his 20 whiffs.

Troy Tulowitzki (zero points): Check the hospital or 2014 Fantasy morgue for an update on Tulo.

Yasiel Puig (minus 18 points): For the second month this season, the “Wild Horse” failed to hit a dong. In fact, Puig has just two homers since May. As for August, his 24 strikeouts destroyed his four RBI.

Giancarlo Stanton (22 points): At first glance you see Stanton’s eight homers with 25 RBI and you gush for a brief second… and then you see his 36 strikeouts. In the RotoDerby format Stanton is a popular commodity but with such raw power comes many a whiff.

Bryce Harper (13 points): Entering August, Harper had three homers on the season, so you can imagine our excitement when slashed seven homers in August. However, he only managed 15 RBI, which were mostly washed away by 37 strikeouts.

Will Venable (minus six points): Venable hit 22 homers last season. Serious, he did. But this season he has just six. His sole August blast with five RBI were wiped out by 16 strikeouts for this now part-time player. Venable’s stolen base numbers are also way down, but at he least he stole one recently (see below). What’s that? Steals don’t count in this format? D’oh!

The Peakers now rank well out of the money at 479th place.

Now it’s your turn. Let us know in the comments below what you think of RotoDerby.

Crave more in-depth Fantasy analysis? Then join us every Thursday at 9 p.m. EST for RotoRob Fantasy Baseball Weekly Podcast on Blogtalkradio as we entertain and edify you for an hour or more each week. We’ll be off this week, but return September 11 with special guest Peter Kreutzer of AskRotoman.com. Tune in here.

By Josh Johnson
This entry was posted on Wednesday, September 3rd, 2014 at 11:04 pm and is filed under BASEBALL, Fantasy Leagues, Josh Johnson. You can follow any responses to this entry through the RSS 2.0 feed. You can leave a response, or trackback from your own site.