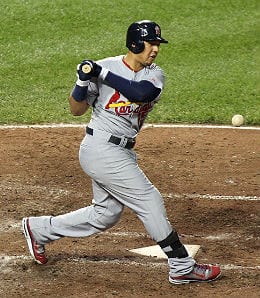 Last week, we opined that the Fantasy world should jump on board the Mike Fiers bandwagon, and he has yet to disappoint. Now, it’s another NL Central spark-plug that should have your attention, as Jon Jay is heating up along with St. Louis’ offense. Now let’s have a look at this week’s Wire Troll recommendations.

Jon Jay, CF, St. Louis Cardinals (ESPN: 32 per cent owned; CBS: 20 per cent): So let’s get this straight: Jay had a 12-game hitting streak entering St. Louis’ weekend series in Philadelphia, and has hit safely in 13 of his last 14 games, yet is still lying out there on the waiver wire? He is having an absurd August, hitting .407 with a just-as-eye-popping 1070 OPS. No, Jay doesn’t bring any pop to the table (three home runs), but his season average is up to .309, with 37 RBI and an OPS of 781. Heading into the season, we slotted Jay 109th in our Outfield Rankings, but the fact is he’s currently playing at a top 60 level. Given Jay’s ascension, it’s no coincidence the pitching-rich Cardinals are suddenly surging. Let’s just hope he can avoid getting doubled up like he was on Wednesday (see video below).

David Freese, 3B, Los Angeles Angels (ESPN: 8 per cent owned; CBS: 20 per cent): Jay’s good friend Freese is starting to show the Angels what the Cardinals got glimpses of prior to trading him. Mr. October (2011) has turned it around after a very slow start, posting a .300 average in August with seven RBI. His season numbers are pedestrian (.259, six homers, 41 RBI), but when you consider he was hitting just .203 at the end of May, his stock is headed in the right direction.

Carlos Carrasco, SP, Cleveland Indians (ESPN: 23 per cent owned; CBS: 43 per cent): Carrasco is getting yet another crack at the starting rotation in Cleveland and is making the most of it. He continued a phenomenal August on Friday against Houston by allowing just one run over six innings. For the month, the 27-year-old is 2-0 with a 1.96 ERA and 22 strikeouts in 23 innings. Carrasco has never been harder to hit (.216 BAA), and his FIP and xFIP are both supporting his ERA, so luck is not a factor here.

Avisail Garcia, RF, Chicago White Sox (ESPN: 11 per cent owned; CBS: 45 per cent): Another player we thought might break out this year, Garcia is finally healthy and ready to roll. Known as “Little Miggy” in Detroit for his resemblance to former teammate Miguel Cabrera, Garcia has a world of potential. A seven-game sample may not send the Fantasy world scrambling to grab him, but he has a homer and six RBI since being activated. Assuming Jose Abreu doesn’t steal all of Garcia’s RBI chances, we think he will have plenty of opportunities to drive home runs for the South Siders.

Eric Stults, SP, San Diego Padres (ESPN: 0.3 per cent owned; CBS: 12 per cent): Stults was a punching bag for hitters most of this season, but lately, the southpaw has turned the tables on foes. His four August starts have been terrific (3-0 with a 1.46 ERA, no more than two earned runs allowed in any of them). Mind you, Stults was 3-13 with a 5.22 ERA entering the month, but he looks like a different pitcher over the past few weeks thanks to a sudden stinginess with the long ball.

Kevin Quackenbush, RP, San Diego Padres (ESPN: 0.5 per cent owned; CBS: 6 per cent): The only thing we love more than Quackenbush’s name is his legendary beard, which may trump that of the entire Red Sox team from last year. With Joaquin Benoit currently hurting, Quackenbush is getting a chance to close for the Friars for the next few days. And San Diego will be in good hands — the Quack (we’ll see if that sticks) had allowed just four hits over 6 2/3 scoreless innings over his last seven games before being touched up for a three-run homer in Arizona on Saturday.

Kris Negron, 2B, Cincinnati Reds (ESPN: 3 per cent owned; CBS: 6 per cent): Okay, we know, Brandon Phillips is back. But Zack Cozart has been downright lethargic this season, so don’t count out Negron finding his way into the lineup throughout the rest of the season. In just 29 games, Negron is batting .284 with four homers and 12 RBI.

Jordan Schafer, CF, Minnesota Twins (ESPN: 4 per cent owned; CBS: 5 per cent): It didn’t quite work out for Schafer in Atlanta, but he appears to be having fun running around — literally — in the Twin Cities. Schafer, acquired by the Twins at the trade deadline, has 23 stolen bases on the year, eight coming with Minnesota in just 17 games. He has hit a little bit also, batting .292 with four RBIs over his last 14 games. It’s a small sample size, but Schafer looks like a far more productive player as a Twin than as Brave.

Tsuyoshi Wada, SP, Chicago Cubs (ESPN: 16.9 per cent; CBS: 42 per cent): Six weeks ago, we recommended Wada, but he’s still widely available — especially in ESPN leagues. The southpaw will take on B-More Sunday, seeking his sixth straight start with less than three runs allowed. The “rookie” has ridden some very nice control to a 2.75 ERA through 39 1/3 IP.

Now it’s your turn. Let is know in the comments below who your favourite Fantasy baseball waiver wire pick of the week is.

By Michael Seff
This entry was posted on Sunday, August 24th, 2014 at 1:55 pm and is filed under BASEBALL, Michael Seff, The Wire Troll. You can follow any responses to this entry through the RSS 2.0 feed. You can leave a response, or trackback from your own site.