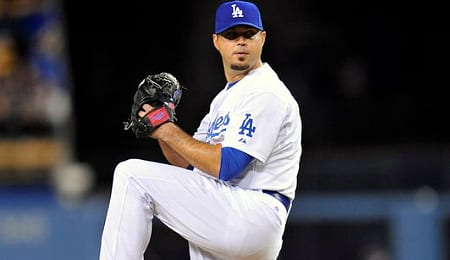 Last week, we wrote a review of Draftster.com. Today, we’ll offer up some tips for play on for Tuesday, July 22 on Draftster.com.

Other than a poor May, outfielder Jacoby Ellsbury has generally been paying off for the Yankees so far, going 2-for-4 with a homer Monday to jack his BA up to .291, thanks to a .395 roll over the last nine games. And lately, he’s been smacking the Rangers around (10-for-23 in the last five games), so go ahead and invest the $9,200 it will take to land him.

Looking for an even bigger bargain in the outfield? How about San Franciso’s Hunter Pence ($5,100)? After going 3-for-5 with a triple, two RBI and a steal Monday, he’s now 7-for-14 over the last three games. Pence has particularly excelled when hitting out of the leadoff spot, going 20-for-59 (.339). Oh, and guess who now leads the NL in mutli-hit games? Troy Tulowitzki? Nope. Andrew McCutchen? Wrong again. It’s Pence, with 37 such games to his credit already. This is as good as Pence has looked since that phenomenal third of a season after he was traded to the Phillies in 2011.

Boston’s Mike Napoli won’t come cheap at first base ($6,600), but he is a notoriously streaky hitter, and he’s currently on one of his hot runs. He’s gone yard in back-to-back games and is 8-for-15 over the last four games. Napoli has certainly had no issues raking against the Jays this year, either (8-for-16).

If you’re going to go big with a starter Tuesday, how about LA’s Josh Beckett ($8,500) in Pittsburgh? Over his last nine starts, he has a 1.74 ERA, giving up two earned runs or less in eight of them. But on the road, Beckett has been untouchable lately, winning his last four starts while failing to surrender a single earned run over 27 innings. Smoking!

Seeking a cheap option at catcher? How about Minnesota’s Kurt Suzuki ($4,600)? He was 3-for-4 with a double and two RBI Monday, raising his BA to .311 with 40 RBI in 289 at-bats. With very little fanfare, Suzuki is putting up career slash line numbers, so if you find yourself stuck at backstop, consider him.

A cheaper shortstop option ($5,400) is Erick Aybar of the Angels, expected to start Tuesday after missing a few games because of a groin injury (he did pinch hit Monday). Prior to the injury, Aybar had a 10-game hitting streak, so perhaps it’s worth it to see if he can keep the good vibes going.

Now it’s your turn. Who would you recommend for daily fantasy baseball play for Tuesday?

By RotoRob
This entry was posted on Tuesday, July 22nd, 2014 at 10:33 am and is filed under BASEBALL, Fantasy Leagues, RotoRob. You can follow any responses to this entry through the RSS 2.0 feed. You can skip to the end and leave a response. Pinging is currently not allowed.