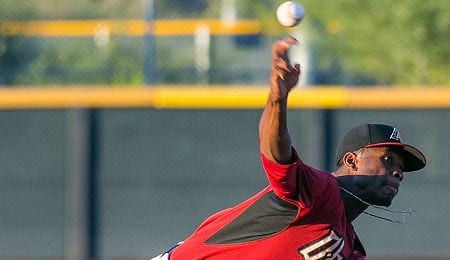 Touki Toussaint had a tough time in his pro debut. (Michael Schennum/azcentral sports)

Our recap of the 2014 MLB Draft wraps up with an analysis of how the National League West teams did this past June.

The Skinny: Touissant was a very intriguing name heading into the draft, and the Haitian-born righty has a power arm but needs to develop his secondary pitches. Like Touissant, Wilson is 6’3”, but weighs just 175 pounds and needs to complement his velocity by adding bulk to his frame to become more durable. Diaz is coming off one of the most impressive offensive seasons in Western Massachusetts high school history, but he profiles better as second baseman.

Bottom Line: Touissant will make or break this class. He has tremendous ability (see video below) but how he develops remains to be seen. Cody Reed was a second-round pick who has added some velocity to his southpaw arm.

The Skinny: The Rox have a possible gem in Freeland, who improved vastly in 2014 with an outrageous 128-to-13 K-to-BB ratio and has continued to dominate since turning pro. He has a deceptive delivery, making his low-90s fastball look faster. Wall is a prominent hitter who slipped in the draft because of two different shoulder issues. Castellani is a polished pitcher who relies more on getting groundball outs than the K.

Bottom Line: Freeland and Castellani have a chance to be front-of-the-rotation arms, and Wall’s health will go a long way towards determining whether he’ll be swatting balls out of Coors Field any time soon. If nothing else, this is a class that presents a ton of upside.

The Skinny: The Dodgers added some quality players to an already deep farm system. Holmes has an electric arm capable of touching triple digits with his heater and he complements that with a power curveball. Verdugo is a solid pitcher with room to grow because he is just now focusing solely on the mound rather than being a two-way player. Brigham has some health concerns but also a high-90s fastball and good groundball-inducing ability.

Bottom Line: The Dodgers came up with another excellent draft, at least on paper. Because of the success of the Major League club, these youngsters should have time to develop properly, even if they are in a crowded group of prospects.

The Skinny: Turner is considered by some to be the best position player in this year’s draft, a tremendous speedster with great contact skills. Though he needs to cut down on his swing, he profiles as an on-base machine. Gettys is a speedy outfielder with a tremendous arm that has also made him an outstanding pitcher. Lemond stepped up big for Rice in setting a school record with 14 saves last season.

Bottom Line: Turner, Gettys and Lemond are all possible studs that represent hope for a Padres franchise in search of some stability. It could take a few years, but this trio represents a bright future for San Diego.

The Skinny: Beede is no stranger to being picked in the first round considering he was taken 21st overall in the 2011 draft. It’ll come down to control for the hard-throwing Beede, who also features a tremendous curveball. Garcia experienced a rise in his draft stock when he won the 2013 Sun Belt Commissioner’s Award and is a smart, polished backstop. Davis is a power-hitter with a strong outfield arm, but what makes him all the more intriguing is a mid-90s fastball on the mound.

Bottom Line: The Giants seem to find success in their drafts in all rounds, but they have plenty to work with in this year’s top selections. True to its nature, San Francisco selected talented players that are also smart and team-oriented, so Beede, Garcia and Davis all should help out sooner rather than later.

Now it’s your turn. Let us know in the comments below how you think your favourite NL West team did in the draft.

Crave more in-depth Fantasy analysis? Then join us every Thursday at 9 p.m. EST for RotoRob Fantasy Baseball Weekly Podcast on Blogtalkradio as we entertain and edify you for an hour or more each week. RotoRob’s guest next week will be Pattonandco’s Tim McLeod. Tune in here.

In fact, after catching in the low minors, Schwarber was playing left field exclusively by the time he got to High-A Daytona. Stinnett has improved since being taken in the late rounds by the Pirates last year, as the 6’4” righty has a power arm but may be more suited to be a reliever at this point because of mechanical concerns. Sands, on the other hand, is much more consistent at repeating his delivery and can reach the mid-90s with his fastball. He also features a very good 12-to-6 curve.

Anderson, committed to Southern Miss, is more of a defensive catcher at the moment, but could develop his power if he adds some bulk to his 6’3”, 180-pound frame. Twine is a rather intriguing prospect. He was considered one of the best Texas high school running quarterbacks, once rushing for 534 yards in a single game. Also a track star, Twine has premier speed and athleticism, and now needs to find a way to translate that into stardom on the baseball diamond.

What once appeared to be an embarrassment of riches for the Astros has turned into flat-out embarrassment. Aiken will not don an Astros uniform after a failed post-Draft physical sent everything spiraling and the Astros never got him signed before the deadline. That will put more significance on the development of their other top picks, including Fisher, a fast-improving hitter who was a sixth-round pick by the Rangers in 2011.

The 2014 Major League Baseball Draft is officially in our rear-view mirror, but the time to analyze is just beginning. It may take years for the picture to fully come into focus, but why not break down the picks now? That’s what we’re here for, less than a month after the fact. We examine now, division-by-division, each team’s draft class and hand out grades for their selections.