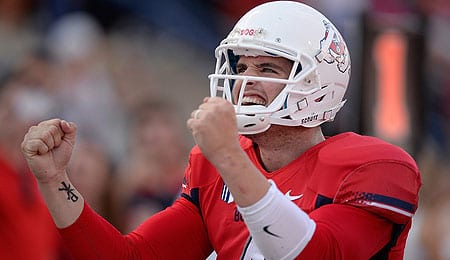 Derek Carr is stoked to be a Raider. (Guardianlv.com)

Yeah, yeah… we get it. Grading a draft before any of these players steps onto an NFL field is a bit silly. But why else would we spend so much time studying and grading prospects if not to be able to commend or criticize teams’ Draft Day performances? While time may be the final judge of these draft classes, we’ll take a crack at being the first to pass judgment, based on our obviously impeccable draft boards.

Not only did the Raiders pass on a quarterback with the No. 5 pick (remember that the next quarterback wasn’t taken until No. 22), but they got the passer they wanted all along in Round Two in Derek Carr (Fresno State Bulldogs). This was a major steal, considering in our final Mock Draft we thought Carr would go as high as eighth overall. Having Matt Schaub around will allow Oakland to give Carr some time to learn the offense before getting thrown to the wolves (we know Carr can take a little ribbing, as you can see in the video below, but can he take an NFL pounding? Time will tell.)

Strong-armed Tom Savage (Pittsburgh Panthers) could compete with Ryan Fitzpatrick for playing time, and even if both quarterbacks fail miserably, the team added some nice pieces to help whoever is throwing passes in 2015… Marcus Mariota (Oregon Ducks) perhaps?

One of the most active teams in the 2014 draft had to be the Minnesota Vikings. First they flat out stole a fifth round pick from the Browns to move down one spot where they still came away with linebacker Anthony Barr (UCLA Bruins), who along with third round pick defensive end Scott Crichton (Oregon State Beavers) fills a big hole in the pass rushing department after the loss of 32-year-old Jared Allen to the Chicago Bears.

Pre-draft, we felt like the only remaining passengers on the Teddy Bridgewater bandwagon, so obviously the move to trade up to the final pick in Round One to take the most pro-ready signal caller in this draft is one the RotoRob.com crew will applaud.

Aside from wisely passing on Johnny Football and grabbing versatile offensive lineman Zach Martin (Notre Dame Fighting Irish) at pick No. 16, the Cowboys’ draft left us scratching our heads. Trading their third round pick to the hated Redskins to move up only 13 spots in Round Two in order to reach for defensive end/linebacker ‘tweener Demarcus Lawrence (Boise State Broncos) was not a wise move for a team lacking quality depth across the roster.

The window of opportunity appears to be closing on the Patriots as Tom Brady gets older, so we thought Coach Bill Belichick would use this draft to load up for one more Super Bowl push, but instead they drafted like a team in rebuilding mode. Defensive tackle Dominique Easley (Florida Gators) may be the only player to have an impact in year one, as New England was without a selection in the third round and took quarterback Jimmy Garoppolo (Eastern Illinois Panthers) in the second.

Putting the Eagles on this list was a tough call since we really liked the addition of wide receivers Jordan Matthews (Vanderbilt Commodores) and Josh Huff (Oregon Ducks). However, Philadelphia had a golden opportunity to improve a weak secondary in the first round when cornerback Darqueze Dennard (Michigan State Spartans) practically fell into its lap. Then, much to the dismay of our friend Mark T. Wilson (TruLuvSportsTalk), who joined us for our first ever live Draft coverage on the RotoRob Fantasy Football Weekly Podcast, Coach Chip Kelly instead opted to trade back, leaving the Eagles unable to address the defensive backfield until Day Three. Passing on Dennard could come back to haunt Philly in a pass-happy NFC East.

We’ve been accused in the past of excessively hating on the Browns. We actually have nothing against the team, but they just can’t seem to get anything right and this draft was no exception. While he may turn out to be a good player, wasting a pick to move up one draft slot for cornerback Justin Gilbert (Oklahoma State Cowboys) was probably unnecessary. Later in the round, Cleveland moved up to draft its latest (future) bust quarterback, the suddenly weapon-less Johnny Manziel (Texas A&M Aggies). Just business as usual for this downtrodden franchise. Couple those moves with the news that star wide receiver Josh Gordon could be facing a year-long suspension and the Browns are far and away our biggest losers of the 2014 NFL Draft.

Now it’s your turn. Let us know in the comments below who you thought did well in the 2014 NFL Draft and who bombed.

By Nick Wagner
This entry was posted on Wednesday, May 14th, 2014 at 11:44 pm and is filed under Draft report, FOOTBALL, Nick Wagner. You can follow any responses to this entry through the RSS 2.0 feed. You can skip to the end and leave a response. Pinging is currently not allowed.