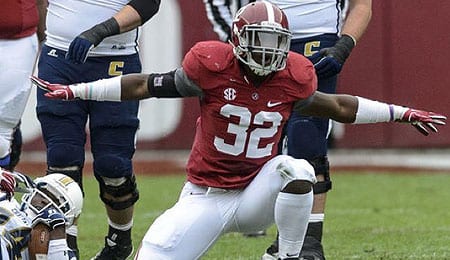 C.J. Mosley, an inside linebacker out of Alabama, went 17th overall to the Ravens. (Baltimoresportsandlife.com)

On this week’s episode of RotoRob Fantasy Football Weekly Podcast (normally heard every Wednesday at 1:30 p.m. on Blogtalkradio), we broadcast live for two hours to cover Round One of the NFL Draft. It was frantic 120 minutes and the trades really cramped our flow. We hung tough… and then Minnesota sneaked back into Round One.

Here are some highlights:

Click the play button below to enjoy all the Fantasy football fun and frivolity! Next week, we got 30-year veteran NFL writer Russell S. Baxter (Profootballguru.com), who was at the draft. We will return to our normal slot on Wednesday at 1:30 p.m. EST.

Now it’s your turn. Let us know what you thought of our first round analysis in the comments below.

By Josh Johnson
This entry was posted on Friday, May 9th, 2014 at 11:34 pm and is filed under FOOTBALL, Josh Johnson, Michael Seff, Nick Wagner, Podcast, RotoRob, RotoRob Fantasy Football Weekly. You can follow any responses to this entry through the RSS 2.0 feed. You can skip to the end and leave a response. Pinging is currently not allowed.