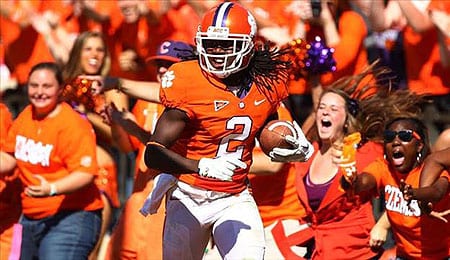 Many believe Sammy Watkins is ticketed to Oakland in the draft. (Standingosports.com)

On this week’s episode of RotoRob Fantasy Football Weekly Podcast, heard every Wednesday at 1:30 p.m. EST on Blogtalkradio (although note next week’s special day and time below), Nick Wagner and Josh Johnson were joined by Erik Kuselias of NBC Sports and ProFootballtalk.com. New RotoRob writer Michael Seff also stopped by to chat about the Panthers.

Click the play button below to enjoy all the Fantasy football fun and frivolity! For next week’s Podcast we’ll shift days and time to broadcast live during the NFL Draft on Thursday May 8 at 9 p.m. EST. Call in and rant to us (347-826-7358) about your team’s pick.

Now it’s your turn. Let us know in the comments below whether you agree or disagree with our assertions.

By Josh Johnson
This entry was posted on Thursday, May 1st, 2014 at 12:57 pm and is filed under FOOTBALL, Josh Johnson, Michael Seff, Nick Wagner, Podcast, RotoRob Fantasy Football Weekly. You can follow any responses to this entry through the RSS 2.0 feed. You can leave a response, or trackback from your own site.