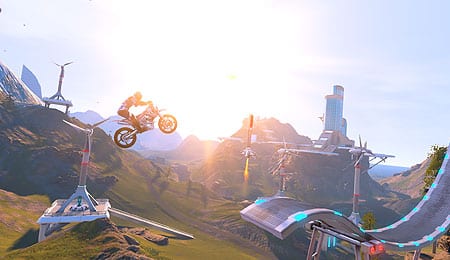 Visually, Trials Fusion is a big step up over its predecessors.

After releasing a pair of highly regarded Xbox Live Arcade exclusives, RedLynx and Ubisoft are going multi-platform with their latest effort, Trials Fusion. Although added availability is great, the third installment in the Trials series is more expensive than the previous ones while maintaining the same core elements. So, is it worth the new price? Let’s take it for a spin and find out.

Simple, tight handling is a staple of past Trials games, and it’s on point once again in Fusion. To be clear, the game demands a very high level of precision, it just doesn’t ask you to memorize anything beyond gas, brake and lean to achieve it. There’s also an all-new trick system in place. It initially feels a little finicky messing with the analog sticks to pull off crazy stunts — so much so that we had some trouble with the tutorial because we’d keep executing the wrong moves — but it gets better with practice and is a solid addition that provides even more incentive to go back and replay tracks.

Outputting in 1080p and running at a smooth 60 frames per second on the PlayStation 4, Trials Fusion is easily the best looking game in the series. Level design is suitably over the top with absurd locations, loads of explosions and scripted set pieces that make your runs memorable. The in-game physics are finely tuned and lend weight to every movement, and the ragdoll effect that accompanies your inevitable crashes bring a little levity to otherwise frustrating situations.

Audio isn’t as strong, however, with forgettable tunes and unremarkable voice work. There’s nothing truly bad, and we never came close to muting (or even turning down) the TV, but we never felt like it added much to the presentation, either.

If you’ve played either of the previous games you’ll recognize the basic progression system as each track offers the chance to earn three medals based on your performance. Successfully completing it nets you a bronze, while silver and gold require you to beat time and/or crash thresholds; for example, a gold might require you to finish a track in less than 50 seconds without wiping out.

Your medal total is then used to unlock additional circuits. That means you can’t simply complete all the races and move along. Instead, you’ll need to secure some silver and gold medals as well to advance to the next series. In a lot of ways it makes sense as — if you’re not good enough to earn anything higher than bronze — odds are you aren’t ready for the progressively tougher tracks. It can be frustrating, though, when you end up running the same tracks repeatedly in an attempt to unlock more.

New tracks aren’t the only thing you’ll unlock, as you’ll also gain access to additional bikes and earn money to buy new gear and customize your rides. While the customization is purely superficial, adding more bikes to your garage can provide more tangible rewards as it’s easier to rerun old tracks and score higher with a superior machine — although some tracks are only available to specific bikes.

Beyond racing for medals, each track contains three challenges. These are fairly diverse and will push your limits. The reward (extra experience) is paltry, though, which is a little disappointing given just how tough some of these things are to pull off. Of course, given that they’re entirely optional it’s hard to complain too much.

In fact, our biggest complaint stems from the track progression itself. While many games continue to up the ante with more and bigger, Trials Fusion just continually cranks up the difficulty in ways that make later tracks less fun to play. This is most evident with how tougher tracks lose a lot of the openness and grandeur that earlier ones possess. Even competent runs later on lack the kind of flow that you’d expect from a game built (at least initially) on speed and gravity-defying jumps. It’s like the racing was pushed aside in favour of a punishing platformer.

Along with the 40-plus available tracks, there are also a number of mini games available in career mode as well as a robust track designer. It’s not the most user friendly interface ever, and, quite frankly, we lack the requisite creativity to do much with it anyway. Thankfully, others do not suffer the same affliction, and it’s very easy to locate, download and race on interesting user-created content. This kind of thing adds tons of replay value to a game that already features quite a bit.

Multiplayer might be a sore spot for some people, at least initially, as Trials Fusion does not support online play (or even ghost runs) at this time. That functionality has been promised down the road in a free update, but that’s a risky proposition as there’s no way to tell: a. how well it’ll function; and b. how active the Trials community will be whenever it’s finally added. So, if being able to play the game with friends online is a key selling point, you may want to take a wait-and-see approach.

Trials Fusion can be incredibly frustrating and extremely rewarding, often times within moments of one another. It’s well designed and content rich, but it requires patience and perseverance in equal measure to appreciate what it has to offer. If you enjoy the core concept and are capable of shaking off dozens of failures to bask in that ultimate success, then Fusion belongs in your collection.

Now it’s your turn. Let us know in the comments below what your impressions are of this game.

By Herija Green
Tags: Xbox Live Arcade
This entry was posted on Tuesday, April 22nd, 2014 at 3:36 pm and is filed under Herija Green, Motorcyle Racing, Video Game Reviews. You can follow any responses to this entry through the RSS 2.0 feed. Both comments and pings are currently closed.