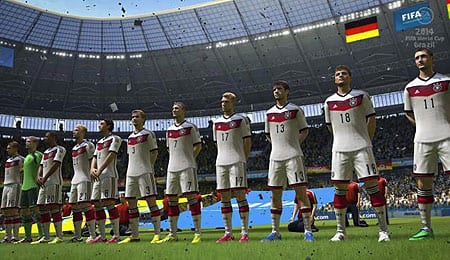 The FIFA 14 experience is now dressed up in World Cup duds.

Just as EA Sports did in 2010, the video game behemoth is ready to offer a companion piece to the ultra-popular FIFA series with the FIFA World Cup set to take over Brazil in a few weeks. 2014 FIFA World Cup streamlines the series experience, distilling it down to a strict focus on the world’s most popular tournament. But at US$59.99, is it really worth the price of entry?

For the primary FIFA game, resources have to be spread out across teams, leagues, and players. Not so with 2014 FIFA World Cup, as things receive a shiny coat of paint. It all starts with the menu interface, which has been re-skinned to reflect the theme of Brazil. Stadiums seem to be more detailed and alive, and you’ll find authentic replicas of the official dozen 2014 World Cup stadiums, along with regional stadiums for team qualifications. One cool new feature is a cutaway to celebrations in home countries, something that could be propagated into all sorts of EA Sports properties.

Other additions include dedicated national fan celebrations, real-world managers (though some of them certainly act out of character), and a slightly improved level of detail and animation when compared to the PS3/Xbox 360 versions of FIFA 14. However, if you’ve already launched ahead with PS4/Xbox One, you’ll definitely notice a downgrade in character models, lighting, and environments.

2014 FIFA World Cup is built on the Impact Engine, which means that it plays essentially the same as the primary FIFA 14 game. There have been some minor tweaks to make the game more accessible to casual players, probably to try to entice non-gamers who happen to get caught up in World Cup fever. Dribbling and first-touch are “improved” (easier), and the skillset of teams has naturally improved simply by being talent-heavy national teams rather than random teams from regional leagues. New tactics and a penalty shoot-out system have also been implemented.

However, as part of this accessibility, things do seem a little dumbed down. It’s the equivalent of changing the game difficulty from Normal to Easy, and while it makes it more fun to pick up and go for newbies, veteran FIFA players will notice this. In addition, the AI can be a little off at times, though this may have been designed to create more flow in the game.

As with the graphics, gameplay options are essentially a re-skin of existing modes, just with a World Cup focus. This isn’t necessarily a bad thing, but it’s important to keep your expectations in check — at its very core, this full-priced package is essentially FIFA 14 with different teams and a different tournament. Road To The FIFA World Cup is probably going to give you the most traction, as it allows you to pick from 203 national teams and play from qualification to the World Cup. Captain Your Country is more or less career mode put into World Cup format. The Story of Qualifying lets you replay historic scenarios, while a more real-time version of that will be patched in with the Story of Finals scenarios. Online mode exists here too, allowing you to have international tournaments in the virtual space.

It’s hard to say that this is a cash grab because this will certainly appeal to a specific audience and if you didn’t get FIFA 14, this is a technically sound game with a number of gameplay options. However, if we’re being fair, this feels like it would be much more appropriate as a US$29.99 DLC rather than a full US$59.99 game. There’s simply not enough content or longevity to give it full value, especially when FIFA 15 isn’t that far away.

2014 FIFA World Cup is an unnecessary but enjoyable re-skinning of FIFA 14 for PS3/Xbox 360. Its gameplay tweaks are designed for more casual access, which means when your drunk friends are waiting in between matches, it’s something you can all enjoy together.

Now it’s your turn. Let us know in the comments below whether you think this game is worth the price.

By Mike Chen
Tags: EA Sports
This entry was posted on Friday, April 18th, 2014 at 12:36 pm and is filed under Mike Chen, Soccer, Video Game Reviews. You can follow any responses to this entry through the RSS 2.0 feed. Both comments and pings are currently closed.