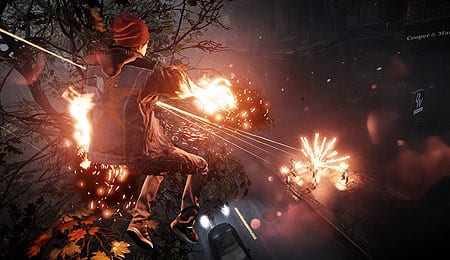 Second Son is the best PS4 exclusive to date.

The Infamous series by Sucker Punch is one of the higher profile Sony exclusives, yet it never quite caught fire the way that Uncharted or LittleBigPlanet did. That will probably change with Infamous: Second Son, which lands on the PS4 as perhaps the biggest release in the system’s fast start. While other console exclusives for this new generation may have been a bit disappointing, PS4 owners don’t have to fear — Sucker Punch has crafted the best game of the series with Second Son.

The first Infamous game felt like a so-so experience until flying was introduced to open up travel across the city, creating an incredible sense of freedom. Fortunately, Second Son doesn’t take long until this power is given to Delsin. This makes exploration a joy, as you can literally go up, over, or through just about anything.

Much of the control scheme carries over from the previous generation. R2 is your primary attack, while L2 allows you to zoom in and aim a little closer. L1 and R1 offer different secondary attacks depending on how your powers are configured. Melee takes its inspiration from Infamous 2’s weapon-based combat, and the square button utilizes Delsin’s power-infused chain. In fact, that aspect of things is one of our few complaints — melee doesn’t really evolve much, and Sucker Punch could have enhanced this with God Of War-style combos.

Climbing and parkour can be a touch sensitive. In some games, parkour tends to be lumbering and cumbersome. Infamous has always been light and floaty with its jumping/climbing/flying, and you’ll sometimes find Delsin passing over objects instead of landing on them. Of course, there’s more leeway since Delsin can fly, but this can still be occasionally frustrating.

Second Son makes use of the touchpad, which is somewhat gimmicky. Rather than push in both analog sticks to restore power, you press in the touchpad. In addition, doors and other objects are moved by swiping the touchpad. It’s not good or bad, but it does feel a bit forced. What works better is the game’s spray paint mechanic for its tagging mini-game — the PS4 controller goes vertical and the game uses motion controls to aim the spray paint can. This feels natural and is a fun short distraction from the action.

The first Infamous game looked a bit rough; the second one improved on things, but Second Son truly makes a statement for the PS4. The first thing you’ll notice about Second Son is that the lighting is certainly next-gen. The game starts off small in scope as it introduces movement and powers. Within an hour, you’re busting into Seattle, battling armed guards, and flinging powers left and right. From environmental lighting to the detail of the urban sprawl to the brilliant smoke and power effects, Second Son is a visual feast. The game unfolds its abilities in layers, and when there’s a major shift in powers about 4-to-5 hours in, the visuals take a hard left as well, opening up further impressive details.

One of the major differences with Second Son is that the graphics are sharp both up front and at a distance. The city of Seattle, though filled with dummy businesses and buildings, is alive and thriving, with traffic, weather, and pedestrians coming alive. The game takes place at different times of the day, and you’ll definitely notice. Our only real complaint comes from camera angles, as sometimes random environment objects (trees, etc.) block the camera while you’re in the middle of an intense fight.

Previous Infamous protagonist Cole McGrath wasn’t particularly memorable; thus, most video game fans knew him simply as “Infamous guy.” Fortunately, Delsin Rowe is served with a better script and a strong actor in Troy Baker (AKA Joel from The Last Of Us and Booker from Bioshock Infinite). Delsin is funnier, more believable, and just a much more likable character. The supporting cast is strong as well, making Second Son the most successful of the three games from a voice-acting perspective.

Infamous games have always done a great job at making you feel like a custom superhero. Flying, using powers, and fighting bad guys are all par for the course. The only real difference with Second Son is that everything just feels better when you do it. Part of this is polish on the part of the developers, and the other part is the significant graphical upgrade with the PS4. However, the game takes a major leap forward when it comes to powers. Since this hasn’t really been shown in trailers or commercials, we won’t go into specifics — the spoiler-free way to put it is that there’s simply more to it than what you’ve seen.

The karma system returns, and this often includes black and white decisions, though Infamous has never tried to be a morality simulator a la Heavy Rain. This does create a certain level of replayability, as the main missions begin offering a good/evil split after a few hours. In addition, Delsin’s upgrades are handled by collecting shards to absorb into more powers. The path for your powers depends on whether you’re on a good or evil path, along with the your level (which builds up with the number of enemies you take out).

The main campaign on its own lasts 12-to-15 hours, though there’s plenty in this fake Seattle to keep you occupied. Side quests involve any number of tasks — beating up street musicians gives you bad karma, while busting drug deals gives you good karma. The level of enemy control in each of the game’s districts is tracked by a percentage, and many different things can help lower this: destroying security cameras, making spray-paint art, hunting down secret agents, destroying DUP facilities, and more. The more you liberate a district, the fewer confrontations you’ll deal with while traveling.

The most important part of all of this is that it’s all well executed and fun. The game throws so much variety at you, whether it’s powers and combat creativity or side quests, that there’s always something to do to keep things interesting. And the ability to go back and play as good or evil means that there’s plenty of life, even after you’ve finished everything.

Infamous: Second Son is the best PS4 exclusive out there and improves on everything from the excellent Infamous 2. Graphically stunning, creative, and just plain fun, if you own a PS4, you owe it to yourself to pick this up.

Now it’s your turn. Let us know what you thought of this title in the comments below.

By Mike Chen
This entry was posted on Tuesday, April 8th, 2014 at 2:55 pm and is filed under Mike Chen, Video Game Reviews. You can follow any responses to this entry through the RSS 2.0 feed. You can skip to the end and leave a response. Pinging is currently not allowed.