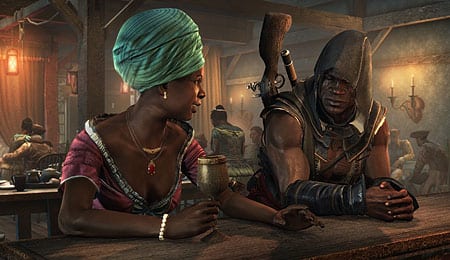 Unlike Assassin’s Creed III, which split The Tyranny of King Washington into three installments, Black Flag’s story-driven DLC is a singular download. Entitled Freedom Cry, the add-on follows the adventures of Edward Kenway’s one-time quartermaster, Adewale, who finds himself stranded in the town of Port-au-Prince. It’s here he encounters a slave trade in full swing, and it doesn’t take long for the now fully-trained assassin to link up with the resistance.

It’s delicate subject matter for an action-adventure series like Assassin’s Creed, though it rarely gets too raw with the notable exception of a slave ship that’s intentionally sunk. Instead we get the usual assortment of AC missions — trail this character, eavesdrop on this conversation, eliminate that target — with a couple of notable tweaks.

Throughout Freedom Cry you’ll have the opportunity to liberate slaves. This takes one of three forms: slave ships (board them on the water), plantations (kill the overseers to free them) and events like auctions or runaways. While most of it is optional, some missions won’t unlock until you’ve freed a certain number or a specific locale. There are also two subsets with regular slaves, which are far more plentiful, and would-be freedom fighters (known as Maroons).

Like the main game, Adewale has access to a ship, which can be upgraded. It’s a much faster process, though, with fewer tiers available and less resources needed. Many upgrades are also achieved by simply liberating slaves. The result is that you end up with lots of money and resources that have no purpose — in fact, free ammo is one of the perks for freeing a number of Maroons — which eliminates one of the rewards for exploration.

Speaking of which, Freedom Cry is absolutely a more limiting experience than the main game. The vast majority of the action takes place in Port-au-Prince, and the primary missions never deviate far from the objectives you’ve seen in AC games for years now. That, combined with a reduced scope and limited upgrade options, make this DLC feel more streamlined.

Technical issues cropped up far more often as well. There were moments when we’d walk into an area with no one only to have a half-dozen alerted guards literally materialize in front of our eyes, which sent us plunging into combat. We also had Adewale sink into the ground and get locked into some animations, including a particularly annoying one in which he kept popping into the air every few steps. Most of them eventually sorted themselves out without the need of a reboot, but the DLC did freeze on us a couple of times.

Although it tackles a far more mature subject than the main game, Freedom Cry doesn’t do anything different from a gameplay perspective, and it restricts exploration, which was one of Black Flag’s true strengths. Nonetheless, for US$9.99 it carries enough quality content to be well worth a purchase.

By Herija Green
This entry was posted on Monday, January 13th, 2014 at 5:34 pm and is filed under Herija Green, Video Game Reviews. You can follow any responses to this entry through the RSS 2.0 feed. You can leave a response, or trackback from your own site.