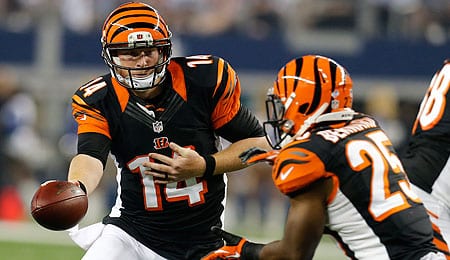 As you inch ever closer to that elusive title of Fantasy football league champion, it becomes that much more important to make sure every move is the right one. Soon you will be crowned, but until then let us help you secure that top spot you so richly deserve. Let’s get to our Week 15 Start ’em, Sit ’em.

Philip Rivers, QB, San Diego Chargers @ DEN: Rivers has been bouncing in and out of the elite QB conversation for some years now, mainly because he has all the makings — the arm, the brains, the moxie, but he just seems to never be able to put it all together. Well a Thursday night prime time game against one of the undisputed elite quarterbacks of our time, Peyton Manning, gives Rivers his biggest opportunity this season to re-insert himself into the elite QB conversation. Given the Denver Broncos’ inconsistent defense lately and the beatdown Rivers put on Peyton’s little bro in Week 14 (see video below), we have a feeling he will not disappoint.

Fred Jackson, RB, Buffalo Bills @ JAC: If Jackson’s rise from his semi-pro indoor football roots to one of the NFL’s better rushers wasn’t storybook enough, add in the fact that he appears to be a humble, blue collar (well, as blue collar as a professional athlete can be) family man and you can easily see why he’s held in such high regard in Buffalo. And with E.J. Manuel coming off a terrible three pick outing, we believe offensive coordinator Nathaniel Hackett will start sharing the city’s sentiment and giving Jackson more play-calling love.

Giovani Bernard, RB, Cincinnati Bengals @ PIT: Despite the fact that the Steelers are so-so against the run, Bernard is gifted and seems to be more comfortable every day. Now, all he has to do is figure out how to steal back some of those goal-line touches from The Firm of BenJarvus Green-Ellis and he will be putting up huge numbers just in time for the championship.

Keenan Allen, WR, San Diego Chargers @ DEN: Allen’s shoulder is a little banged up, but lucky for us Rivers’ arm is just fine and we see them connecting often against an up and down Bronco D.

Dwayne Bowe, WR, Kansas City Chiefs @ OAK: Get next to any Chiefs fan and they will be more than happy to tell you how frustrating Bowe can be. He drops the ball or is bumped off routes way too often for someone of his skill set. However, now that the Chiefs are back to their winning ways after a dominating victory over the Washington Redskins, we think that maybe, just maybe, Bowe will take the rocks out of his gloves and use his size and speed to make a splash.

Zac Stacy, RB, St. Louis Rams vs. NOR: Don’t get us wrong, we don’t think Stacy is a horrible start — if he’s your best option by all means go with him — but we having a feeling that playing a New Orleans Saints squad that’s running on all cylinders will mean that running the ball for the Rams will be a part of the game plan for all of about five minutes and the rest of the time will be spent trying to play catch up.

Hakeem Nicks, WR, New York Giants vs. Seattle Seahawks: It took some some time, but we came up with three reasons to sit Nicks: 1. the Seahawks; 2. the Seahawks and; 3. angry Seahawks, fresh of a loss to division rival San Francisco.

Michael Floyd, WR, Arizona Cardinals @ TEN: Next to the Seattle Seahawks, the Tennessee Titans are the stingiest team against wide receivers, and with Carson Palmer at the helm, there are bound to be picks thrown, which will turn the Cardinals back to their run game. Try to find a better match-up.

Mike Glennon, QB, Tampa Bay Buccaneers vs. SF: What do you get for a top rated defense that has everything? A rookie QB. The San Francisco 49ers shall dine on young Mr. Glennon and it won’t be pretty. We’re going to be scared to look at his stat line Monday, so clearly, we’d advise a bench.

By Vaney Hariri
This entry was posted on Wednesday, December 11th, 2013 at 8:31 pm and is filed under FOOTBALL, Start 'em Sit 'em, Vaney Hariri. You can follow any responses to this entry through the RSS 2.0 feed. You can skip to the end and leave a response. Pinging is currently not allowed.