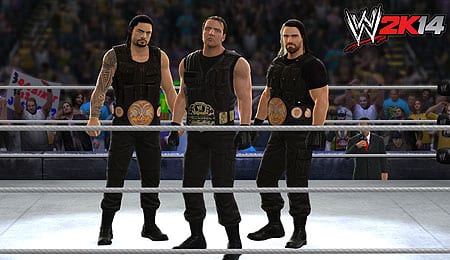 Believe in The Shield.

So, the question becomes is WWE 2k14 a main event entry in the long running series or nothing more than a curtain jerker? Let’s take it to the squared circle and find out.

If you were thinking the name/publisher switch would result in any kind of overhaul, think again. The gameplay basics remain largely untouched with strikes, grapples and finishers all executed the same way. While that all works fine, the countering system is featured more than ever. In theory this could have been a blessing; in practice, it’s more of a curse.

It’s fine to have A.I. opponents counter moves. In fact, it’s necessary… lest bouts become just a series of you pounding your foe into oblivion (or vice versa). In WWE 2k14, however, it’s dramatically overused. This turns some bouts into a series of frustrating moments when the computer seemingly counters two out of every three moves, leaving you with a small window to deliver your own counter. A prompt appears to help (I think) you time up your counters, but I found it to be infuriatingly ineffective and got more mileage out of watching the animations for visual cues to know when to strike.

Previously, counter fests were reserved for higher difficulty settings, but within the game’s signature 30 Years of WrestleMania mode that doesn’t seem to matter. Certain bouts (Randy Savage vs. Rickey Steamboat, Bret Hart vs. Yokozuna, etc.) feel like they were designed to test your patience, unleashing counter after counter regardless of difficulty. There’s a learning curve that wasn’t nearly as steep last year, so those that enjoy that style of challenge should enjoy the change.

While character models and animations don’t look appreciably different from last year, the developers deserve some credit for their handling of the 30 Years mode. The film grain effect on the older matches is very cool, and there’s a lot of attention to detail in recreating how the wrestlers looked at various points in their careers (albeit with a noticeably tighter physique in some cases). There are also some great videos and high production values. These are truly among the great moments in the history of the company, and they are treated with all due reverence.

Commentary is still handled by Jim Ross and Jerry Lawler, and in one of the more interesting decisions the two of them actually repeat lines verbatim from original announcers Gorilla Monsoon and Jesse “The Body” Ventura during past Mania matches. As with last year’s version, when Ross and Lawler are confined to a script the commentary does a nice job of simulating the televised experience. When you flip over to regular matches, though, it’s just as disjointed and confused as ever.

Structurally, the primary mode in WWE 2k14 is very similar to WWE ’13, replacing the Attitude Era with 30 Years of WrestleMania but keeping the same formula. Here you’ll be tasked with replaying some of the classic matches that have taken place at WWE’s “showcase of the immortals.” You’ll start at WM1 with Andre the Giant taking on Big John Studd and go all the way through WM29’s rematch between The Rock and John Cena. There are 45 matches in total, making this a very deep offering.

As noted, however, the mode is highly derivative of last year. Each match is meant to ultimately play out like the real thing, which is accomplished by the inclusion of “historical objectives.” While some of these prove to be optional, most are pre-scripted and all are required if you want to unlock the various outfits, locations and characters. The issue with the historical objectives is that they’re much more enjoyable in a nostalgic sense (assuming you’ve seen the matches) than in terms of gameplay.

That’s partially because they break up flow, but it’s also because they make huge chunks of matches essentially meaningless. For example, part of the Savage-Steamboat script is for Macho Man to nail you with his finisher while the ref is down. That means that no matter how thoroughly you dominate the match, the scripted portion dictates you get injured, which puts the finish in jeopardy. And trust me, it’s not that fun to lose a match in which you landed 90 per cent of the moves.

Then there’s the matter of the counters. More often than not the matches had a reasonable amount of counters, but then there were those in which I couldn’t land a move to save my life. Plus, regardless of how I was performing, it seemed like the computer could get to its feet quicker than me in basically every situation. I’d land 20 moves, the A.I. would land three, and it’d be me lying prone.

All that being said, it’s absolutely worth playing through, and if you’re any kind of a historical wrestling buff you’ll undoubtedly get even more out of it.

Included within the 30 Years is the Undertaker-specific “Beat the Streak.” Here you’ll choose a wrestler and attempt to end the Dead Man’s legendary Mania win streak. You can also play the other side of it by defending the streak. It’s a solid addition.

Beyond that, WWE 2k14 revolves around the open-ended Universe mode — in which you’re free to book cards, start feuds and play (or sim) matches until your heart’s content — and loads of creation tools. These all feel very similar to last year, and we’re definitely ready for another booking-based mode — similar to what was in some of the older SmackDown vs. Raw titles — to find its way into the works. Something that’s completely different and focuses on things like fan support, feud interest and grading the quality of the matches.

Without question, WWE 2k14 does a fantastic job of imbuing a sense of history and nostalgia into the slickly produced 30 Years of WrestleMania mode, effectively bringing the source material to life. I just wish the whole thing played a little smoother, and that so many matches weren’t mired in constantly countering (and being countered by) your opponent.

By Herija Green
Tags: World Wrestling Entertainment
This entry was posted on Saturday, November 23rd, 2013 at 4:16 pm and is filed under Herija Green, Video Game Reviews. You can follow any responses to this entry through the RSS 2.0 feed. Both comments and pings are currently closed.