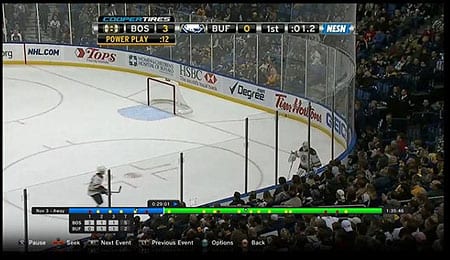 For the past few hockey seasons — yes, even the lockout-shortened one that ran for 48 games — I’ve subscribed to NHL Center Ice through DirecTV. This season, however, that all changes as I go strictly streaming with NHL GamecenterLive. I’ve had GCL before but it’s always been in conjunction with Center Ice, so it’s been more of a supplement if I needed to watch an archived game or highlights, or I was away from our big TV. Not so this season, which puts it in a head-to-head faceoff with its satellite/cable counterpart. Are you weighing which package to get? Here’s what to consider.

First off, it should be noted that the PS3 and XBox 360 GCL apps offer a free service which any sports fan should download. With the free version, it’s basically a semi-HD highlight machine for any game during the season’s history. For hockey fans that hate the lack of highlights on SportsCenter, just fire up GCL for two-to-four minute summaries of the evening’s games.

Cost: GCL is a flat cost of US$149.99 across the board. Center Ice’s price varies, particularly if you order before October 31. However, the cost can go up depending on the provider — you’ll pay at least US$10 more for Center Ice, possible double or triple that depending on where and when you buy.

Home/Away Feeds: DirecTV, Dish Network, and some cable providers offer Center Ice with both home and away feeds. However, other providers only offer home feeds due to bandwidth. GCL lets you pick streaming from either home or away feeds.

Condensed Games: Home late and want to watch the game but don’t have three hours to sit through the entire thing? Condensed games are 10-to-15 minute mini-versions that offer more than just basic highlights. It’s a great way to catch up on the night’s action in a streamlined way.

Watching Options: Television broadcasts require DVR planning to record and watch entire game if you don’t catch it live. With GCL, as long as the game is currently occurring, you can start it either from the beginning or join it live. There are some limitations to this, though (see below).

Timeline Events: If you’re watching an archived game, you’ll optionally see the game’s timeline at the bottom of the screen with significant events bookmarked as points you can jump to. With the trigger buttons, you can scroll through to each event, giving you power over what you want to see.

Video Quality: I’m running standard AT&T DSL and don’t see any drop-off in quality when I stream Netflix or Amazon. With GCL, I get about two minutes of low-quality video/audio until the proper buffer. I’ve experienced similar things with other streaming services, but they usually only last 15 seconds or so. When it’s fully loaded, GCL streams at 720p, plus the hiccups in quality based on your streaming speed. In addition, the framerate can be occasionally choppy. It’s close to HDTV quality broadcasts but not quite there.

Archive Availability: The instant a game’s broadcasts ends, the archive is unavailable for a few hours. With a TV DVR, you can program games that you want to record. Using GCL, you can jump in late on a broadcast but there’s a blackout period for a few hours when both the game archive and the condensed version are unavailable (the highlight packages are available, though).

Blackout Restrictions: Some people get GCL because they want to watch hockey despite not having a satellite or cable package. That’s fine for out-of-market teams, but you won’t be able to watch your home team due to blackout restrictions. As with everything else on the Internet, I’m sure there’s a way around this using proxy servers to falsify locations, but for the 99 per cent of us that don’t know how to do it, it’s a restriction you’ll have to live with. In addition, nationally televised games are not available to watch live. Archived versions of those games aren’t available until 48 hours after the broadcast.

NHL Gamecenter Live works as a fine alternative to Center Ice despite a few technical issues and logistical quirks — and in some cases, people might prefer the flexibility it provides. If you have to choose between the two, it really just depends on whether or not you want the power to DVR a specific game to watch at your leisure or if you don’t mind working around the odd blackout period of a few hours once a broadcast ends. Just keep in mind that you’re not getting your local teams with either package.

By Mike Chen
This entry was posted on Friday, October 18th, 2013 at 3:24 pm and is filed under HOCKEY, Mike Chen, Video Game Reviews. You can follow any responses to this entry through the RSS 2.0 feed. Both comments and pings are currently closed.