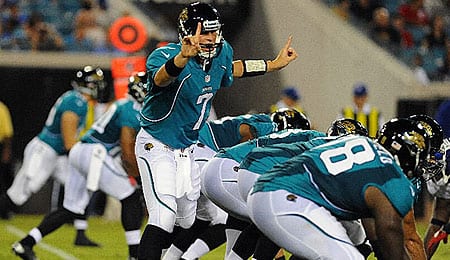 Chad Henne has been written off, but maybe you should take a second look. (Thepenaltyflagblog.com)

Each and every week of the NFL season some random players emerge from depth charts and make an impact. When this happens, fodder is produced for Fantasy owners to debate over. As such, we present to you the Wire Troll for Week Seven.

Sam Bradford, St. Louis Rams: Is it time to trust Bradford? We have been very reluctant to do so. Would you believe only Peyton Manning, Tony Romo and Drew Brees have thrown more TD passes than Bradford’s 13 so far this season? Bradford has also only thrown three picks and lost one fumble. On Sunday, he only needed to complete 12 passes because his defense set up the rest. What is amazing about that is that nine of those completions went to different receivers. Bradford has many weapons in Chris Givens, Austin Pettis and Jared Cook, not to mention Tavon Austin, if we can ever wake him up. With Zac Stacy taking the running back lead the Rams appear charged for a second half run. Bradford is football wise (plus he knows what supplements to take to not get caught — see video below) and he should know what it takes.

Chad Henne, Jacksonville Jaguars: If you are so desperate that you will try anything, let us introduce you to the Chad Henne Show, co-starring Justin Blackmon and Cecil Shorts. Henne can rifle the ball in there and the Blackmon-Shorts combo, when healthy, is no joke. The Jaguars are kind of a laughing stock but Henne deserves a look. Don’t get bogged down by his cons. He is like that plain-looking girl in high school who, upon second glance, had one sweet booty. At first blush, you weren’t interested, but after closer inspection, maybe she was worth a whirl. Henne deserves closer consideration as well, because he’s in the league for a reason, right?

Terrelle Pryor, Oakland Raiders: Yes, we know Oakland is on its bye week. That’s the perfect time to quietly nab Pryor, who had his worst game of the season at Kansas City on Sunday, getting sacked 10 times in the process. Owners will be down on him especially when Oakland hosts the somewhat rejuvenated Pittsburgh Steelers in Week Eight. The good news is Pryor, who has already had one concussion, is still standing. The better news is he will visit renowned QB/pitching tutor Tom House during the bye. House has helped fine tune the mechanics of Nolan Ryan, Randy Johnson, Drew Brees and Tom Brady. So you figure Pryor will emerge from this tutorial either as a flamethrowing hurler capable of pitching well into his 40s or as a Super Bowl winning QB. With that session in tow and a bitter loss on his mind for two weeks, Pryor should be focused for something great.

Joseph Randle, Dallas Cowboys: Run to Randle, many experts will be spouting. Remember he is a rookie, so please don’t overpay for him. Sure, we like Randle very much, but inexperience can be burden. In fact, he had exactly zero touches on the season before filling in for the injured DeMarco Murray on Sunday night. Exercise extreme caution here, and if you own Murray, we understand you have to do what you have to do.

Brandon Jacobs, New York Giants: It has been many moons since Jacobs was Tiki Barber’s touchdown vulture. Yet, Jacobs looked — dare we say — fresh on Thursday. With David Wilson out at least two more weeks, Jacobs should be in line for the majority of the carries. He is the definition of a north-south runner so don’t expect 100-to-150 yard-performances, but one-yard TD runs will be his strength.

T.J. Graham, Buffalo Bills: When teams dig deep into their depth chart for a QB, we as Fantasy owners must look at the WRs deep on the chart as well. We are not saying Thad Lewis and Graham are bosom buddies, we are simply stating that they line up together in practice. Graham is also rooted in this scheme. Therefore, this is a guy who, after four receptions for 74 yards on Sunday, can be super sub when your marquee WR is on a bye.

Riley Cooper, Philadelphia Eagles: As we stated with Graham, Cooper has the same kind of rapport with Eagles backup QB Nick Foles, currently starting for the injured Michael Vick. Cooper did catch a TD pass from Vick in Week Two. However, until Cooper’s four receptions for 120 yards and a touchdown on Sunday, his season highs were two catches and 29 yards. Foles found eight different receivers on Sunday and five of them had multiple receptions. Cooper is a very physical WR with a big mouth and good hands.

Now it’s your turn. Let us know in the comments below who your favourite Fantasy football waiver wire pick up of the week is.

By Josh Johnson
This entry was posted on Tuesday, October 15th, 2013 at 11:11 am and is filed under FOOTBALL, Josh Johnson, The Wire Troll. You can follow any responses to this entry through the RSS 2.0 feed. Both comments and pings are currently closed.