The Wire Troll: Ryan Fitzpatrick Gets Another Chance 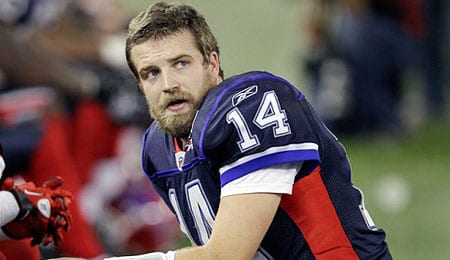 Former Bill Ryan Fitzpatrick finds himself back in a starter role. (Rotoask.com).

Each and every week of the NFL season some random players emerge from depth charts and make an impact. When this happens, fodder is produced for Fantasy dorks to debate over. As such, we present to you the Wire Troll for Week Five.

Ryan Fitzpatrick, Tennessee Titans: With Jake Locker out 4-to-8 weeks with a hip injury (see video below to see what happened to him), Fitzpatrick is certainly a trustworthy option. The Titans draw the undefeated Chiefs at home in Week Five, so starting Fitzpatrick might not be the best decision. Going forward, though, the Titans do face the Rams in Week Nine when Peyton Manning, Matthew Stafford and Colin Kaepernick are on byes. Tennessee also faces the Jags in Week 10 when Tom Brady and Alex Smith are each on byes. Don’t forget Fitzpatrick is a Harvard grad and he threw for at least 3,000 yards the last three seasons with Buffalo, so it’s not as if he’s some unknown.

Brian Hoyer, Cleveland Browns: Has Cleveland found the next Derek Anderson? Yeah, remember Anderson as a Brown? His time was brief but it sure was fun to own him once upon a time. Now, Cleveland fans — who probably felt betrayed after the Trent Richardson deal — have Hoyer, who has produced 590 yards and five touchdowns in his two games. Hoyer also went from throwing three INTs at Minnesota to throwing zero at home against a much better Bengal defense. He’ll get Buffalo on Thursday and with Robert Griffin III and Ben Roethlisberger both on byes, Hoyer will be a hot commodity.

Ryan Tannehill, Miami Dolphins: So Tannehill had a bad game on Monday, but don’t worry, it’s not going to crush him. If he is owned in your league he will now be the fall guy. The best part about that is nobody else will want him either, so he can be had extremely cheap right now. Tannehill committed four turnovers on Monday but at least two of those were not his fault. He’s a warrior and he will bounce back. Okay, so Tannehill is not Drew Brees or Aaron Rodgers, but he is strong and smart kid. The Dolphins will host Buffalo in Week Seven and Tannehill should see some starts with Terrelle Pryor and Brees on byes.

Rashad Jennings, Oakland Raiders: If you drafted Darren McFadden you should already own Jennings. If you don’t, guess what? Jennings is now fresh meat. He started nine games in four seasons in Jacksonville while backing up Maurice Jones-Drew and has career average of 4.3 yards per carry. In Week Four, Jennings filled in for the injured McFadden and gained 45 yards on 15 carries, while catching eight balls for an additional 71 yards. In Week Five, Oakland faces the Chargers, who rank third worst in total defense by giving up an average of 432.2 yards per game.

LaGarrette Blount, New England Patriots: In last week’s Troll, we made the case for Brandon Bolden. This week we will try to sell you on Blount. For the second straight week, Blount led the Pats in rushing yards. Granted, he had 47 of his 64 yards on one play Sunday night against the Falcons. The other downside is he not a pass catcher so non-PPR owners might want to look at Jacquizz Rodgers or Danny Woodhead. So why should trust Blount? Well, the 250-pound north/south Blount has a history as a feature back. He rushed for 1,007 yards in 2010 and another 781 in 2011 while playing for Tampa Bay. He was quietly acquired by New England during the closing rounds of this year’s draft and regardless what they gave up to get him, the Pats don’t make moves for no reason. There was a plan here. Maybe the Shane Vereen injury opened a window for Blount, but he is now forcing his way through.

Alshon Jeffery, Chicago Bears: Jeffery had himself a coming out party in the Week Four loss at Detroit. His 11 targets were the third most behind Brandon Marshall (14) and Martellus Bennett (12) and he finished the game with five receptions for 107 yards and a touchdown. Jeffery also had one rush for 27 yards. The aforementioned Marshall and Bennett are great players and Jay Cutler likes feeding them. Jeffery had just 13 catches for 104 yards in first three games of the season, but after his big day, trust in him has been forged for the future.

Terrance Williams, Dallas Cowboys: Guess what? Miles Austin is hurt. We can’t believe it either… oh wait, yes we can. In steps Williams, the third round pick out of Baylor. On the season, he has 12 receptions on 15 targets for 131 yards. Like with any rookie, growing pains are unavoidable — Williams fumbled in his first start in Week Four, but he did manage seven catches on eight targets for 71 yards. At 6’2″, 200 pounds, he is a medium to tall NFL wideout. His ability and reach are why he is successful. With the brittle old hot rod Austin already dented, Williams stands to see many targets on the same field with Dez Bryant, Jason Witten and DeMarco Murray.

Kenny Stills, New Orleans Saints: This could be an extreme under the radar move, but this rookie has made Lance Moore obsolete. Most NFL WRs are fast, but Stills can fly. His 4.34 40-yard dash at the combine wowed many gawkers. The Saints have Darren Sproles, Jimmy Graham and Marques Colston gathering many targets, so you can bet nobody is game-planning to stop Stills. On the season, Stills has seven receptions on 15 targets for 134 yards. Those numbers are mediocre, but he does have 67-yard catch and he had a season-high six targets in Week Four, which tells us that Brees may be getting comfortable with the kid.

By Josh Johnson
Tags: Minnesota Vikings
This entry was posted on Tuesday, October 1st, 2013 at 2:33 pm and is filed under FOOTBALL, Josh Johnson, The Wire Troll. You can follow any responses to this entry through the RSS 2.0 feed. Both comments and pings are currently closed.