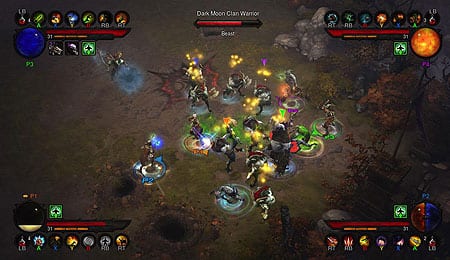 Combat is frequently chaotic in the land of Sanctuary.

In the world of gaming, hacking and slashing are two of my favourite pastimes. Mix them together, blend in some good, old-fashioned loot gathering and character progression and you’re on to something in my book. Thus, I approached the arrival of Diablo III, released in 2012 for PC, on the Xbox 360 and PS3 with no small amount of excitement and anticipation. Is it the action RPG console gamers have been yearning for? Let’s find out.

Making the jump from PC, Diablo III allows you to map six abilities to the face and right-sided buttons. By default these skills are broken up into the game’s six categories: Primary, Secondary, Defensive, Techniques, Focus and Mantras. You are, however, welcome to redistribute them as you see fit by enabling the “elective mode” from the options screen. Rounding out the layout is an evasive roll, used to great effect by flicking the right stick, a target lock and a potion consumption.

How it works is that all Primary attacks not only deal damage but also serve to fill up your spirit meter, which in turn is used to unleash abilities from the other five aforementioned categories — equipped items also assist in regenerating your spirit meter. What this system does is create a certain rhythm to the combat in which you pepper foes with weaker strikes to build up more powerful attacks and buffs.

You’re free to cycle through a selection of skills in each category and change them at will, offering up a fairly customizable approach to fighting. As you progress, more skills will unlock, and within each of them an assortment of five runes is available — these runes supplement your selected abilities with additional properties, such as elemental damage or increased range. Considering the sheer number of foes you’ll be extinguishing, the combat needed to feel effortless, and to that end Diablo III succeeds.

Outside of the cut scenes, which are spectacular, Diablo III isn’t a visual powerhouse. That being said, it succeeds in the two most important areas: (a) No matter how many enemies and spell effects littered my screen the frame rate never dipped; and (b) Every new piece of gear I equipped appeared on the screen in all its legendary glory. Environmental and enemy variety is strong as well, and the fact that so many things are fully destructible makes smashing stuff plenty of fun.

All those spells and foes filling up the screen can make the action difficult to track, however, especially when playing co-operatively. During those times I’d essentially spam my attack buttons, keep an eye on my spirit/health meters and react accordingly. Wading through dozens of foes is undeniably part of the game’s appeal, but there at times when it crosses into “just hope for the best” territory.

There isn’t a ton going on with the audio, which lets the repetitive sounds of combat carry things most of the way. The game’s voice acting is marginal, though if you listen to all the optional conversations it does help round out the story a bit. Much of the game is spent without musical accompaniment, and when the soundtrack does kick in, it’s just standard fare.

Anytime a game starts out with an old man (Deckard Cain) researching ancient prophecies you can safely assume the shit will be hitting the fan in short order. That’s certainly the case in Diablo III as a falling star strikes the cathedral that Cain and his niece Leah are studying in, unleashing all manner of demonic and evil creatures on the world of Sanctuary. From there it’s up to you, as one of the game’s five playable classes, to investigate the happenings and vanquish this evil.

Told over four acts, the game isn’t particularly long in the traditional sense as you’ll wade through thousands of hapless minions, occasionally mowing down beefed up versions of standard foes and sub-bosses before eventually working your way up to battle the main stage bosses. What that general overview doesn’t account for, however, is how damn addicting the game is.

Diablo III was meant to be played over and over again as you continue leveling up your character and searching for epic pieces of loot to transform from would-be hero into an unstoppable ass-kicking machine. As such, “beating” the game barely scratches the surface as there are four progressively harder modes to tackle and a whopping eight difficulty settings — not to mention that the truly masochistic can play in hardcore mode in which characters can’t be resurrected.

As noted, there are five character classes to choose from. Two are melee based — Barbarian and Monk — and three are ranged or magic based — Witch Doctor, Wizard and Demon Hunter. Each class has specific requirements, and they all feel different enough that leveling up multiple characters has legitimate appeal. Although I typically skew toward ranged combat, I found melee battles a little more precise in the controls department and gravitated toward them instead.

And then there’s the loot. Diablo III has a great mix of common and rare weapon/armour drops; when it feels exciting when you see that orangey beam of light emanating from an item, and yet when it’s not really what you’re looking for it’s not all that disheartening, either, because you know it’s just a matter of time before another one drops. Unlike with many other games built around acquiring progressively better equipment, I never felt like my character was falling behind thanks to not finding new gear.

Of course, not everyone is going to enjoy the micro management that comes with frequently grabbing better stuff, and the game’s outdated interface doesn’t help matters much. The radial menu and old-looking fonts gives that aspect a bargain feel, and there’s no getting around the fact that you need to be willing to spend a decent amount of time comparing weapons and pieces of armour. And the higher you go, the more difficult it becomes to quickly distinguish which items are superior.

There’s also no avoiding a simple truth: you will be doing the same things over and over again in Diablo III, and you’re either on board with that or you aren’t. I’ve long been wired to enjoy that style of grinding in which the satisfaction of leveling up and finding an elusive piece of weaponry is more than enough of a carrot to keep mashing buttons into the wee hours of the morning. If that’s not your style, no amount of beefed up enemy hordes or high-level equipment will likely maintain your interest.

Multiplayer is also a huge part of the game. In fact, with A.I. followers, you could make the case you’re rarely alone even when playing solo. Setting that aside, teaming with actual humans is silky smooth in Diablo III, whether you’re playing couch co-op or jumping online for four-player mayhem. I never had any difficulty locating a game, the connection was consistently strong and the ability to drop in or out of a game at will worked without a hitch.

There were plenty of moments during my time with Diablo III when I’d bemoan some aspect of the game… and then proceed to play several more hours. For whatever shortcomings it has, Diablo III is simply a blast to play, and if you’re into action RPGs I can’t recommend it enough.

By HC Green
Tags: Diablo III
This entry was posted on Sunday, September 15th, 2013 at 4:59 pm and is filed under Herija Green, Video Game Reviews. You can follow any responses to this entry through the RSS 2.0 feed. You can skip to the end and leave a response. Pinging is currently not allowed.