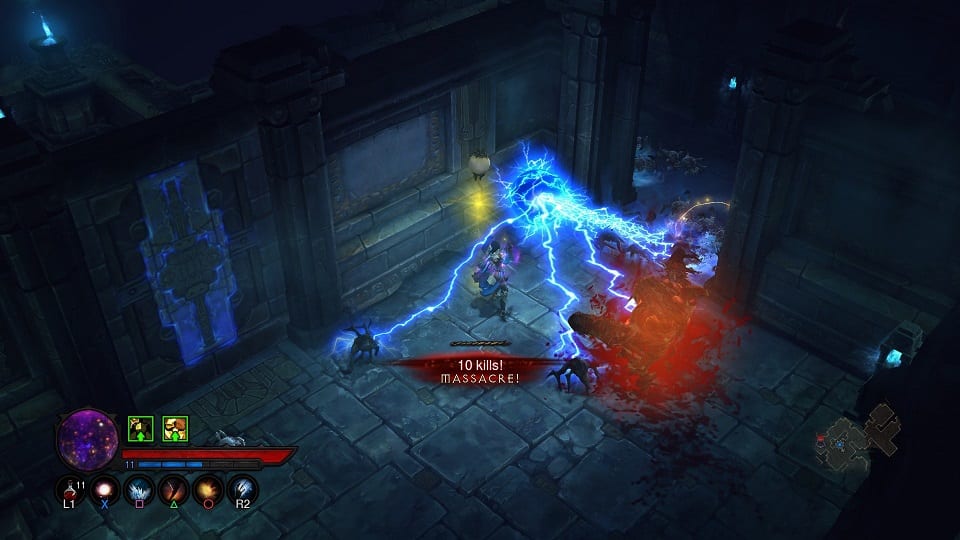 Were we to start listing the number of Xbox 360 and PlayStation 3 titles that have been upgraded with better graphics or repackaged with additional DLC for the Xbox One and PlayStation 4, we’d be here for a while. Don’t make the mistake of lumping Blizzard’s Diablo III: Ultimate Evil Edition into that group, however, as this version is truly worthy of its own release.

Rather than rehash what we wrote in our original review (that can be seen here), let us instead simply reassure you that the move to next gen is just as smooth as the transition from PC to consoles. In fact, chaining moves together feels slicker than ever.

If you played Diablo III for the first time on 360 or PS3, you’ll immediately notice how much better things look on the new consoles. It’s a clear sign of just how much was sacrificed to get the game to run at a respectable frame rate on the last generation. Colours are sharper, everything is more detailed and the various combat effects look grander — all of which is done in 1080p and at 60 frames per second. It’s still not a visual powerhouse, but it’s leaps and bounds above what we saw last year.

As far as we can tell, nothing has been done with the game’s audio. Voice acting is still decent, and the sound effects still get repetitive over longer sessions. Nothing special here.

There’s an absurd amount of content in Diablo III: Ultimate Evil Edition, starting with the four acts found in the original along with an all-new fifth act from the Reaper of Souls expansion. Set after the events of the main game, Act V sees Malthael steal the Black Soulstone for the purpose of wiping out humanity. So once again it’s up to you, the Nephalem, to thwart the former Archangel of Wisdom’s plan.

While story was never the game’s selling point, Reaper of Souls adds a lot of things that fans will enjoy, such as new locations, tougher enemies and more loot. It’s a lengthy expansion, too, and it certainly felt like the longest of the five acts. One of the original story’s loose ends is even tied up, which made for a satisfying moment of retribution.

Beyond even the additional act, what truly gives the expansion its longevity is the introduction of Adventure Mode. Here you’re free to travel throughout the fully unlocked world of Sanctuary, moving between waypoints, collecting bounties and  braving Nephalem rifts. It’s completely randomized with loads of different objectives, such as killing a specific enemy or clearing an area of all foes.

And then there’s the loot. Rare and legendary drops are more prevalent here, and they’re also targeted toward your character. That means whatever class you’re playing as will find items slanted toward the attributes they value. It really helps build up your character the way you want since you’re provided so much unique loot — and it also helps make you feel like you’re constantly making tangible progress even during shorter runs.

In addition to all that, some smaller (but still appreciated) tweaks have been made. The level cap has been raised from 60 to 70, and that includes a fourth passive slot to be used once you reach the highest level. A “mystic” has been added, joining the blacksmith and jeweler, and she has the ability to change one property on an item, which can be quite valuable. She can also change the outward appearance of any item. Although purely cosmetic, it’s still a nice option.

For anyone dreading starting over on a new system, Ultimate Evil Edition allows you to import your old character from the previous console. It was fast and easy to move our character from the 360 to the Xbox One, and we’d imagine the process is similarly painless on the PlayStation side.

It’s somewhat surprising just how much better Diablo III: Ultimate Evil Edition is than its last-gen predecessor. With improved graphics, loads of added content and numerous tweaks that have rolled out in patches since the PC launch, this is a must own for action-RPG buffs.

How it works is that all Primary attacks not only deal damage but also serve to fill up your spirit meter, which in turn is used to unleash abilities from the other five aforementioned categories — equipped items also assist in regenerating your spirit meter. What this system does is create a certain rhythm to the combat in which you pepper foes with weaker strikes to build up more powerful attacks and buffs.