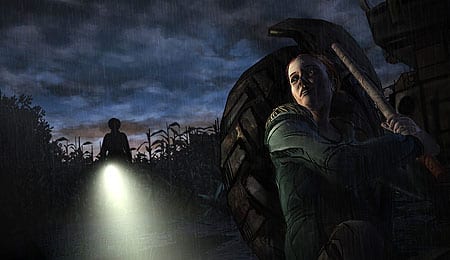 Unlike the original episodic The Walking Dead game, 400 Days has nothing to do with Lee, Clementine, Kenny, or any of the other various characters except for one blink-and-you’ll-miss-it reference (hint: it involves the missing boat). Instead, 400 Days focuses on five different characters, each one getting about 30 minutes or so of gameplay:

There’s also a final segment that ties everything together, and you have to think that this is leading to Season 2 of The Walking Dead.

You can select which character’s story you want to dive into first. The order isn’t explicitly shown on the selection screen (though really, you could just go left to right), but playing out of order creates a unique Pulp Fiction-esque experience. Regardless of the order you play, various plot threads move along from chapter to chapter, and you’ll get a sense of the bigger picture when you get to the final segment.

Gameplay largely remains the same: the story is driven by dialog choices, some of which have severe consequences regarding circumstances. It’s possible to replay 400 Days in very different ways, and while the end results may be similar, the path there can vary greatly and that’s a big part of the fun. Different elements of the original game are still here, such as making quick life-or-death choices or deciding between two no-win scenarios. The dialogue, character development, and scenarios are all simultaneously brutal and sympathetic, and my only gripe with the writing is that occasional extreme use of profanity shows a tiny bit of creative laziness.

In fact, the only real issue here is that each of these characters only gets a snippet, so while you may empathize with them, there’s not enough content to truly get to know them. It remains to be seen how big or small a role they’ll play in Season 2, but after getting through 400 Days, there’s no doubt you’ll want to know what happens to these flawed people.

There’s no Clementine to protect, but The Walking Dead: 400 Days captures everything that worked so beautifully in Telltale’s episodic post-apocalyptic adventure game.

By Mike Chen
This entry was posted on Saturday, July 13th, 2013 at 1:06 pm and is filed under Mike Chen, Video Game Reviews. You can follow any responses to this entry through the RSS 2.0 feed. You can skip to the end and leave a response. Pinging is currently not allowed.