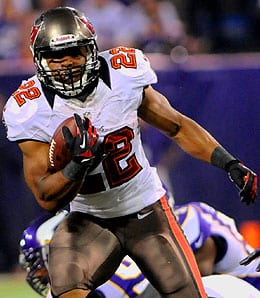 As a rookie, Doug Martin was fifth in the league in rushing.

The 2013 RotoRob NFL Draft Kit continues today with the release of another cheat sheet. So while wonder what will happen to Aaron Hernandez now that he’s in police custody, let’s examine the top 50 running backs in Fantasy football for 2013.

In a world where NFL running backs have a tiny window of effectiveness, Adrian Peterson stands mighty. Please remember a 2,000-yard season post major knee surgery is not normal — clearly, AP is a supernatural being. The true reality is most NFL running backs get 2-to-3 years of Fantasy limelight and every year new ones emerge while others fade into third down oblivion. If your league rewards a point per reception (PPR) it opens your options up a bit. Guys like Darren Sproles and Jacquizz Rodgers can be aces in the hole.

It’s always recommended that once you draft a top RB, you should plan on taking his backup later on. This can be a safe practice but you should definitely look into your draftee’s injury history and recovery time before you fixate on their understudy. For instance, Darren McFadden is a modern day Fred Taylor. He is a great back but he is eggshell fragile. If you take McFadden have a concrete backup plan.

1. Adrian Peterson, Minnesota Vikings: Peterson is old and injury prone, but is worth the risk. He is the Vikes’ offense — everyone else is a branch to his tree trunk. AP is also great pass catcher, which means Minnesota has options to exploit the opposing defenders weakness. He should be the consensus number one Fantasy player in your league. If not, your league is not worth playing in. Let’s face it: Purple Jesus is a human highlight film, as you can see in this video…

2. Ray Rice, Baltimore Ravens: Rice has been projected to slow down over the last couple seasons, but, he is just plain furious and fearless and will take the ball anywhere he pleases. He has worked on his receiving game and with Anquan Boldin gone, Rice might be asked to make some catches over the middle. Some will doubt Rice being ranked this high but there are far more reasons for the next few to be rated lower. The only RB with more receptions than Rice last season was Sproles.

3. Arian Foster, Houston Texans: When Houston drafted WR DeAndre Hopkins, it made this offense more versatile and dangerous. At its heart is the elusive Foster. A healthy Matt Schaub helps greatly, but the durable Foster will carry the load nonetheless. Foster can catch and make the first guy(s) miss and he stays on the field for third and short.

4. Doug Martin, Tampa Bay Buccaneers: Martin burst onto the scene and through front sevens as rookie. He appears to be the second coming of Maurice Jones-Drew in terms of stature and fearlessness. Tampa shipped former starter LeGarrette Blount to New England during the draft so the door is open for Martin to have another 1,400-yard season. Martin also came close to 500 yards receiving.

5. LeSean McCoy, Philadelphia Eagles: The Eagles are still restrained by Michael Vick, but their offense still offers flashes of excitement. McCoy is still the feature back and he is awfully good. No matter who quarterbacks Chip Kelly’s offense, McCoy will get his touches. McCoy is a little older now, but in NFL years, he’s wiser. His hands will always be needed on third and long.

6. Jamaal Charles, Kansas City Chiefs: The vibe in KC is gaining steam and its division opponents need to be ready. Charles is a beast who has overcome a major injury to star again. New faces in head coach Andy Reid and QB Alex Smith are nothing but good news for Charles and his value. Reid knows how to play to his strengths, so Charles can and will be the focal point.

7. C.J. Spiller, Buffalo Bills: Spiller is a sexy pick this season and rightfully so. He finally proved that he can be an every down back last season. Spiller has the ability, but whether or not his body can handle it remains to be seen. Talent is oozing… or should we say spilling from him. The Bills might not be very good, so Spiller will be gets loads of opportunities.

8. Trent Richardson, Cleveland Browns: Quietly, Richardson scored 12 touchdowns and totaled 1,400 yards through the air and on the ground a season ago. He will miss some time this summer with a muscle strain in his leg, but don’t let that discourage you. He’s got youth on his side and Cleveland can only better because Richardson opens its entire offense up.

9. Alfred Morris, Washington Redskins: Lost in the AP 2K chase was Morris propelling his way to 1,600 yards on the ground. However, he did not light anybody up with his receiving ability, hence his relatively modest placement on this list. In the shadows of RG3, Morris sliced into the end zone 13 times as a rookie. You can feel comfortable taking this former sixth round pick in the first round of your Fantasy draft.

10. Marshawn Lynch, Seattle Seahawks: Lynch finally had a season in which his off-field troubles didn’t overshadow his on-field performance. He finished third in rushing yards with 1,590 and tied for fourth in rushing TDs with 11. Lynch is just 27 and he hasn’t played every single down in his seven-year career. All signs point to the Seahawks doing some major damage this season. The addition of Percy Harvin and the fact that Seattle drafted two RBs can only help and motivate Lynch to excel.

11. Matt Forte, Chicago Bears: In the land of Enis, Salaam and Benson fails, Forte has proven to be a Green Wave of fortune. Versatility is Forte’s forte and those who remember watching “Sweetness” play could not ask for more. Because QB Jay Cutler and WR Brandon Marshall fell in love, Forte’s receptions were a career low (44) last season. However, that number still ranked second on the team and the Marc Trestman offense will find ways to get Forte up-field.

12. Frank Gore, San Francisco 49ers: There always seems to be some doubt surrounding Gore. With four other RBs likely to remain with his team it’s easy to doubt him yourself. He has had his share of injuries in his career, but, Gore produces when he plays. Also, don’t forget Colin Kaepernick is a young, mistake-prone QB. The 49ers will give Gore the ball early and often. It will be his job to control the flow between the tackles.

13. Chris Johnson, Tennessee Titans: Johnson is cocky but fast and now he has Shonn Greene riding the pine behind him. Addition depth added through draft and free agency will keep Johnson fresh. It’s worth noting, however, that Greene may steal some red zone/between tackle touches.

14. Stevan Ridley, New England Patriots: Ridley quietly pieced together a 1,000-yard season last year. Now in the wake of the Hernandez Dam breaking the Pats will need a steadfast throttle keeper. Some questionable free agent signings, along with some green rookie WRs and the LeGarrette Blount/Brandon Bolden/Shane Vereen backup trio leaves some questions about Ridley’s role.

15. Darren McFadden, Oakland Raiders: Let’s hope this year McFadden has a strength and conditioning coach. His injuries always seem to awkwardly last too long and the frequency in which they come is definitely more vivid than the “Black Hole.” McFadden is a top back when he is on the field and the possibility of 1,500 yards rushing and 500 yards through the air is what Raider Nation hoped for when he was drafted. If he stays in one piece, trade high on him or ride him to the playoffs.

16. Reggie Bush, Detroit Lions: Megatron has a new GoBot and his name is Reggie Bush. A healthy Bush moves the chains through the air and on the ground.

17. Maurice Jones-Drew, Jacksonville Jaguars: The Jags are Raider awful, but MJD can still be a Fantasy factor. Sitting the start of the 2012 season cost his stock dearly. Now that he’s slated for a full season MJD shall rumble again.

18. Steven Jackson, Atlanta Falcons: If Mr. Jackson can continue to pass the Quizz, his stock will grow.

19. DeMarco Murray, Dallas Cowboys: A healthy Murray should please Tony Romo and then limits could be shattered.

20. Ryan Matthews, San Diego Chargers: Matthews is finally ready to prove he is an elite back.

22. Eddie Lacy, Green Bay Packers: This rook is no pawn and he will be crowned King of Green Bay.

23. Ahmad Bradshaw, Indianapolis Colts: New team? No problem! He’s got Andrew Luck and a slew of WRs to open the field up for him.

25. David Wilson, New York Giants: As long as he doesn’t fumble he will be a nice commodity for Eli Manning.

27. Lamar Miller, Miami Dolphins: The job is Miller’s to lose. He will need to prove he can block and make plays through the air.

28. Montee Ball, Denver Broncos: The RB position has been a wild carousel for Denver lately. Ball is poised to nail down the starting job for the long haul. He has good size and strength.

29. Le’Veon Bell, Pittsburgh Steelers: Bell seems to be risky pick. He is big for an NFL RB and has experienced vets behind him, but none of them ever showed the promise that Bell is exuding.

30. Jacquizz Rodgers, Atlanta Falcons: Rodgers will get his touches. Don’t worry if he is your second RB drafted.

31. Chris Ivory, New York Jets: Ivory will finally get a chance to carry the load. Too bad it’s for the Jets. Draft at your own risk.

32. Jonathan Stewart, Carolina Panthers: Who knows what this year’s Panthers running attack will look like. Stewart can be the man, but then again so can DeAngelo Williams.

33. Rashard Mendenhall, Arizona Cardinals: If Mendenhall can avoid injuries, he has the tools to be great.

34. DeAngelo Williams, Carolina Panthers: See Stewart’s writeup at No. 32 and you see the dilemma here.

35. Mark Ingram, New Orleans Saints: Ingram can be a pacesetter and Drew Brees will exhaust all his weapons.

36. Giovani Bernard, Cincinnati Bengals: Bernard off tackle is the play linebackers shall fear.

37. Andre Brown, New York Giants: When the blood starts to drip in the NFC East, a haze of Brown will overcome.

38. Mikel Leshoure, Detroit Lions: Leshoure will be stealing TDs from Bush in the same way Brandon Jacobs did to Tiki Barber.

39. Fred Jackson, Buffalo Bills: Jackson may be be Tonto at the start of season, but Spiller could crumble.

41. Pierre Thomas, New Orleans Saints: Thomas can emerge from the swirl of bullets that Brees is always firing.

42. Shane Vereen, New England Patriots: The Pats offense will need all hands on deck since their tight end situation is so uncertain.

43. Johnathan Franklin, Green Bay Packers: Franklin and fellow rook Lacy will lean on and encourage each other. Franklin is the lightning and Lacy is the thunder.

44. Michael Bush, Chicago Bears: Bush can be burdened with anything.

45. Danny Woodhead, San Diego Chargers: Remember what Sproles did as Charger? Woodhead can be that X factor.

46. Daniel Thomas, Miami Dolphins: If Miller falters or fumbles, Thomas could be a waiver wire gem.

47. Marcel Reece, Oakland Raiders: Not if but when McFadden gets hurt, the waiver wire will be clicking Reece.

48. Joseph Randle, Dallas Cowboys: If Murray gets bruised, you can’t lose with Randle. Unless you are in a league with a bunch of Cowboys fans, Randle will be there in the final rounds.

49. Bryce Brown, Philadelphia Eagles: Brown proved to be a capable fill-in last season. That will garner him some late round attention.

50. Bernard Pierce, Baltimore Ravens: Who is this guy? Well, all he did was gain 500 yards last season while backing up Rice.

By Josh Johnson
This entry was posted on Wednesday, June 26th, 2013 at 11:38 am and is filed under 2013 RotoRob NFL Draft Kit, Cheat sheets, FOOTBALL, Josh Johnson. You can follow any responses to this entry through the RSS 2.0 feed. Both comments and pings are currently closed.