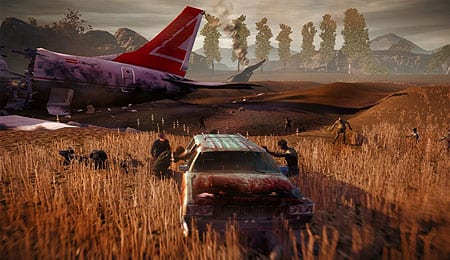 As I’m sure I’ve written before, the undead craze just hasn’t clicked with me. I don’t watch The Walking Dead (though I did enjoy Telltale’s version), hardly played the Left 4 Dead series, ignored Dead Island, etc. So when I say that Undead Labs’ new downloadable title, State of Decay, is highly compelling you can be assured it has earned that designation.

Part brawler, part shooter and part resource management sim, State of Decay does a good job of placing all the necessary controls at your fingertips. Melee combat consists primarily of bashing zombies until they fall or are temporarily incapacitated, at which point you can finish them off. Most face buttons serve multiple functions — for example, tapping “B” dodges an attack while holding it down crouches for stealth — but rarely did I have any trouble doing what I intended. A stamina meter drains whenever you’re exerting your character (sprinting, climbing, attacking), which creates added vulnerability.

While melee combat is tight and simplistic, shooting lacks precision. Holding down the left trigger draws your gun and provides an over-the-shoulder view with a reticule to aim. It’s a traditional setup, however — in what was likely a decision to simulate inexperienced firearm users — it’s not easy to dispatch groups of zombies with bullets. Combine that with the tendency for gunfire to attract more enemies and I found myself using guns about once for every 25 melee encounters.

Driving is a big part of the game as well, and it employs a nice, basic approach that any Grand Theft Auto aficionado should approve of. Plowing through a herd of zombies is a good way to blow off steam, and the ability to open your car door to smack stragglers is awesome. Using the d-pad to manage inventory and resources is competent.

One thing I did take umbrage with was the need to fumble through your backpack in real time. When you’re searching a house or preparing to undertake a mission it’s a non-issue, but weapons degrade and break in State of Decay, and the built-in warning system is a little too ambiguous — a yellow icon appears when the weapon is damaged, but you receive no further feedback until it breaks. If that happens in the heat of battle it can make for a very bad day for your survivor.

Given the size of the sandbox here coupled with Xbox Live Arcade’s two GB limitation it’s actually quite impressive what Undead Labs has been able to pull off. The world offers a nice mixture of towns and wilderness, and the muted tones typically associated with these kinds of games are paired with fall colours in the trees. Houses and businesses don’t feel like clones of each other, and there’s a respectable amount of diversity within even the basic zombies.

Blood and gore are effectively deployed without being completely overdone, and the finality of one of your survivors’ demise makes those death sequences visceral. There are lots of small touches sprinkled throughout the environment as well. They give it a down and dirty, realistic vibe that serves the source material and tone of the game exceedingly well.

From a technical standpoint, however, State of Decay has plenty of issues. Textures load slowly, creating rampant pop in, and enemies routinely clip through walls — a phenomenon that erodes some of the tension since you can frequently see them before they can harm you. At times weapons don’t load, leaving you to swing imaginary nightsticks and axes at the undead. Future patches may address some of these things, but for now it’s simply the cost of doing business.

Voice acting is mostly solid, at least with the actual story-advancing dialogue. The in-game banter with the radio operator and survivors is incredibly repetitive, though, and it never changes no matter who you’re controlling at the time. Plus, the voices are recycled so that multiple characters sound exactly the same. A decent soundtrack is backed up by a lot of creepy moans and screams from the undead… some of the bigger ones will definitely heighten your awareness.

Things begin with you in control of Marcus, who has just returned from a vacation into a wooded area untouched by modern technology, so he is therefore blissfully unaware that, courtesy of the undead, society has gone to hell in his absence. Unlike most games, however, State of Decay doesn’t have a main character. Instead, the focus is on communal survival as you’ll switch between people throughout, leveling up their various skills in RPG-inspired fashion. It’s an interesting approach, and one that underscores one essential truth — anyone can die at any time… and unlike the zombies, they stay dead.

State of Decay is an open-world, sandbox title, and it follows the general conventions of the genre with mission indicators popping up on the map for you to activate when ready. Secondary quests — such as helping a fellow survivor or hunting down a particularly nasty Zed (slang for zombies) — will eventually expire at a cost to things like overall morale or individual relationships within the group, but the main ones will stay active with occasional radio reminders that they’re still available.

As a story there isn’t a lot going on here, and despite some early indications that a shadowy conspiracy involving the government may be involved it never really amounts to much. Instead, the game focuses on creating desperation in the quest to stay alive another day. Needed resources like food, medicine and ammunition are in short supply, and acquiring them means venturing out (usually alone) to scrounge through zombie-infested streets. And naturally, the more people you have in your compound the more reserves you’ll need to keep on hand.

There’s a lot to keep track of, and the game rarely lets you take a breath. There’s always something that requires the group’s attention, whether it be zombie hordes or infestations, food going bad or materials needed to complete construction on a new area of the camp. It can feel a bit overwhelming at times, but that’s by design. Undead Labs wanted you to be under constant pressure, and on that front it succeeded.

As noted, you start by controlling Marcus, but as you meet new people you form relationships, and once those reach “friendship” status you can take direct control of them. This is necessary because characters get tired as they undertake missions, dropping their stamina and making them more vulnerable. Each time you take direct control you earn experience points, which are distributed to the appropriate area — bashing skulls improves your fighting, sprinting boosts cardio and so on. Advance a skill far enough and you’ll be able to choose specializations. It’s a familiar and effective system.

Since money would have no meaning in a zombie-filled society, State of Decay replaces traditional currency with “influence.” As the name implies, influence represents the amount of sway you hold to make decisions for the group, so everything you do (good and bad) affects that. All the weapons and items you salvage add to your total, and when you take things from the combined locker it subtracts… as you’re using your influence to take two guns or extra medicine or whatever. Completing missions and claiming bulk resources also boost your influence, which proves to be a very creative way to give more weight to your contributions to the collective.

For all the good things that State of Decay pulls off, however, there are a number of items that keep it from attaining the heights it could have. Beyond the lukewarm story and rampant technical issues, which I’ve already touched on, the game suffers from plenty of uneven moments. I lost my first two characters under circumstances directly caused by teammate A.I. that stood literally two feet away from me and rendered no help as I was ripped to pieces.

Those same teammates get themselves into trouble far too often as well, which, when combined with the near constant warnings (and accompanying morale penalties) for zombie infestations that are nowhere near your camp, can make playing feel like a grind — it should be noted that the infestation issue is set to be corrected as part of the first patch. The game is persistently on, too, meaning if you shut down you’ll be returning to a world where much of your hard-earned influence, resources and goodwill have been used in your absence.

Perhaps most annoying, though, is the inability to direct individuals you’re not controlling. It really bothered me when I switched away from my primary character because they were tired, and then 20 minutes later they’re listed as “missing.” Wait, what? Why is the game sending a fatigued character into the world without my consent?

I felt the same way about my inability to bring other survivors along on scavenging runs to serve as backup and/or pack mules. Yes, you can radio for runners to come pick things up once you’ve found them, but it still makes resource gathering incredibly time consuming when you can only carry one rucksack at a time. The ability to delegate to NPCs — sending combat-ready ones to bail out trapped survivors, or bringing along strong ones to carry items, etc. — would’ve been a great feature, but at this point I’d settle for not having my best people arbitrarily lost.

I like State of Decay. A lot. It’s just so tantalizingly close to being brilliant, however, that its few non-technical shortcomings are magnified. Still, State of Decay does so much right that it is more than worth the 1,600-point buy in. Just watch out for those pesky infestations.

By Herija Green
This entry was posted on Monday, June 10th, 2013 at 1:17 pm and is filed under Herija Green, Video Game Reviews. You can follow any responses to this entry through the RSS 2.0 feed. Both comments and pings are currently closed.