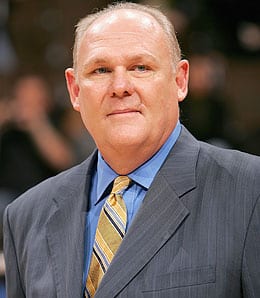 After a quarter century, George Karl finally got his due.

George Karl just wrapped up his 25th season as a head coach in the NBA and now he can finally say he’s been Coach of the Year.

It’s the longest any coach has gone before winning the award in NBA history.

Karl had to guide the Denver Nuggets to a team-record 57 wins — without a big name star — to finally earn the recognition he’s been due for so long.

The previous longest an NBA coach had served before busting his Coach of the Year Award cherry was 21 seasons (Lenny Wilkins).

Does that speak volumes about Karl’s mediocrity — being just good enough to stick around that long, but never good enough to coach a great team? Or perhaps it suggests that he’s always been a very good coach, but as expectations kept growing, he had to take it to an unachievable level to win some hardware. Or maybe it just means that awards are generally dumb-ass popularity contests.

At any rate, it’s freaking well past high time that Karl earned his due.

Miami’s Erik Spoelstra was the runner up, followed by the Knicks’ Mike Woodson and Gregg Popovich of San Antonio, last season’s winner.

Karl led Denver to the fourth-best record in the Association, earning the No. 3 seed in the Western Conference. The fact that the Nuggets were upset by the Golden State Warriors casts a pall over all the team accomplished this season, but at least this award offers some consolation for Karl.

The fact that Denver was knocked out early really stings considering how hot the team was heading into the playoffs. The Nuggets went 24-4 after the break, which included a team-record 15 straight wins. They also set a franchise record by going 38-3 at home, which made that pivotal loss to the Warriors in Game Two at the Pepsi Center all the more crushing.

The key to Denver’s success this season was a high tempo offense that paced the association with 106.1 points per game, led by Ty Lawson (16.7 PPG, but only 31st in the NBA). But as mentioned, the Nuggets didn’t really have a go-to star, instead relying on a fairly deep rotation that featured nine players averaging at least 18 MPG. Nine different players averaged at least eight points per game.

In assessing the first round upset, the two biggest factors were Stephen Curry’s brilliant play for Golden State and the absence of Danilo Gallinari (Denver’s second leading scorer), who was out with a torn ACL.

So while Denver’s regular season was historic, a fourth straight first-round playoff exit pretty much ruined all the good vibes.

Meanwhile, this honour is just the cherry on top of what assuredly has been a Hall of Fame career for Karl. His career record is now 1,131-756 with five different teams. He’s gone 21 straight seasons without a losing record, tied with Phil Jackson for the longest such streak in association history.

What do you think? Did Karl deserve to win this award? Let us know your thoughts in the comments section below…

By RotoRob
This entry was posted on Wednesday, May 8th, 2013 at 2:43 pm and is filed under Awards, BASKETBALL, RotoRob. You can follow any responses to this entry through the RSS 2.0 feed. Both comments and pings are currently closed.