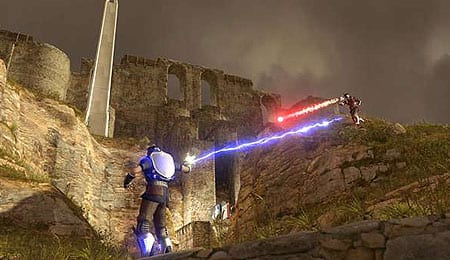 I have the high ground Anakin!

ShootMania Storm is one of those ideas you just want to see succeed. Taking TrackMania’s map editor and applying it to a first-person shooter has the potential to be a game that will attract both a dedicated fan base and provide longevity to said fans. Whether these both deserve to happen, however, is dependent on whether the core gameplay is fun enough to warrant it. To which we can say, it absolutely is.

ShootMania’s controls are almost absurdly simple, especially by first-person shooter standards. It uses the standard movement and aiming configuration found everywhere else in the genre, but outside of the movement keys, the game can be played entirely with the mouse. Clicking the left mouse button shoots while the right is used for jumping and sprinting.

While this simplicity is a nice change of pace, it could be argued that it is too simple as every time we wanted to sprint we would need to jump first. The movement itself, however, is fast enough that we didn’t feel the need to sprint too often.

The biggest strength, graphically, with ShootMania is the contrast between its environments and character models. The areas of the game offer standard locations similar to what is found in Halo while the characters have a retro, neon look to them as though they came straight out of Tron. The game blends these two together very well and they fit nicely with the gameplay to send the message that, while this is a modern first-person shooter, it plays like something from the past. The music and sound effects also complement the retro style effectively.

Rather than deliver something similar to what other shooters offer, ShootMania has its own distinct feel. It is a much faster game than most of the shooters on the market, yet the lasers fire at very slow rates — about the same speed as Metroid Prime. This, combined with the slow pace of the recharge bar for your weapon, gives an interesting take on shooters in which dodging fire is central to succeeding, and it is based more around predicting where your enemy will be rather than firing at where they are now. If you hate campers, this is the shooter for you as standing still is basically suicide.

Matches fit this well as they go by very quickly. The player can only take 1-to-3 hits (usually two) based on what game type is played. Points are set up based on the number of times the player hits an enemy rather than number of kills, which gave more of a hit-and-run type of gameplay. There is also a tornado in the main match type that slowly closes in until only a small centre section of the area remains, further emphasizing quick matches.

The two areas in which the game stumbles are in its server stability and community size. There were too many games in which movement was so laggy that it was downright unplayable. This would fluctuate, as some nights we had no issues at all while others we were lucky to get a single match in. Hopefully the developers will create a patch to help this.

Meanwhile, the community size was also too small, so we were not always able to play the game we wanted because there were not enough players. This could be fixed over time as well, but as of now the game can be a ghost town at certain times.

A few technical issues aside, ShootMania Storm’s mechanics definitely deserve a future that takes advantage of its map editor. The issues with the game itself can easily be fixed as well, either through a patch or a stronger community. Hopefully it can achieve this because it is one of the most enjoyable shooters we have played in a while.

By Casey Curran
This entry was posted on Thursday, May 2nd, 2013 at 12:56 pm and is filed under Casey Curran, Video Game Reviews. You can follow any responses to this entry through the RSS 2.0 feed. You can skip to the end and leave a response. Pinging is currently not allowed.