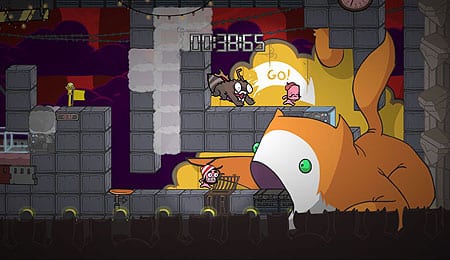 The gentleman in the beret mustache you a question.

Back when wrestling was at its zenith, The Rock used to invite his hapless opponents to visit the corner of Know Your Role Boulevard and Jabroni Drive at which point they would proceed to check themselves directly into the SmackDown Hotel. I bring this up because The Behemoth, best known for developing the amazing Castle Crashers, has its own imaginary location that needs exploring. Centrally located on Hatty Hattington Way, just south of Bitey Cat Place, sits the diabolical BattleBlock Theater. So why don’t you stay a while, if you dare… MUAHAHAHAHA!!!

As an (eventually) demanding platformer, BattleBlock Theater needs a top-rate setup to execute many of the precise leaps and controlled falls required to successfully complete the levels. For the most part the controls meet the challenge as you’ll pull off death-defying double jumps, slide under saw blades and launch fireballs into bad kitties that are just waiting to take you out.

Where the game stumbles is with the decidedly awkward melee segments — very strange given the team’s impeccable pedigree with Castle Crashers. There were literally dozens of times when it seemed like I should be going all Mike Tyson on some offending feline only to end up being the punchee instead of the puncher. It’s an issue that follows the game into the competitive multiplayer as well, resulting in more than a few exasperated expressions.

Despite this being just its third game, The Behemoth already possesses a very distinct (and instantly recognizable) art style, which is on full display here. Characters and levels are simplistic yet teeming with personality and a cheerful colour palette. There’s also plenty of the developer’s signature charm with square pigs to ride and frogs turned time bombs… oh, and poop, too. The story advancing cut scenes are very clever as well, offering up a cool take on the game’s theatrical premise.

It’s a little more uneven on the audio side, and your enjoyment of key elements of the game may come down to whether or not you embrace the frenzied outpourings of the in-game narrator. I vacillated a few times before coming down pro-narrator, at least during the cut scenes that are voiced over at roughly 20 words per second — during the levels his quips can become annoying. The music is good, but I found I grew tired of it over extended play to the point of muting on more than one occasion.

Told through a series of patently absurd narrations, the story of BattleBlock Theater is that you and all the other Xbox Live Arcade players were aboard a ship (a “friend ship” no less) that got caught up in a massive storm and deposited on an island. Once there, everyone’s amigo Hatty Hattington is captured by a collection of conniving cats, and now you’re forced to complete increasingly difficult challenges — all for the felines’ amusement.

Clearly, the story is played for laughs, but the actual level design and challenge are serious business as BattleBlock Theater offers up an emasculating mix of puzzles and skill-based jumps. Each of the game’s eight chapters contains nine mandatory stages that must be completed before you can attempt a timed “boss” run that really puts your skills to the test. There’s three additional encore levels per chapter as well, bringing the total number of stages available to an imposing 104.

Each stage can be completed alone or with a partner via local co-op or Xbox Live, though the design differences are minimal. Collectables tend to be in the same spots with changes generally coming in the form of greater distances to jump or tandem crossings where one player needs to stand on a button to activate a bridge while the other moves forward. Early on the game is accessible to nearly any skill level, though as you progress it becomes exclusively the realm of the skilled.

Although stages require you to collect just three gems to open the exit and complete them, nearly all of them have an additional four gems lurking around along with a ball of yarn. As you’d expect, many of these optional collectables necessitate harder jumps or additional backtracking to snap up. The reward for doing so is twofold: (a) your score is based on time and number of gems/yarn collected on each stage; and (b) those items function as in-game currency with gems being used to “free” prisoners (you’re actually just unlocking additional heads for use) and yarn to purchase weapons.

Where BattleBlock Theater is at its best is in its ability to constantly reshuffle the deck, utilizing the same game mechanics — disappearing/reappearing blocks, spike traps, cannons, water hazards, etc. — over and over again in different ways. As it does this the ante keeps getting upped on the difficulty. It’s a tried and true formula for video games in general, and platformers in particular, but that doesn’t mean it should be overlooked for how deftly it’s handled here.

For all that praise, there are some legitimate drawbacks. As previously noted, the melee combat feels really imprecise both in execution and outcome, effectively devolving any hand-to-hand fights with A.I. kitties or other players into button mashing. The game’s difficulty also made it so that extended play sessions became more chore than fun, to the point that completing levels just made me thankful they were over. As such, I’d definitely recommend playing in shorter bursts — every time I’d quit and come back I’d enjoy it a lot more upon returning.

In addition to the single-player action, BattleBlock Theater also includes a suite of multiplayer modes under the Arena setting along with a level editor for anyone yearning to scratch that creative itch. Those that prefer to enjoy the fruits of other people’s labour (like me) can download and play user-created levels — the best of which are to be featured by the developer.

Despite offering up seven competitive modes, multiplayer didn’t really click with me. This mostly because of their universal dependence on the iffy melee controls as regardless of which mode you’re playing you’re going to be tasked with smacking around your opponents. It’s worth checking out, and there’s certainly plenty of time to make some tweaks, but for now I’m not sold on its longevity. On the plus side, I experienced little trouble joining matches and found the performance to be good.

Packed with humour, content and intelligent level design, BattleBlock Theater is an excellent value that should keep gamers entertained for hours on end.

By Herija Green
Tags: The Rock
This entry was posted on Wednesday, April 10th, 2013 at 1:13 pm and is filed under Herija Green, Video Game Reviews. You can follow any responses to this entry through the RSS 2.0 feed. You can skip to the end and leave a response. Pinging is currently not allowed.