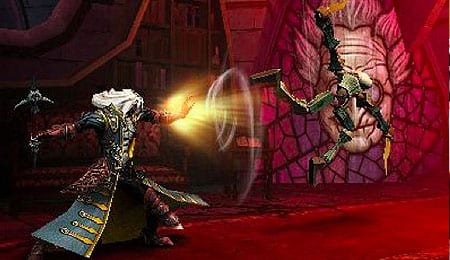 It’s not quite Metroidvania, but it lets you play as Simon, Trevor and Alucard.

Ever since the Gameboy Advance was released, Castlevania has become a series that excelled in familiar territory on handhelds while trying risky new ideas with mixed results on consoles. Mirror of Fate strangely falls into both categories as it takes elements from what was introduced in the original Castlevania, Symphony of the Night and the first Lords of Shadow into something that feels different from all three games. While not a perfect blending, the game does combine these elements to make a very fun side scroller.

The best way to describe the game’s controls would be a 2D God of War. Whip attacks are very similar to Kratos’ chains with the “Y” and “X” buttons used for horizontally- and vertically-focused attacks, respectively. I was disappointed that the game wouldn’t allow me to control the character with the d-pad, however, as that was used to switch between special attacks such as throwing axes and freezing time.

The controls work perfectly except for two minor nitpicks. Catching the enemy off guard to counterattack requires you to press the block button at the same time the enemy makes contact. This worked most of the time, but almost exclusively during boss fights the animation would take too long for it to be pulled off. Alternating between special attacks was done using the d-pad or touch screen, and neither was accessible enough in the midst of combat.

This is one of the best looking 3DS games out there. While Mirror of Fate utilizes a lot of browns and dark colours, they all are used to give the game a very gothic feel that the series is known for. These combined with the typically excellent Castlevania music and sound effects created an excellent sense of atmosphere that fans will enjoy. While I normally ignore the 3D aspect of the 3DS as well, I want to bring up how excellent the game’s use of it is. It was used to make objects in the background really pop out, to the point where I played most of the game with the effects on.

The one area that brings the game’s score down, however, is the cut scenes. These shift the graphic style to a more colourful and cel-shaded approach, and while this actually looked better in my opinion, the changes in style always felt very out of place. What made these worse was the lip synching. They all had the characters only open their mouths without matching their lines, which was very distracting as a middle-of-the-road approach between real cut scenes and still images that did not work in its favour.

As mentioned, Mirror of Fate is a blend of different Castlevania styles. It is split into compact, interconnected areas that hide secrets — these can either be accessed by finding a hidden path or can be unlocked down the road when you obtain a new power or item like SotN. The progression is very similar to older Castlevania titles, as it puts more focus on enemy encounters and platforming than the “Metroidvania” entries. Combat, meanwhile is a 2D take on Lords of Shadow.

This is not a perfect transition of all three, however, as the levels reward exploration a lot less than the Metroidvania games. The secret items came in four varieties: health upgrades, magic upgrades, heart upgrades and background information on the story. These did not appear as frequently as I would have liked and lacked variety. Add in that the upgrades to access new areas were very limited and uncommon, and there was not the same draw to discover every area that Dawn of Sorrow offered.

On the other hand, it takes from the other two games very well. Getting to the next part of the game felt very rewarding and combat was fast paced and fun. Progressing would make new combos and combat moves available, and the game did a good job of making all of these moves useful as very few battles came down to mashing “X” and “Y” over and over. Boss battles were up to the series’ usual standards, as they required patience and dodging until you could score hits on them when they were vulnerable.

Combat was balanced equally along with the occasional puzzle. The platforming offered a healthy amount of challenge while never feeling unfair and the puzzles were surprisingly complex yet never vague.

Castlevania fans will appreciate that after a tutorial as Gabriel Belmont, the game is split into three segments each featuring three fan favourite characters: Simon Belmont, Alucard and Trevor Belmont. Each character controls similarly with their whip attacks, but they offer different powers that require different tactics in combat. This was very distracting with Alucard, however, who should never use a whip (and I say that as a fan of these games). Given how much focus they put into Mirror of Fate’s combat, I can see why they did this, but I wish they had found a way to give Alucard a sword or incorporated a different character.

The game lasts a while, taking me around nine hours to complete. It offers a New Game-Plus mode after completion as well as a higher difficulty, but it still lacked the extras I have come to expect in a Castlevania game — such as a bonus mode offering new characters with their own storyline, which ties into the main one, and this omission was very noticeable. It made the game lose a little of the magic that others in the series usually offer.

Mirror of Fate was not the successor to the Sorrow games that I wanted on the 3DS. Nor was it a game that revolutionized the series like Symphony of the Night. Nonetheless, it is still a solid addition to the 3DS library and one that both fans and those unfamiliar with the series can enjoy.

By Casey Curran
Tags: Gameboy Advance
This entry was posted on Tuesday, March 12th, 2013 at 12:00 pm and is filed under Casey Curran, Video Game Reviews. You can follow any responses to this entry through the RSS 2.0 feed. Both comments and pings are currently closed.