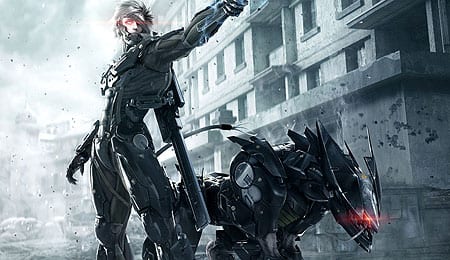 Raiden’s robot dog could kick the crap out of K9 from Doctor Who.

For more than two decades, the name Metal Gear has been synonymous with stealth action. Even the one-off venture into card-based strategy, Metal Gear Acid, revolved around the idea of stealth. For the most part, Metal Gear Rising: Revengeance ditches the concept for a mash-up of, well, a bunch of stuff. Does this first foray into pure action work? In just about all aspects, yes. In many ways, it’s an extension of Metal Gear that’s so beloved by die hards and in other ways, it’s way different and just as bonkers as its title. That formula, however, is actually pretty awesome.

The methodical pacing of Metal Gear Solid — or the stealth genre in general — is often noted as an acquired taste. However, Metal Gear Rising really brings a bunch of different elements together into a single fast-paced experience. What’s in the box? A little bit of:

For the most part, controls are very much like a God Of War or Devil May Cry scheme. You’ve got a light attack, heavy attack, jump, and interact button. One of the right trigger buttons locks on to a specific target (otherwise, the camera is free-roaming and controlled by the right analog) while the other one enters into Ninja Run mode (which is essentially a limited parkour sprint, except it’s much smoother than, say, Assassin’s Creed).

One of the left trigger buttons uses secondary weapons or items such as grenades. The other one enters Blade Mode, which is the primary selling point of this game (outside of the Metal Gear name). Blade Mode slows things down and brings up a cutting reticle, one that you can rotate 360 degrees with the right analog. It’s precise and unique… more importantly, it’s fun. Of course, a fun mechanic is one thing — whether or not it comes together as a complete package is another.

In addition to Blade Mode, Raiden can parry attacks simply by pointing the left analog in the direction of the attack while tapping the light attack button. This will effectively stun most enemies, opening them up to quick strikes which can then lead to Blade Mode awesomeness. You can actually play the entire game without executing a single parry but it adds a lot to both the flow of combat and the visual flair, so it’s a skill worth learning.

Metal Gear Solid 4 is still one of the best-looking PS3 games on the market despite coming out in June 2008. Metal Gear Rising’s graphics are certainly strong, but they’re not quite to the same level as the series’ standard. My guess is this is a function of how fast the animations are, along with the processing power required to slice the bejesus out of everything in real time (more on that later). This is a fair trade-off, since cutting is what distinguishes the action of this game, thus any cutable game models — from people to cars — need to have exterior and interior details.

The Metal Gear series has often been recognized as having some of the strongest voice work in gaming. And while Quinton Flynn has returned to voice Raiden, most of the cast is filled with newcomers of varying quality. There are some odd choices in there, such as the a child who is very obviously voiced by an adult. I couldn’t tell if long-time voice director Kris Zimmerman worked on the project or not (it doesn’t sound like it), but there’s a noticeable drop in performance quality. To be fair, Metal Gear Rising does have a bit of a goofier tone than the traditional grim seriousness of Metal Gear Solid, so perhaps this was done as a conscious choice. (And to be fair, any game that references Vanilla Ice’s “Ninja Rap” should get bonus points.)

The trick to games like God Of War is pacing and fluid action. Metal Gear Rising does succeed at both, and when you really get the hang of it, the pacing is very smart with only a few hiccups. The problem actually comes with Blade Mode — not the actual technical mode, but the impulse to use it everywhere and every time. Yes, it’s really cool to think “Gee, can I cut up that car into hundreds of pieces” and then do it with accurate physics. However, the game is designed so that enemies aren’t necessarily vulnerable to this method of head-on attack. Instead, the game wants you to use button combos to wear down opponents, only to finish them off with Blade Mode.

This little bit of discipline takes a bit of a learning curve, and it may discourage people at first. One of the problems with Blade Mode is that Raiden is static when he does it — you’re not going to get any additional reach, so it’s useless unless you’re right up against someone — and even then, unless an enemy is flashing blue (or a limb is), Blade Mode strikes are seemingly less effective than normal ones.

Once you accept that, Blade Mode is a ridiculous cherry on top of a good melee combat foundation. Energy is restored by getting enemies prone to Blade Mode; once there, slicing through a highlighted area allows Raiden to recover energy from the enemy’s spine (it’s explained) — but also the enemy is chopped up into however many bits you want. It’s accurate and it’s awesome.

Levels are varied and interesting, with some light platforming and stealth thrown in with setpiece battles and standard group encounters. You’ll even make use of the standard Metal Gear cardboard box, except this time the end is much bloodier than when Snake tries to silently take out a guard. Enemy fights are logged in sections, and your success in each section is given a letter grade which then corresponds to Battle Points. After each full level (about 1-to-2 hours each with a full playthrough of about 8-to-12 hours depending on how proficient and completionist you are), you get the opportunity to cash in Battle Points for armour upgrades, new moves, and additional goodies. It’s a minor bit of customization that adds some replay value, though not a heck of a lot.

The only real time Metal Gear Rising falters is when there are too many enemies in a cramped space. Using the lock-on camera causes it to flip around wildly while the action moves too quickly to get an accurate gauge while manually controlling the view. It’s a minor gripe that can be overcome, though you’ll run into a handful of cheap deaths because of it.

Notice I haven’t said a thing about the story. For die-hard Metal Gear fans, don’t worry about spoilers from me. For other folks, know that there’s no need to be steeped in the series’ dense lore. Aficionados will appreciate the new nuggets of information, along with a few twists along the way but it’s not an experience that’s as epic as Guns Of The Patriots or as emotional as Snake Eater.

Despite a few technical flaws, Metal Gear Rising: Revengeance is a unique and incredible experience. At once familiar, new, and WTF nuts, I wouldn’t be surprised if forms of Blade Mode get integrated into future generations of slice-and-dice action games. Just imagine what Kratos could do with that power.

By Mike Chen
This entry was posted on Tuesday, February 19th, 2013 at 11:12 am and is filed under Mike Chen, Video Game Reviews. You can follow any responses to this entry through the RSS 2.0 feed. Both comments and pings are currently closed.