By Angie Picardo and RotoRob

With the hardware already handed out for hockey, baseball and basketball, we turn our attention to the gridiron for the 2012 RotoRob Football Awards.

With the climax of yet another stirring NFL regular season in the books, legions of Fantasy football fans everywhere take a step back and reflect upon their Fantasy fortunes and season suffering regrets. While the right and wrong player can make you curse out loud for different reasons entirely, let’s take a look at some of the standout performers that helped define the 2012 season.

Fantasy Stud of The Year 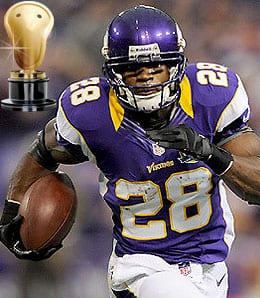 Flash back about a year ago and witness Adrian Peterson, star running back of the Minnesota Vikings, endure a career-threatening knee injury in a late-season game against the Washington Redskins. The subsequent torn ACL and MCL not only put an abrupt end to Peterson’s 2011 but suddenly jeopardized his availability to start 2012 and caused grave concern over whether he would be able to effectively resume his Hall of Fame career. As he reported to training camp, Peterson was a living, breathing question mark as far as Fantasy owners were concerned. Putting all worries to rest, and all critics to sleep, Peterson emerged from surgery better than before, and dominated the league in 2012. Leading the NFL in total rushing yards (2,097), rushing yards per game (131.1), and finishing near the top in touchdowns (12), the 27-year-old terrorized opposing defenses and resumed his post as the premier Fantasy running back. Adding to his already impressive NFL resume of records and achievements, Peterson fell a mere eight yards short of eclipsing Eric Dickerson’s record for most rushing yards in a season. By season’s end, it became abundantly clear that Purple Jesus’ career was not only back on track, it had reached a whole new level of Fantasy excellence. – AP 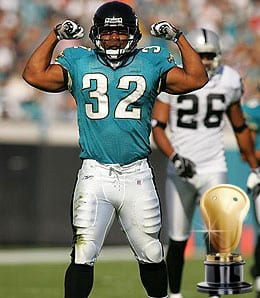 MJD flexed his Fantasy suckitude in 2012.

Maurice Jones-Drew, or as he’s better known, MJD, had Fantasy owners reaching for an MGD after and injury-shortened and turbulent 2012 season. The three-time Pro Bowl running back was coming off a fantastic 2011 season, during which he led the NFL in rushing with 1,606 yards. As the face of the Jacksonville Jaguars, the Bay Area native accounted for 47 per cent of his team’s total yards and was essentially its singular offensive threat. Naturally, Jones-Drew sought to restructure his contract following such a monumental year, much to the chagrin of Jacksonville management. When negotiations didn’t go as planned, MJD staged a holdout, skipping all of training camp and the exhibition schedule — leaving him out of shape and underprepared upon his return to the active roster on September 2. Fantasy owners who still deemed Jones-Drew worthy of a high draft pick were rewarded with nothing short of disaster following his return to the field a week later. With his rushing yards slightly skewed by a big game against Indianapolis, MJD struggled to find himself while accumulated 414 yards on 86 carries through five games in 2012. Finding the end zone only once, he uncharacteristically fumbled twice before his season was cut short by a foot injury that eventually led to season-ending surgery. For Jones-Drew, the Jaguars, and Fantasy owners everywhere, 2012 was a complete waste of a season caused by the lust for a better contract. What a shame. – AP

Fantasy Rookie of The Year 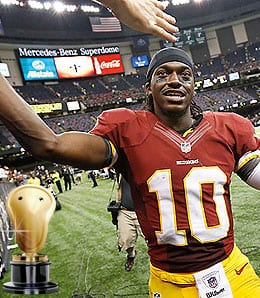 RGIII won a lot of fans with his rookie exploits.

Andrew Luck vs. Robert Griffin III. The raging NCAA football debate carried over to the NFL, as the dreadlocked, Subway spokesman took the league by storm with his vast array of impressive athletic talents. In a season that had no shortage of brilliant freshman (especially at QB), Griffin barely edged out Luck in a battle of quarterbacks that played a huge hand in turning their respective teams from pretenders to contenders in 2012. The Heisman winner turned the gridiron into his own personal playground, passing for a gaudy 3,200 yards and 2o touchdowns while adding a ground attack with 815 rushing yards and seven rushing touchdowns. Furthermore, RGIII earned the trust and respect of his team by spurring them to a perfect 7-0 record and into the playoffs following their Week 10 bye. – AP 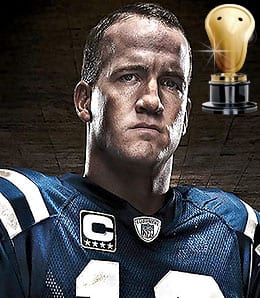 Peyton Manning turned the Broncos into a playoff team.

Wait for it… “Peyton, I’m going to let you finish, but Adrian Peterson had the greatest year of all time.” While that may be true, Peterson may very well nab the MVP and technically he did come back from a major injury to star in 2012. The slight edge for comeback of the year goes to Denver quarterback, Peyton Manning who returned from a frightening neck injury to lead the Broncos to the playoffs in 2013. After spinal fusion surgery put an end to Manning’s 2011 season before it could begin, rumours spread that it may signify the end of a Hall of Fame career for the 36-year-old quarterback. Unwilling to call it quits, Manning embarked on a rigorous training regiment and declared himself physically ready for 2012. With the Indianapolis Colts closing the book on their franchise player, the Broncos took a chance on Manning in 2012. This proved to be a wise move. Adding credibility and leadership to a once struggling franchise, Manning showed that age is nothing but a number by passing for 4,659 yards and 37 touchdowns and co-leading the NFL in completion percentage. When it was all said and done, he had led the Broncos to a top seeded playoff berth and, like Peterson, had put his name into consideration for MVP. – AP 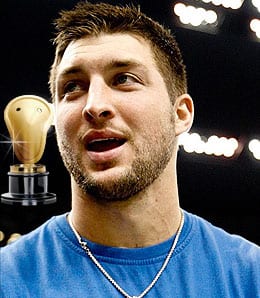 Tim Tebow sure gets a lot of attention for a player with no value.

To assign all pervasive power to one individual player seems sacrilegious to an extent (if you’re into that sort of thing), but how else can we describe Tim Tebow? In 2012, the man was everywhere, transcending being a mere football player to become some kind of omnipotent force. Oh, the fact that his Fantasy value completely dried up? No biggie. Tebow is bigger than Fantasy football. We should build statutes of him at every available opportunity. No, really. We should. – RR

Ass of the Year 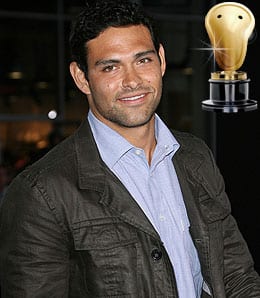 Mark Sanchez made an ass of himself on the national stage.

If Tebow was Mr. Omnipotent, what does that make his “mentor,” Mark Sanchez? Well, we’re not so sure how powerful Sanchez is as a whole – especially considering how lousy he was in 2012 after a couple of seasons of modest development. But it was on Thanksgiving that Sanchez – and the Jets – hit rock bottom. Literally. After a backfield miscommunication, Sanchez was trying to slide and wound up running right into the rather large ass of his own lineman, Brandon Moore. The ball popped loose for a butt fumble, was recovered by the Pats and run in for a TD as part of a 49-19 thrashing that New England laid on the hapless Jets. It was the perfect microcosm of a season that left Jets’ fans with the distinct aroma of ass patties in their nostrils. — RR

The Blind Leading the Blind Award 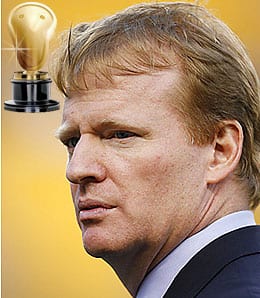 Perhaps the NFL referees that were locked out at the beginning of the season should thank the replacement refs and their ineptitude for being their best negotiators for a new deal. The Green Bay-Seattle Golden Tate touchdown that wasn’t – on Monday Night Football, no less – turned out to be the icing on the cake following weeks of embarrassment for the league and Commissioner Roger Goodell. New England Patriots linebacker Brandon Spikes worked out his frustration on Twitter: “Can someone please tell these fucking zebras foot locker called and they’re needed Back at work !!!! #BreakingPoint.” The improper granting of video reviews; mistakes marching off penalty yardage; improper clock management. The errors were endless, often affecting the outcome of games. That Goodell allowed the league to essentially turn into a joke for a few weeks was unforgivable and has bagged him some hardware. – RR 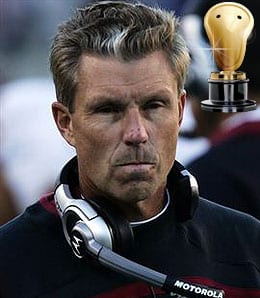 Gregg Williams proved he was no saint.

Two years ago, the Saints put a bounty on the heads of key opposing players. But after an 0-4 start to its 2012, New Orleans needs a bounty just to earn itself a win. The Saints turned things around by winning five of its next six games to get back to .500, but then proceed to drop three straight to blow any chance of even making the playoffs, never mind fulfilling any Super Bowl dreams. Former defensive coordinator Gregg Williams, the apparent mastermind behind Bountygate, has been suspended indefinitely by the NFL. – RR 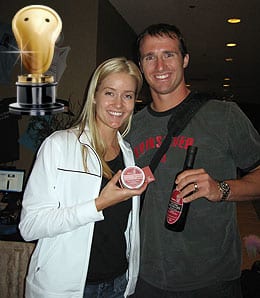 While things generally were falling apart in the Big Easy, quarterback Drew Brees was putting together another big season, albeit not nearly as big as in 2011. After passing Johnny Unitas in early October by tossing at least one touchdown pass in his 48th straight game, Brees ran the streak to 54 in a row beforer a serious stinker November 29 in Atlanta, in which he was not only shut out of TD passes, but was picked a career high five times. Wow, talking about ending a streak with a serious thud. Of course, Brees being who he is, he went out and fired TD strikes in each of the final four games of the 2012 season to launch yet another run. – RR 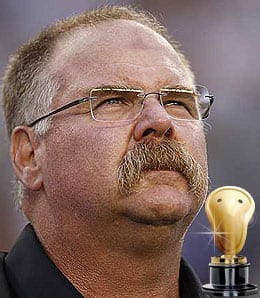 Andy Reid’s tenure with the Eagles came to an inglorious finish.

The Philadelphia Eagles celebrated their 80th NFL season in 2012, but the reasons for recognition ended there. Coming off a three straight playoff appearances (including a division crown in 2010), the Eagles slumped to 8-8 in 2011, missing the postseason. But that was just a tease of the total collapse that would occur last year. Philly got off to a nice start, winnings its first two, and sitting at 3-1 a quarter of the way through the schedule. And then the wheels came off as the Eagles proceeded to drop eight straight and 11 of its last 12 games to finish with its worst record (4-12) since 1998. Damn, it even got Coach Andy Reid fired after 14 seasons. The key culprit in this disaster? Turnovers. The Eagles were by far the worst team in the NFC with a -24 turnover differential, tying with the Chiefs for the worst mark in the entire NFL. – RR

Angie Picardo is a staff writer for NerdWallet, a website dedicated to helping consumers find the best credit cards.

By Angie Picardo
This entry was posted on Wednesday, January 23rd, 2013 at 11:30 am and is filed under Angie Picardo, FOOTBALL, RotoRob, RotoRob Awards. You can follow any responses to this entry through the RSS 2.0 feed. Both comments and pings are currently closed.