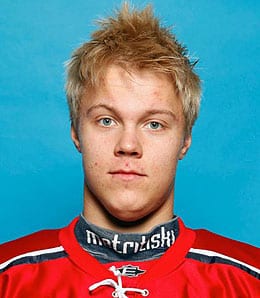 If Mikael Granlund gets the right linemates, he’ll be a Calder candidate.

And we’re back with more of a truncated and super quickly created 2013 RotoRob NHL Draft Kit. So while you wonder how a concussion symptom-free Sidney Crosby will fare this season, let’s take a look at the Top 10 Rookies.

Could we be close to the end? That answer is not really. There will be more content coming as we draw close to the regular season, starting Saturday afternoon. This particular article will be a bigger help, especially in keeper leagues.

1. Mikael Granlund, C, Minnesota Wild: Let the controversy begin early. Granlund is ready for the NHL and the reality is he has been for some time. If he gets placed as the first line pivot, which should eventually happen, look out. Granlund may only be 20, but he is ready for the prime time — the 21 points he put up in 21 games for the Houston Aeros of the AHL was done with relative ease. Will Granlund be paired with Zach Parise and Mikko Koivu? Some will debate that Dany Heatley may start on the top line, but Granlund is too good and too fast to keep down on secondary scoring lines for long. In the right scenario, his ceiling is around a point per game and that is exceedingly high value for Fantasy owners.

2. Justin Schultz, D, Edmonton Oilers: Forty-eight in 34 and that is all that we need to say here. That was his point production in the AHL this season for Oklahoma City. Defense is a scarce position and Schultz is too good not to thrive in the NHL. He may very well steal the Calder and run away with it. Yes, it really could go that well for him with the already talented young nucleus in Edmonton which will only get better with the addition of Nail Yakupov. What will Schultz’s point total be? That is going to be a tough question given all the variables in Edmonton. One thing is for sure, Schultz is going to make things move in “Oil Country.”

3. Jonathan Huberdeau, C, Florida Panthers: Now it is time to find out what Huberdeau is really made of. Honestly, it was tough to gauge from WJC, but his skills were definitely evident. The interesting thing is Florida has a nice setup for success in place for the youngster. If Alexei Kovalev makes the team and their power play unit clicks like it did last season, then Huberdeau is absolutely ready to make a mark and earn a Calder nod. The thing to keep in mind is that he is one of those players that knows little fear and can adapt to playing on the big pond.

4. Sven Baertschi, C, Calgary Flames: This is the case where a pivot could benefit from injuries very quickly. Baertschi has talent that is well documented and just seems to succeed wherever he goes. The question becomes does he wind up on the first or second line? That will make a slight difference as far as his production but honestly little else. Expect Baertschi to put up a nice solid rookie campaign and garner some Calder consideration. A point total is hard to project with him but let’s just say he is going to have opportunities to impress.

5. Nail Yakupov, LW/RW, Edmonton Oilers: There are always so many uncertainties with rookies and this is one who has an abundance of talent, but has some “individualistic” tendencies that can be considered a bit alarming to Fantasy owners. Yakupov has the ability, but can he play the North American style? If he does not adapt quickly, it will be a long rookie season. Yakupov has Calder talent, but his mental aptitude is suspect at times. This year will tell us a little bit more about this Russian player and I do not believe the WJC told the whole story.

6. Dougie Hamilton, D, Boston Bruins: “Do The Dougie” is a catch phrase that seems to have some Boston fans thinking this could work out very well. The Bruins knew what they had in this pick and he has thrived in the OHL. People have to understand that while Hamilton is not going to challenge for the Calder, he will play some minutes for Boston this season. Depending on his pairing, he could produce enough to at least help your Fantasy team’s bottom line. Just remember this while drafting, particularly for keepers.

7. Chris Kreider, LW, New York Rangers: Kreider made a bit of a splash during the playoffs last season, but has had a tough time of it in the AHL this season where he played as a member of the Connecticut Whale. Maybe playing back with the big boys will be the trigger needed to get him going offensively. The talent is there, sp perhaps Connecticut was merely the bump in the road. No one will really know until the puck drops. Kreider will not play on the top line but could see solid second line time which means power play time also. The first couple weeks of the season are going to be paramount with him.

8. Alex Galchenyuk, C, Montreal Canadiens: Hey, Scott Gomez was sent home for a reason. Galchenyuk is going to get some pretty solid playing time with the Habs. The line combinations will be interesting and if injury should rear its ugly head, Galchenyuk will benefit greatly. His WJC performance opened a lot of eyes, so don’t be surprised if he does it again in Montreal this season. The Canadiens really did find themselves a nice gem that could rise further up the list than he has already.

9. Vladimir Tarasenko, LW, St. Louis Blues: Tarasenko had a pretty good season over in the KHL while playing around 15 minutes per game for league-leading SKA. If he gets that kind of PT with the Blues, he could produce pretty nice numbers for a rookie while playing the Ken Hitchcock style. Guys like Tarasenko adapt well to the North American style if given just a little bit of ice time, but do not expect the Fantasy floodgates to open just yet. Show a little patience and the reward will come.

10. Brandon Saad, C, Chicago Blackhawks: The West Side is going to enjoy a full season of Saad as he seems to have a knack for being in the right place at the right time. This is another case where injuries will have to play a vital role in the ascension of this rookie up the depth chart. That being said, Saad could see some second line power play time, so keep an eye on how that plays out. This is another rookie who could go up the charts as the season winds down. Those kind of players are pretty rare and are the ones to snatch very late in drafts or via free agency.

So again we keep approaching the regular season while Fantasy owners get a bit more nervous at what will be one of the most uncertain Fantasy seasons in the history of the game. Do not worry, there will be positional rankings on the horizon to help you navigate these waters.

By Chris Wassel
Tags: Mikael Granlund, Minnesota Wild, Sidney Crosby
This entry was posted on Tuesday, January 15th, 2013 at 1:15 pm and is filed under 2013 RotoRob NHL Draft Kit, Chris Wassel, HOCKEY, Rookies. You can follow any responses to this entry through the RSS 2.0 feed. Both comments and pings are currently closed.