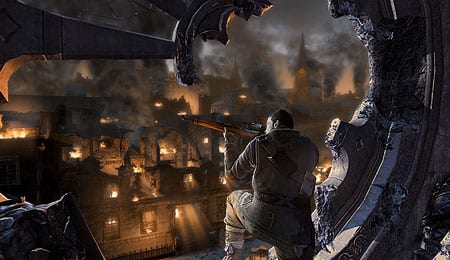 The golden rule of sniping: One shot, one kill.

There are only so many hours in day, and only so many days in a week. Thus, there are times when games get pushed to the back burner. One such title is 505 Games’ tactical third-person shooter, Sniper Elite v2, which hit shelves all the way back in May. Well, I finally got a chance to play through the slow-motion killing extravaganza and, as it turns out, it’s a pretty fun ride.

If you go into Sniper Elite v2 expecting to run and gun, you’re going to be disappointed. Both the pistol and sub-machine gun are a bit dicey, and the targeting reticule never gets as small as you’re used to, even when stationary — an odd choice given that you play as a sharpshooter. Movement can also be sketchy, particularly when it comes to entering cover. Responsiveness isn’t the issue; it’s that only certain objects can serve as cover and it isn’t always apparent which are and aren’t in play.

Thankfully, the game is at its best when taking part in its signature activity: sniping. Your heart rate is shown in the corner of the screen, and when you’re calm you can “empty your lungs,” which slows time and creates an extremely precise firing point. Depending on the difficulty setting you’ll also need to adjust for gravity based on your distance from the target (pro tip: aim high), which can be particularly tough when trying to lead moving targets. Although a little tightening from the close-quarters elements would’ve helped, the controls hold up well in the most critical department.

At first look, the environments may not impress much, but there is a decent amount of detail worked in along with a respectable number of branching paths and sniping points to be found. Character models are solid, though the odd moment — enemies running in place, invisible guns, etc. — chips away at some of the realism. Whatever shortcomings Sniper Elite v2 has visually, however, are easily forgivable when you see the Kill Cam in action.

Throughout the game, particularly well-aimed sniper rounds will trigger the Kill Cam, which momentarily stops the action so you can track the flight of your bullet from the barrel of the rifle until it penetrates its intended target. For added brutality, the Kill Cam often switches into an X-Ray mode where the damage your bullet caused is shown internally as organs burst and bones shatter. It’s visceral, grisly and makes for some of the coolest isolated moments seen in a shooter.

There isn’t a lot of dialogue, and what’s there is middling at best, but the sound effects are strong, highlighted by gunfire that has serious impact. Ambient noise is good as well with the distant sounds of bombing and general warfare ringing out, sometimes doubling as cover to drown out your gun.

Each mission follows a similar structure: traverse an area via a sequence of checkpoints, quell hostile resistance and then either collect critical documents or kill/save a high-value target. The onus is on methodical, stealth-based advancement as Fairburne is far more effective when concealed and able to pick off enemy targets from range. Get spotted and soldiers will flank your position almost without fail, even if it means a long, meandering path that often makes it tough to keep track of how many foes are still alive and where exactly they are at any given moment.

Although that makes the A.I. sound smart, it’s actually very uneven. Sometimes they’ll circle around, cutting through buildings to get the drop on you, while at other times they’ll go prone in a wide open area, which makes them easy pickings. Enemy accuracy is generally pretty high, though, and snipers will cut you down if you leave yourself exposed for too long.

I’ve already touched on the clunky mid- and close-range gunplay, but allow me to reiterate: these missions are built with a careful pace in mind, and although it can be frustrating to line up foes with your Thompson and miss, it absolutely serves the purpose of making sniping your first, second and third options for fighting groups of soldiers.

One other flaw worth noting is the snail’s pace that Fairburne moves at when crouched. It essentially leaves you with two options — go ever so slowly from one point to another, or run and tip off the enemy that you’re coming — neither of which is particularly favourable. Just a little more speed would’ve helped the game’s flow considerably.

In addition to the campaign, which should run 6-to-7 hours, there’s also a wave defense challenge and a handful of online co-operative modes. These modes are highlighted by Overwatch, which has one player serve as a sniper while the other moves along the ground and spots enemies. As long as you have a good partner, and one of you is OK playing the solider role, it can add some legitimate enjoyment. Like other aspects of the game, however, the co-op features could’ve benefited from just a little more polish.

While Sniper Elite v2 has its share of flaws — slow movement, awkward midrange combat and a sometimes frustrating cover system among them — its sniping elements and corresponding Kill Cam make it a fun game for shooter fans looking for something that’s not a Call of Duty clone.

By Herija Green
This entry was posted on Saturday, August 4th, 2012 at 1:54 pm and is filed under Herija Green, Video Game Reviews. You can follow any responses to this entry through the RSS 2.0 feed. Responses are currently closed, but you can trackback from your own site.