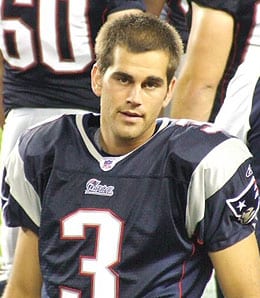 By Buck Davidson and Daniel Olson

We’re back with more of the 2012 RotoRob NFL Draft Kit with the release of another cheat sheet today. So while you wonder if Seattle’s defence can propel it to a .500 record this season, let’s review the top 20 kickers in Fantasy football for 2012.

Place kickers just are not as fun without the Grammaticas. I guess Janikowski is still pretty badass, and hell, you have to at least feel bad for the old man Hanson. He’s been a Detroit Lion his whole career! Either way, too many matchups are decided week in and week out by five points or less. Those five points can be made up by one of these futbol, er, football kickers. Depending on your scoring system, some of these dudes with serious legs can grab you more points than the sorry owner who is starting Reggie Bush. Whoops, did we say that out loud?

Gostkowski doesn’t have a monster leg like some of these other kickers, but damn it, he is on the Patriots! For any regular season games, that means he is good for at least four extra points and probably a field goal or two. That will put him around 10 points or so per week. We think you can live with that.

Akers had a strange year. He was a Pro Bowl kicker and set a record with 166 points scored. He was also only 13-for-20 on field goals of 40+ yards. The 49ers still have a crappy QB so he will get his opportunities, but we wouldn’t say he will kick the deep ball.

Crosby can knock in a few deep ones. Also, he is on such a high powered offense he will get you a whole boatload of PATs. Safe choice.

Hartley, fortunately, did not get suspended for Bountygate. But what if he did? Wouldn’t that be hilarious? Anyhow, the Saints’ offense will be high powered again this year which equals a lot of extra points. Hartley should be fine after an injury prone 2011 campaign.

Janikowski likes to party. Plus, he’s huge and will lay a defender out if given the chance. Why should you draft him? He had 17 field goals from 40+ yards last year! He’s becoming Ol’ Faithful.

Bailey had a solid year himself, knocking 12 field goals from 40+ yards last year. He has a big leg and Tony Romo is great at not finishing drives. So if you draft Romo, you might want to draft Bailey too, just in case.

Henery does not have a soccer name, he is a Place Kicker. Pretty sure he just wasn’t good enough for soccer. Either way, he’s not a bad pick up as he should net you around eight points a game.

Prater is aided by the thin air in Denver and can hit a deep field goal for you. His accuracy is not always there, but Coach John Fox wasn’t afraid to test his leg last year. If you end up with Prater, you should make out with a baker’s dozen a couple of times this year — especially if Peyton Manning struggles finishing out touchdown drives in his first season with a new offense.

Bironas has a goofy name. We kind of only trust kickers with goofy names… unless their last name is Gramattica. Then you know it’s going to be good. Oh sorry, we’re rambling. Anyhow, expect Bironas to get a ton of opportunities this year as Tennessee will either have Old Man Rivers, er, Matt Hasslebeck at QB or the gunslinger (read: inaccurate) sophomore Jake Locker. Stalled drives much?

Speaking of kickers on teams with mediocre quarterbacks, hello, Mr. Gould! Aided by Jay Cutler’s potential to break down in tears at any moment, expect Gould to build on last year’s 28 field goals made.

If you are ever looking for the ultimate Madden ’09 field goal kicker, Rackers is your man! If you are actually looking for one of the top tier kickers in your Fantasy league, not so much. He’s known for having a pretty big leg, but last year saw him only knock in eight from 40+ yards. Rackers did move to the rebuilding Washington Redskins this year, so he could have a lot more field goal opportunities awaiting him. Whether or not he converts them remains to be seen.

Bryant was extremely accurate last season, making 27-of-29 field goals. Hopefully he will get more opportunities this season as he has proven to be a rather accurate kicker over time.

Kaeding missed the 2011 season but should bounce back just fine in 2012. We’d pencil him for around eight points a contest.

Our main man Hanson is ranked this low for a number of reasons (mostly because he’s on Detroit), but he’s actually not a bad option at kicker. He is a former Washington State University Cougar (shameless plug: Go Cougs!) and actually had an okay season with 24 field goals made and 54 PATs behind the high-powered Lion offense.

Mr. Cat Scratch Fever Mike Nugent has a great shot at kicking a field goal every time his team is inside the 40. Seriously, the Bengals are terrified of the end zone. While he didn’t have any kicks over 50+ yards, he did have 14 field goals that were 40+ yards. Not a bad kicker to end up with.

If you happen to be in the crowd that says “Screw it, I don’t care who I get at kicker,” why not take a flier on Houston Texans rookie Bullock? He is a bowling ball at 5’9” and 205 lbs, and we’d love to see him lay out some annoying cornerback like Adam Jones at some point this season (even if that won’t help your Fantasy team).

Carpenter had 13 field goals of 40+ yards last year, so he can obviously knock it through from downtown. However, since he is on the Miami Dolphins, his extra point totals are lacking and there could be a few weeks where you might only get three points total.

Tynes was part of a Super Bowl winning team last year but only had 100 points on the season. Once again, we would only take him in a Bye week.

Lindell rounds out our Top 20 place kickers. He missed half of last year due to injury and in 2010 had an abysmal Fantasy season with only 79 points in a full year. Either way he gets another shameless plug from me as a WSU guy: Go Cougs!

By Daniel Olson
This entry was posted on Thursday, July 5th, 2012 at 11:28 am and is filed under 2012 RotoRob NFL Draft Kit, Buck Davidson, Cheat sheets, Daniel Olson, FOOTBALL. You can follow any responses to this entry through the RSS 2.0 feed. Both comments and pings are currently closed.