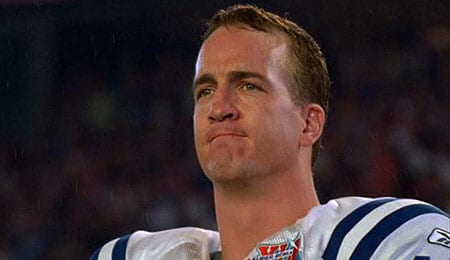 Watching Petyon Manning on a new team will be a fascinating story to track.

Another football season approaches and with it, another RotoRob NFL Draft Kit is here. Over the next few weeks, we’ll be offering up an array of cheat sheets, top 10 lists and other goodies to help you prepare for the 2012 NFL season. So while you wait to see how ugly this Percy Harvin situation will get, let’s take a look at the top 32 quarterbacks in Fantasy football.

While you might not find the top five all too shocking, hopefully we can dig deep enough to get you the value picks needed to really push you over the edge in this year’s draft. Cuz remember, if you ain’t first, you’re last! And if you’re last, you’re probably a Browns’ fan.

If you draft any of these five guys, it is almost a sure thing you will get production out of the QB spot. Barring any major injuries, bounties, or mid-season Vegas shootings, you’re putting up solid numbers all season with these guys week in and week out.

You can count on Rodgers having another monster season, anchored by his veteran receivers Jordy Nelson and Greg Jennings. Throw in a hopefully better season at tight end by Jermichael Finley and we’re seeing another 40+ touchdown season in Mr. Rodgers neighborhood.

Brees, Rodgers, and Rivers are mainstays in the top five. Eli Manning officially earned himself a top ranking (above his brother! Take that Peyton!) after his solid 2011 campaign. These guys are all studs who you can’t go wrong with.

This is where it gets a little trickier. When do you draft the 6-10 range? Is it worth a second round pick? In today’s passing league, they are absolutely worth the early pick. Don’t trick yourself into a mediocre running back who will flame out after week 10.

After the big guns are gone, Newton and Romo both make excellent options. If you want to take a trendy high risk/high reward pick, give Newton a shot. He had an impressive rookie campaign on a bad Carolina team and seemed to rejuvenate Steve Smith’s career. We see a strong sophomore campaign ahead, maybe leading to a top pick in 2013. Romo will put up big numbers but could cost you in your playoff week.

Another solid choice is Stafford. The guy has an absolute freak at wide receiver in Calvin Johnson and in general just has a huge arm. Stafford threw for over 5,000 yards last year, (second only to Brees) with 41 TDs to boot. We don’t see any reason Stafford will slow down this year.

You might wonder why we have Vick ranked so low. Last year, just like in his pre-jail days, he was a top five Fantasy player. He’s a freak while on the field, no doubt, but this guy is an injury waiting to happen. The new rules to protect quarterbacks don’t matter. Even after Bountygate, it’s probably worth it for the defense to lay a big hit on a QB like Vick. He’s a lock to miss a couple of games this year, mark our words.

As much as we wanted to slip the ol’ savvy vet Peyton Manning into the top 10, we couldn’t bring ourselves to do it. Gone are the days of Jeff Saturday blocking, Reggie Wayne running deep posts, and Dallas Clark running quick slants. Manning now gets to throw to the likes of Eric Decker, Demaryius Thomas, and tight end Jacob Tamme. Yeah, none of those are guys are too high on our board either. We think Manning’s neck will be fine and Denver’s line will protect him as well, but he doesn’t deserve top 10 recognition after missing a whole season and now having to acclimate himself to a new team.

What you see is what you get with Ryan and Cutler. They are both capable of decent numbers, but can also kill you come playoff time. Buyer beware.

Our first rookie quarterback shows up in RG3. While he may have been the second quarterback chosen in the NFL draft, he flat out has more talent around him in Washington than Luck does in Indianapolis. Griffin is set up to have a better chance at success throwing to Pierre Garcon, Santana Moss, and the talented tight end duo of Fred Davis and Chris Cooley. We envision a rookie campaign similar to what Newton did last season. It can’t hurt to give the rook a shot in the mid-to-late rounds.

The rest of this group includes college All Stars who have not quite made the Fantasy leap. Two of them have made a skip (I’m looking at you, Smith and Sanchez) while one had a strong rookie campaign despite not having huge Fantasy numbers (Dalton). Poor Bradford has had little to no change in St. Louis so it’s hard to say what he is really capable of at this point.

This is definitely your backup quarterback group, the ones you can hopefully count on for your bye weeks.

Luck be a… well hell, we’ve got nothing. For his sake, we hope he has a respectable year because replacing Peyton Manning has got to be tough. We wouldn’t be surprised if Luck starts the first game or two on the bench to sort of ease him onto the field, but we will have to see what happens here. We expect a couple of good Fantasy games from him this season, but can you guess which ones? Neither can we.

Let’s take a look at Flynn. Other analysts generally have him ranked pretty low, even lower than we do. It’s understandable, as Flynn does not have much of a track record and there’s talk that Seattle will make him earn the starter job in training camp. But here’s one reason we’d consider taking a flier on him: he has two stud tight ends in an offense that, when applicable, loves to throw to the tight end. Granted, Zach Miller didn’t have any opportunities last year, but the Seahawks line should be stronger this year and the addition of Kellen Winslow, Jr. for a bag of peanuts should make it very difficult to cover both tight ends. Factor in the Seahawks’ suddenly strong running game, and we could see the tight ends helping Flynn throw for 3,500 and 20 touchdowns.

What more is there to say other than holy crap! There are a lot of Matts starting at quarterback in the NFL. Kolb is a big ol’ waste of money by Arizona and does not even have John Skelton beat for the starting job going into the summer. To be completely honest, we didn’t even know who Skelton was last summer! We wouldn’t make Kolb your second quarterback, not even your third.

Locker has tremendous potential and is definitely worth keeping an eye on.

Tebow is slightly more intriguing, if only because we think Sanchez’s play will eventually entice Rex Ryan to stick Tebow in at quarterback. Who knows what Jesus himself can do in the Big Apple.

By Daniel Olson
This entry was posted on Thursday, June 21st, 2012 at 11:54 am and is filed under 2012 RotoRob NFL Draft Kit, Cheat sheets, Daniel Olson, FOOTBALL. You can follow any responses to this entry through the RSS 2.0 feed. Both comments and pings are currently closed.