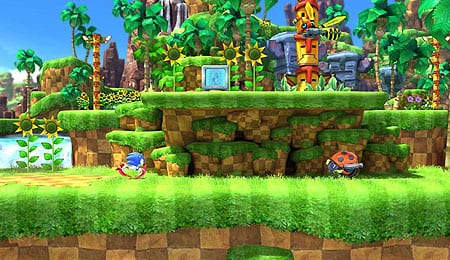 It seems like yesterday, but wow, it really was 20 years ago that Sega introduced Sonic the Hedgehog to the world as its speedy mascot. (Yep, 20 years, Gramps… get over it!) And Sega is celebrating in a big way with Sonic Generations available for PlayStation 3 and Xbox 360. This jam-packed title is set to relive and revive the magic that turned the blue blur into a multimillion-unit selling franchise and made him a worldwide gaming icon. However, with a mostly sour reputation of his current-gen console outings, does this new title have the right stuff to put Sonic back on top?

Sonic Generations dons two sets of unique gameplay: 2D Classic Sonic and current-gen 3D Modern Sonic. Both modes concentrate on speeding through stages and collecting as many rings as possible for high scoring. In Act One of every stage, the retro chubby Sonic of the past comes equipped with his basic controls and 2D gameplay from the Genesis era (run, jump and spin dash). The sleek modern Sonic takes the reins in Act Two with controls resembling his latest 3D outings. Jumping homing attacks, boosting and ring dashing are just a few of the moves in Sonic’s repertoire.

Controls are decently responsive with most of the action mapped to stick and face buttons. However, they’re still tainted with the same flaws that have existed throughout the series. Classic Sonic’s jumping ability has never been his strong suit and sadly his stubby imperfect hop hasn’t been fine tuned here either. In Act Two, Sonic’s homing attacks are still dodgy and running at breakneck speeds can feel a little loose. In some cases, these quirks can result in cheap platforming deaths that Sonic players know all too well. However, like in past great titles, Sonic is a blast to harness when he’s at his fastest, and dealing with his control flaws becomes second nature.

This is a Sonic fans’ delight as familiar stages of his past get a major makeover in terms of graphics and sound. Excellent musical remixes accompany colourful visuals boasting impressive art direction from beginning to end. All the signature sounds you’d expect are present such as the classic ring grab to the “Holy crap, I’m going to drown in this water!” music. It’s a perfect blend of everything we’ve loved about the little guy over the past two decades. Aside from frame rate chokes here and there, this is one pretty game.

Much like the controls and gameplay, Sonic Generations’ graphics shine most when he’s at top speed with outstanding camera angles and dizzying effects. 3D TV owners are in for a treat as the game supports stereoscopic 3D. At first, the effect is rather blurry, and it takes a while for your eyes to adjust to the 3D effect on fast moving 2D stages. Once the flashy camera angles kick in (especially in the Act Two stages), though, the effects are utterly fantastic and are a very worthy addition.

A mysterious time-destroying entity causes a collision with the worlds of past and present, trapping Sonic’s pals in a state of limbo. With the help of his former self, Sonic races through familiar territory to restore order to time and space and rescue his friends. This thinly veiled plot is the vehicle that drives players through Sonic Generations’ nostalgic tour. Nine stages were pulled from past adventures starting with the original Sonic the Hedgehog all the way to last year’s Sonic Colors. With a 2D and 3D version of each stage, seven bosses to fight for Chaos Emeralds and one final boss, the main story objectives are pretty comparable to most Sonic titles in terms of length and challenge.

The level design of these worlds as a whole is a bit uneven and coincidentally (?) reflects the legacy of Sonic’s game library. Right out of the gate with Green Hill Zone from the original, the game is an exhilarating blast and the experience stays strong throughout the reinvented Genesis-era stages. However, as the game progresses, the flow of the stages hit moments of cumbersome platforming and stuttering patches of speed. The low point is the frustrating Crisis City lifted from the poorly received 2006 Sonic the Hedgehog, but the final stage ends strong with the Planet Wisp stage from the much appreciated Sonic Colors.

Still, every stage is filled with great moments and there’s plenty of reason for Sonic fans to come back for more. The replay factor relies on the massive size of the stages begging for exploration as well as the extra challenges that reward gamers with bonus artwork and music. With multiple paths and hidden collectables, each stage will take several attempts to see everything they have to offer.

The challenges have great variety as well, ranging from speed runs and ring grabs to reuniting Sonic with his friends. There are five challenges per stage with two versions (2D/3D) of each, so completionists have their work cut out for them. Online scoreboards and 30-second speed and the ability to play the original Sonic the Hedgehog runs round off this very hefty package of Sonic goodness.

Happy Birthday, Sonic! As a gift, here’s a solid game that finally delivers the goods! Sonic Generations is a no-brainer grab for Sonic fans; this is definitely one of the better adventures Sega’s blue hero has had to offer in a while. It still has some of the same flaws as past titles, but they’re outshined when it showcases the best.

By Jess Castro
This entry was posted on Friday, November 11th, 2011 at 1:21 pm and is filed under Jess Castro, Video Game Reviews. You can follow any responses to this entry through the RSS 2.0 feed. You can skip to the end and leave a response. Pinging is currently not allowed.