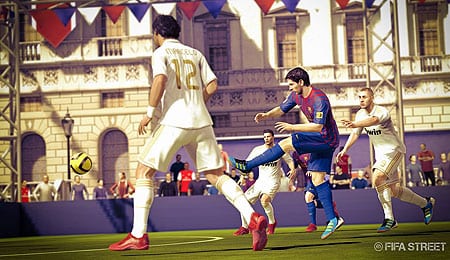 Playing defense in FIFA Street can get a little, dare I say, Messi…

It’s been over four years since Electronic Arts trotted out FIFA Street, and it doesn’t take long to realize things are drastically different this time around. Instead of going with a separate developer, it employed the team behind its juggernaut FIFA series and kept the same gameplay engine. It’s a total reboot for the Street series, but does it offer enough to justify its retail billing — especially when other EA one-offs like NFL Blitz and NBA Jam have been revitalized as US$15 downloads?

There’s a lot to keep track of on offense with three face buttons assigned to different types of passes and the final one reserved for shooting; all four of which generate a meter that determines the amount of force you’ll use. The triggers and bumpers serve as modifiers, allowing you to sprint, stop (for some fancy footwork), flick the ball up to start juggling and add a little pizzazz to your passes/shots.

A bevy of tricks can be pulled off with the right analog stick by executing various motions. Basic maneuvers like a step over or body feint need only a single flick in a straight line while more advanced moves require semi-circles and the like. Nothing gets outrageously difficult, though, and after a couple of hours most actions should become second nature.

Defensively, FIFA Street isn’t much fun. The silky smoothness of your offensive repertoire is replaced by clumsy looking tackles that the CPU delights in side stepping and just generally making you look foolish. There is an auto-contain for those that prefer to let the A.I. do the work, but spending all your time on defense simply holding down “X” makes things dull. Lastly, there are also times when the controls will queue up your commands so that a well-timed tackle will be offset because you pushed the button twice, which then prepared a 75-foot shot for the next time you touched the ball.

Although you might expect an “arcade” variant to feature over-the-top visuals, FIFA Street eschews that for a very traditional approach. The camera is pulled well back, allowing you to view a wide area of the pitch, and the result is a fairly plain looking game. That’s not to be confused with bad looking; it just doesn’t do a whole lot with the players or the (admittedly colourful) environments. At least the movement and flow look good, and the tricks can be very impressive.

In keeping with the street theme there is no commentary to be found. Instead games are populated by the shouts of players with some background music and crowd reactions sprinkled in. Despite my issues with commentary in most sports games, its complete absence feels weird. I also grew tired of the players yelling to one another. I understand EA’s aim here; it simply didn’t click with me.

At the heart of FIFA Street is the World Tour, which sticks you with your created player and a team of minimally-skilled nobodies, and then tasks you with ascending through the ranks. It’s a progression system you’ve seen dozens of times before as each contest rewards you with experience points to level up your players as you see fit from attributes to more tricks. You’ll also get your hands on new gear for your squad to wear with a different unlock at each of the game’s skill levels.

Complete enough matches and you’ll qualify for that sections tournament. Do well enough there to expand your available area to play. Rinse and repeat. In addition to improving your existing crew, you’ll also acquire new players to augment your squad. It’s a fun — albeit quite linear — mode that features all the different gameplay types and does a good job of exposing you to them.

Beyond the standard 5-on-5 and 6-on-6 matches that take place in enclosed areas with no fouls, there are a few other variations available. Panna mode allows you to bank points by performing a “nutmeg” (rolling the ball between an opponent’s legs) or simply beating them with a move. Score a goal and you get all the points you’ve built up; allow one and your counter resets to zero. It’s an interesting take that introduces a risk/reward strategy of when to play for the goal.

Last Man Standing has you going 4-on-4 with no goalies, and each time your team scores one of the players is removed, giving the other team a temporary advantage. The ebb and flow of matches can be pretty intense, which helps make it one of the game’s standout modes. Rounding out the core variants is “Futsal,” which is the closest thing to traditional soccer. Here the pitch contains boundaries and fouls can be called. It’s decent enough but doesn’t pack the fun of LMS or Panna.

Whichever rules set you’re using, one truth remains constant: FIFA Street is a hell of a lot of fun as long as you’re attacking. Pushing ahead is smooth and responsive with tricks that are easy to execute and cool to pull off, and yet aren’t so devastatingly effective that you can just breeze past the defense by spamming them over and over again. With teammates that put themselves in good position to set up for shots, the pace of the game is fast — even if aiming at the undersized nets takes some getting used to.

Then, there’s defense. I already touched on some of the problems in the controls section, but there’s more than just awkward tackling animations working against you here. At the forefront is some brutal A.I. where teammates will actively move away from the net and allow your opponent to score. I saw it time and again across multiple difficulty settings, but always on my side of the pitch. Yes, for whatever reason, the incompetent defensive A.I. only afflicts your squad. It’s really frustrating, particularly on the higher difficulty settings where the CPU doesn’t need the extra edge.

Online play is also a bit disappointing. It’s not a performance issue; rather, it’s one of limitations. For starters, only the regular and “Futsal” modes are available, which leaves LMS and Panna on the outside looking in. Plus, the game’s catalog of real-life teams is not selectable, either. Instead you’re limited to using your created team. As you progress you do get the opportunity to pick up real players, but if you’re looking to jump online early on you’ll be doing it with a squad of faceless scrubs.

More accessible than the full-fledged FIFA titles, FIFA Street should entertain footie fans for quite a while. It’s a bit lacking in some areas (most notably online) and defense can feel like a lost cause, but fans of the FIFA series won’t regret the purchase.

By Herija Green
This entry was posted on Thursday, April 5th, 2012 at 1:06 am and is filed under Herija Green, Video Game Reviews. You can follow any responses to this entry through the RSS 2.0 feed. Responses are currently closed, but you can trackback from your own site.