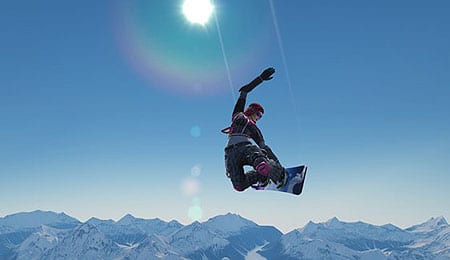 It’s time to get tricky again — this time in HD.

As one of the leading launch-era titles of the Playstation 2, SSX quickly wowed gamers with its sense of speed, scope, and — most importantly — fun. The trick snowboarding sub-genre fell into a rut by the time the system’s life cycle ran its course, but EA Sports is smart enough to give a franchise time to breath before rebooting it for the current generation. The good news is that EA Sports has done justice to the best games in the series; the better news is that the development team has implemented many new features from this generation’s sports titles to create an even deeper experience.

Right analog control is all the rage in this generation’s sports games, and there’s a good reason for that — this control scheme has added a level of nuance and feel that simple buttons couldn’t necessarily replicate. EA Sports has gone with that mentality with its SSX reboot, and while classic controls are still available for the series veteran, the right analog takes centre stage. The right analog represents your character’s hands; move it to the left and you’ll grab the left side of your board, move it up and you’ll grab the board’s nose, and so on. Outside of basic directions, right analog rotations add another dimension to board movement and holds. Just like the original game, the left analog controls general movement on the ground and flips/rotations in the air.

Buttons still come into play, though — even if you don’t use the classic controls, you’ll use a face button for a basic jump move. The trigger buttons activate boost and modify tricks or movement. A new feature steals from last gen’s Prince Of Persia series by allowing a time rewind. Keep in mind that you’ll be penalized for this — the clock continues to tick, and for every fraction of a second you rewind, you’ll have points taken away.

Of course, for any racing game, the bottom line on controls is whether or not they’re responsive enough to be immersive. EA Sports did it right this time by bringing over what already worked as a classic control option, then putting a lot of thought into right analog controls and new features. Both sets of controls are crisp and responsive, which is particularly critical when you’re snowboarding down a mountain at a really, really, ridiculously speed. And just like the old games, when things seem out of control, a few frantic hacks at the controller might pull off your best trick yet.

When you’re snowboarding down a virtual mountain, the environment is more probably more important than your actual character. This being an EA Sports game, you can bet that plenty of bucks have been invested in both the game engine and the artwork behind the game. Simply put, SSX looks gorgeous during gameplay. The pre- and post-race cut scenes aren’t as impressive, as much of the processing power seems to be focused on the snowy runs around you.

Animation and movement during the race is smooth and effective. Not only does your character move with appropriate trickiness (pun intended), the sense of speed surpasses the SSX games from last generation. A significant part of this has to be the transition from 4:3 standard definition to 16:9 high definition. With the wide view, you get so much more of the landscape in a single screen, and when it’s screaming past your character at full speed, it’s quite a sight.

SSX has a long history of licensed music, and this version is no different. Licensed music is inherently a hit-or-miss venture — it’s rare that most people will like every song. EA plays it safe by going with a mix of mainstream alternative and indie rock bands, along with a sprinkling of electronica and hip hop. The list is fairly inoffensive, and in some ways even a little cutting edge (Canadian duo Handsome Furs is one of my favourites). EA Sports has also kicked in a new element where the soundtrack actually reacts to your performance, so beats will actually slow down as your descent gets interrupted by, say, a nasty run-in with a tree.

The soundtrack can be a little overwhelming, though. This could be a good or bad thing depending on how much you actually care for the idle chatter of your helicopter pilot/navigator. On the one hand, he’s helpful at times; on the other hand, his remarks aren’t nearly as clever as the designers would have hoped.

The basic principle of SSX hasn’t changed from its original model: snowboard down a mountain, do tricks to get points and earn boosts, all to establish as fast a time as possible. The more outrageous the trick, the greater the boost, which is thus applied for speed and more trick variety. So, how does EA Sports bring this to the current generation?

For starters, the 150 or so tracks have been brought over to real-world locations. With these tracks — which, let’s be honest, aren’t 100 per cent accurate — players move between tracks based on time, tricks, and survival (AKA Deadly Descent). Each type of track consists of a different type of strategy. Time tracks are all about the fastest completion time; tricks aren’t quite as important for style points, but they earn boosts, which allow you to get down to the finish line faster. Trick-based tracks focus on running trick into trick, unleashing a potential non-stop combo that leaves the boost meter filled. Survival mode takes your health meter and armour into account (more on that later) as you try to get to the finish line. Tracks vary based on the type of event, factoring in environment and design into how you handle things.

Finishing tracks is just one of the ways to earn XP, which are used to buy better gear or custom outfits. Many of these are simply for aesthetics, but others offer unique abilities that alter your character’s abilities — or in the case of armour, simply make them tougher to take down during a survival challenge. Note that for the impatient gamer, you’ll be able to skip an event after several failed runs. Some purists may not like that but, hey, no one’s forcing you to use it.

All of this is tied together by a loose story in World Tour mode, which most people probably won’t care about. If you’re an SSX veteran, you may notice some of the ties to the older games; everyone else will probably just skip past the story and go on to the track selection.

Outside of World Tour is where the replay factor really kicks in. Though there’s no head-to-head online or local racing mode (which makes no sense), EA Sports has implemented a challenge system that involves user-generated content and records. In short, there’s always something to go after. Explore mode is a basic throwdown to the user community — check finish times and trick scores among your friends and attempt to beat them (you’ll see their ghost character on the track to give you a sense of their performance).

Global Events takes a specific challenge of varying duration — some lasting several days — and allows you to put up your best effort in there. The better you do, the more of the challenge’s pot you’ll take away. With Global Events allowing up to 100,000 competitors, there’s plenty of incentive to get your juices flowing — and events change and update constantly, ensuring there’s always something to check out.

You’ll also want to revisit older tracks because of community geotags. Geotags are awards placed specifically by community members as a challenge; the longer a geotag goes unclaimed, the more loot the creator receives. Geotags stand out with a distinct icon, and when you pass one on a descent, there’s a good chance you may fire up the same track again just to get it. With unlimited possibilities in geotag locations, it’s something that will fire up the competitive spirit of both geotag creators and seekers for a long time.

SSX is just plain fun. You don’t have to be a series veteran to get a kick out of it. The tight controls, strong environments, variety of tracks, and immersive user community features provide an experience that keeps on giving.

What’s missing? Real-time competitive races with local or online opponents and a track creator a la ModNationRacers. But there’s always next year’s iteration — this is EA Sports, after all.

By Mike Chen
This entry was posted on Thursday, March 8th, 2012 at 8:30 pm and is filed under Mike Chen, Video Game Reviews. You can follow any responses to this entry through the RSS 2.0 feed. You can leave a response, or trackback from your own site.