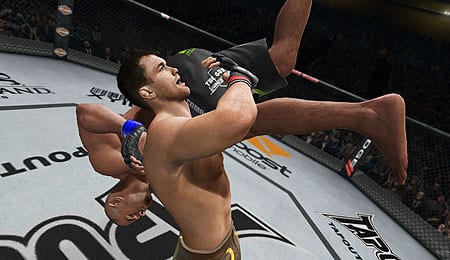 The takeoff isn’t too bad, but the landing is murder…

For better or worse, gamers have been trained to expect annual updates from their sports game of choice, be it golf, football or pro wrestling. However, that is not the case for THQ’s UFC Undisputed 3, which enjoyed a longer development cycle (the last titled released in May 2010) and thus had extra time to tack on new features and iron out the kinks. The results are impressive.

Perhaps the biggest hurdle to enjoying the last installment was the complex controls that required persistence to get a firm handle on. This time around, though, you’ve got options. Advanced players can select the “Pro” scheme while more casual grapplers can select an all-new “Amateur” option. The “Pro” setting plays just like UFC 2010 with transitions executed by making precise motions with the right analog stick. Conversely, “Amateur” streamlines all that down so that you only need to push up and down on the stick to pull off the moves.

However, even with the ground game and clinching simplified there’s still plenty to keep track of once the fight begins. You deliver strikes via the face buttons and can modify high/low by holding down one of the triggers. Defensively you can block, sway or counter, which sounds a lot easier than it is given some demanding timing. Submissions are locked in by clicking down on the right stick, which also triggers a brand new mini game. Here you and your opponent chase each other around the border of the screen while a meter counts down toward a counter or a tap out.

While the new mini game is a welcome change to 2010’s alternative of rapidly rotating the right stick, that action does return when trying to take down an opponent. I didn’t like it last time and I don’t like it now. The reduction of it is a step in the right direction; next time let’s hope it’s eliminated.

Physicality is the name of the game when it comes to the Ultimate Fighting Championship, and UFC Undisputed 3 does a tremendous job of making the action look smooth and impactful. The way body parts interlock during transition struggles without clipping through one another is impressive, and the difference between glancing blows and flush strikes feels significant. It’s easy to see the results of the battles, too, as cuts open up, eyes swell shut and body parts redden from abuse. If anything, the game seems a bit too eager for the blood to start flowing as I was cut more times than not — even in matches when I seemed to absorb few hits.

Presentation remains a strong point as well with pre- and post-fight scenes doing justice to what you’d see during one of the promotion’s free shows or pay-per-views. Another tick in the plus column is the way THQ has implemented the now-defunct Pride Fighting Championships (PRIDE) with the promotion’s unique visual elements, which gives it a completely different feel than fights in the octagon.

All the signature voices associated with the UFC are present: Mike Goldberg and Joe Rogan handle the play-by-play and colour, respectively, and Bruce Buffer is the ring announcer. Commentary feels a bit more diverse this time around, but it lacks the dynamic feel of an NBA 2k12 or NHL ’12. PRIDE fights also get their own announce team with Bas Rutten and Stephen Quadros calling the bouts, though they’re overshadowed by the awesome ring announcer(s). The soundtrack is decent and there are a lot of tracks to choose from, but the inability to import custom songs from your console to use as entrance music seems like an oversight.

Subtle yet significant changes have been implemented into UFC Undisputed 3 to provide even more realism and strategy for those that want it. Perhaps the biggest is simulation mode, which helps re-create the pacing of real fights by limiting the combatants’ stamina. It markedly slows things down and makes you consider your actions more closely. You have to pick and choose your openings, and it’s not unusual to spend minutes searching for that one moment when you finally catch your opponent leaning the wrong way and go to town.

On higher difficulties, and with both simulation and pro controls active, the fights become tension filled affairs, which really captures the nature of the sport. I vividly remember some of my best matchups, which included knocking an opponent to the ground with a hook only to be caught and submitted in a triangle when I went in for the kill throwing undisciplined haymakers. That “anything can happen” feeling is a great thing for a fighting game to have, and the new gameplay tweaks feed into it nicely.

Now, if you’re reading the first two paragraphs thinking that still sounds complex; well, that’s because it is. Even though THQ has made strides in crafting a more accessible experience for newcomers, this is still a very tactical game once you move beyond the bottom difficulty rungs. There are just too many maneuvers (strikes, takedowns, blocks, sways, submissions, etc.) available to win on the higher settings to simply rely exclusively on one or two tactics — and if you harbour any hopes of being a competent online competitor you’re going to need to put in work.

Another area that received attention is Career Mode, which figures to be the primary single-player source of entertainment. This time the progression is more focused and less grounded in the micromanaging of numerical attributes. You select an opponent, you receive a set number of activities before your match, and after you complete them you fight.

The activities consist of three pre-fight possibilities: train, visit a gym, or construct a game plan. Training has been overhauled to provide a number of mini games that are mostly enjoyable, and it’s definitely an improvement from UFC 2010 where anything other than taking down your sparring partner was a waste of time. Visiting gyms allows you to learn and improve special techniques, while game planning is a way to earn temporary stat boosts before a fight by choosing a plan and then imposing it during sparring.

As your fighter develops, you will unlock additional sponsors and earn CRED, which is the in-game currency used to hire new trainers (this raises your skill cap) and purchase the copious amount of available sponsor-approved merchandise. Also, for the first time you can select real UFC competitors and guide them in Career Mode rather than just using created fighters.

As noted earlier, PRIDE has been added to give gamers a different look. You’re still fighting in mixed martial arts, but there are some notable differences both in appearance (you fight in a ring, not a cage) and rules (they allow some vicious kicks and stomps). Combine PRIDE tournaments with title hunt and defense modes, and the historic Ultimate Fights and there is more to do in UFC 3 than past versions.

Online play is available as well, though it’s hard to offer a full read. Prior to launch I was able to find the occasional game, which ran smoothly, but since Tuesday the servers have been wildly inconsistent — so much so that THQ has posted about the issue on the in-game crawl. When matched against a similarly skilled fighter on a good connection this can be loads of sweaty-palmed fun where each player is always potentially a flash KO from victory. However, unreliable servers could potentially doom the game’s fun factor.

Refined gameplay, improved Career Mode, a huge roster of fighters, and the inclusion of PRIDE make UFC Undisputed 3 the pre-eminent mixed martial arts game on the market. It’s still not the most inviting game for beginners, but if you’re willing to invest the time you’ll be rewarded with a deep fighting experience.

By HC Green
This entry was posted on Friday, February 17th, 2012 at 10:58 pm and is filed under Herija Green, UFC, Video Game Reviews. You can follow any responses to this entry through the RSS 2.0 feed. You can leave a response, or trackback from your own site.