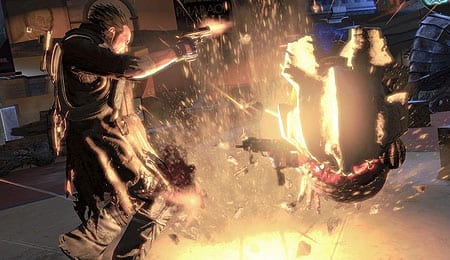 By now we should know that being immortal isn’t all it’s cracked up to be. All your loved ones pass away from old age as time stands still for you. You forget how to savour life’s little moments and become resentful and apathetic toward the world. In fact, it becomes so bad and you care so little that you shower with your clothes on and use the toilet without dropping your pants. Konami knows the woes of living forever as it’s so eloquently demonstrated in its quirky action title, NeverDead, where being an immortal badass isn’t what it’s cracked up to be.

NeverDead’s liquor-swilling demon killer, Bryce Boltzmann, has two styles of third-person action gameplay to alternate from: double-fisted gunplay and sword wielding. From pistols to grenade launchers, Bryce can fire two weapons independently by using the trigger buttons while moving and aiming with the analog sticks. You can select any combination of your collected weapons by pressing left or right on the d-pad. It’s pretty awkward considering you have to cycle through the weapons for each hand; and during heated combat it can be a royal pain.

When switching to swordplay, holding the left trigger focuses on the nearest enemy and using the right analog stick swings Bryce’s Butterfly Blade. You know, like a butterfly knife, but sword size? This is a pretty interesting mechanic where you can choose the direction and timing of the swing, but sadly it’s just for aesthetics. You can madly swing away and get better results than developing a strategy. Toss in a dodge, reload and jump button and the end result is a mishmash of the action-adventures like Devil May Cry and third-person shooters similar to Gears of War.

Attempting to set itself apart from the pack is Bryce’s unique ability to literally be torn to pieces and still fully function (he’s immortal, you see). You can tear off your own head and chuck it into air shafts or even obtain perks that turn your severed arms into grenades. Whether you do it to yourself or are simply dismembered or decapitated by an enemy, you’ll be able to coax your limbs and torso back together, regenerate them or even roll around as a severed head.

Unfortunately, as promising as this macabre concept sounds, it’s a total pain in the ass. The throwing range of your body parts is short and imprecise, and scurrying around to recover them will make you wish you were dead instead. Along with weak platforming, wimpy firepower, limited melee weaponry and barely functional camera control, NeverDead is packed with more frustrating moments than it’s worth. These watered down hybrid controls simply don’t come close to delivering the precision, speed and visceral satisfaction that the best of the genre has to offer.

There’s some good model and environment work on display here, but what kills NeverDead’s presentation is jumpy camera moves, ugly polygonal clipping and overall repetition. The roster of enemies is limited, so prepare to see the same critters over and over again. The most admirable aspect of the level design is the sheer amount of environmental damage you can dish out. Pillars and walls can collapse down with a decent amount of detail, but I’d gladly trade this in for smoother frame rates and more enemy variety.

Voice actors are doing their best at delivering uninspired cliché one-liners and dialogue, but it isn’t good enough. Hearing Bryce mutter the most obvious gags such as, “Get your head in the game, Bryce!,” is groan worthy the first time, so you can only imagine how great it is to hear it the 10th or 20th time on the second stage. Metal heads might get a little tingly when they realize that Megadeth crushes it with a title track, but that sets the bar too high for the rest of the accompanying score, which is mostly boring despite a few moments of heavy shredding.

A quick look at NeverDead will easily draw comparisons to the Devil May Cry series seeing as how both are third-person action fests featuring a half-demonic gun-slinging and sword-swinging anti-hero. Aside from the occasional switch board and puzzle that require you to “use your head” (*groan*), you’ll find yourself in the familiar routine of encountering a demon-sealed door that needs the area purged of evil before moving on. Kill the baddies, fight a boss you may or may not have encountered already, and use your experience points to purchase perks such as increased strength or faster body part recovery.

However, NeverDead never quite captures the magic of Capcom’s successful franchise. Instead of a stylized combo system that quickly alternates guns and melee weapons on the fly, Bryce sluggishly fumbles through a wimpy arms selection before making the wise decision of sticking with the sword (and only a sword), which happens to be the most effective means of dispatching the denizens of Hell.

Then there are the dismemberment mechanics, which are the perfect catalysts for rampant profanity. Every enemy in the game has the ability to burst Bryce’s body into pieces, even reappearances of the “puppies,” the first enemy of the game. This certified panty-sniffing shitty-pants demon hunter falls apart at the seams way too often, bringing the game to a screeching halt every time some chump monster takes a swing at you. Usually demonstrating poor collision physics, it’s not uncommon to see this guy’s head spinning in glitchy space or stuck between a pair of unbreakable surfaces resulting in a checkpoint restart.

Luckily, NeverDead is rather generous with the checkpoints, making it an easy game to defeat. That is except for the final two bosses, which bring all of the game’s major weaknesses into the spotlight. Seriously, between Bryce exploding into pieces every five seconds and the piss-poor platforming, that battle almost had me suplexing my TV out of sheer frustration. However, other than that monstrosity and crime to all humanity, the game is a breeze. There’s co-op and competitive challenge modes that you can play online with your purchased perks, but they feel tacked on and unnecessary.

Konami enters the third-person action area with NeverDead, available on Xbox 360 and PlayStation 3, but it comes with too little and arrives too late. The ideas and concepts have promise, but overall sloppy presentation prevents it from making an impact. With a full retail tag of US$59.99, you should pass on it, but this can be a decent bargain-bin title in the future if you like hot chicks and poopy pants.

By Jess Castro
This entry was posted on Thursday, February 16th, 2012 at 12:20 pm and is filed under Jess Castro, Video Game Reviews. You can follow any responses to this entry through the RSS 2.0 feed. You can leave a response, or trackback from your own site.