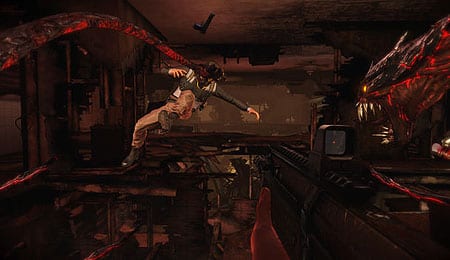 It’s been nearly five years since 2k introduced gamers to The Darkness, an interesting title that wasn’t afraid to take some chances in a genre that doesn’t always foster innovation. Now after a lengthy wait the sequel is upon us, and like its predecessor, The Darkness II brings with it some cool new tricks that are sure to please most FPS fans.

Be it Halo or Call of Duty, dual-wielding is old hat; quad-wielding, however, feels completely fresh, and that mechanic serves as the signature draw of The Darkness II. You can carry three guns at once — one two-handed gun (like an assault rifle or shotgun) and two one-handed guns (pistols, SMGs). When you have only one equipped you aim down the sight with the left trigger and fire with the right; and when you’re packing two guns each is fired independently via the corresponding trigger. Switching between them is handled seamlessly via the d-pad.

Of course, you’ve also got those wonderful demon arms, which are mapped to the shoulder buttons. The right is used in conjunction with the right analog stick for melee strikes while the left is reserved for grabbing objects (poles, doors, people, etc.) and whipping them across the screen. Suspended enemies can also be executed in a variety of brutal and satisfying ways. It starts off pretty basic, but as you gather dark essence, new moves can be purchased. Eventually you’ll have a different type of execution for each face button — one restores, another replenishes ammo and so on. Beyond just being visually cool, there is some element of strategy involved as you can address various needs with the executions.

A couple minor issues don’t detract much but do bear mentioning. First, you’d be hard pressed to slip a piece of paper under your feet on jumps; and for someone imbued with supernatural darkness powers your vertical is nearly useless. Also, the moments when you’re all but required to use the melee arm to destroy enemy shields feel too much like you’re just flailing around.

Adopting a completely new visual style, The Darkness II does a strong job of capturing the comic-book-come-to-life motif. It fits with the series’ roots and portrays a level of surrealism that helps keep the game’s disturbing violence from ever feeling, well, disturbing. Animations are first rate and offer up enough fun and variety that even after you’ve executed 100 enemies it doesn’t feel stale. There is an unfortunate lack of diversity in enemy type, though, as you’ll see the same handful of identical looking foes throughout the game.

In the interest of disclosure this was my first review with my new headphones so things were crisper and more detailed than normal. That being said, the two elements that did the most for the audio — the soundtrack and voice acting — had nothing to do with fidelity. I really enjoyed the classical and often understated tenor of the musical score. There are also some licensed tunes mixed in that go perfectly with the scenes they appear in. The voice acting is very strong as well, and it does a nice job of getting you to invest in the story’s personal relationships; particularly Jackie and Jenny.

We pick things up two years after the events of the first game with resident antihero Jackie Estacado now reigning as the Don of the Franchetti family. Since the events of the original, Jackie has managed to control the darkness, but that all changes when he’s attacked by unknown enemies. Severely wounded during the battle, Jackie must unleash the darkness to save his life. From there you’ll need to find out who was behind the hit and what their true motives are.

It doesn’t take long to identify this new threat, which makes for an average main story arc that is elevated immensely by character development and the game’s pacing. Rather than just rushing forward from one set piece to the next, The Darkness II intersperses lots of segments where the guns are put away and additional layers of Jackie’s story are revealed. There’s also an alternate world angle that does a good job of slowing things down and making you wonder what is really going on here. It lacks the marvelous intricacy (and plot twist) of BioShock, but it still weaves story development and balls out shooting action as well as anything I’ve seen recently.

Combat is a sadistic pleasure once you master the quad-wielding I detailed earlier, especially when squaring off against mobsters and low-level members of the Brotherhood (the secret society out to claim the darkness). It’s in these instances when your foes are overmatched that it really becomes a game of “how can I top this?” There are literally dozens of ways to dispatch enemies, and the more comfortable you get the more intricate these kills become. It’s a rare thing to be halfway through your first playthrough and already be thinking about what you can do the next time when you’ve got more abilities at your disposal, but such was the case here.

Speaking of abilities, Jackie is able to unlock loads of new tricks by harvesting dark essence, which is then used to purchase the skills. Each kill rewards you with essence, but not in equal measure. Doing something simple like shooting an enemy may net you 10 points whereas impaling them with a pole earns you 20 and so on. Eating hearts, finding relics and executing enemies all help pile up the points as well, though there’s so much to unlock that you won’t get it all until a second playthrough.

Although the enemies stop being pushovers as you progress, I’d be hesitant to classify The Darkness II as a difficult game (at least outside of the Don setting). Some foes can be pesky, such as ones that utilize a whip to take your guns or those that use spotlights to force your darkness powers into temporary remission, but deaths on the default setting were few and far between. I’d estimate the campaign took between six and seven hours to finish, which given the lack of competitive multiplayer is a bit on the short side.

There is, however, an additional mode to provide a little more bang for your buck. Dubbed “Vendettas,” the supplemental campaign provides a couple more hours of action and allows you to join forces with other players online. You pick from four unique characters, each of whom have their own weapons and limited darkness powers. Those without online capability can still play through it solo, but the makeup of those four makes it up clear they were designed to complement each other in combat. While fun in spurts, without friends it ultimately feels like you’re playing as a watered down Jackie.

Also included within the Vendettas mode is the Hit List, which offers up some of the game’s biggest challenges (albeit at least in part because of the limited scope of your arsenal) and is definitely a selection aimed at multiplayer co-operation.

With so many first-person shooters emulating one another it’s nice to see Digital Extremes and 2k Games offer up something fresh in The Darkness II. Even while disemboweling enemies Jackie somehow remains vulnerable and relatable, and the combat is unadulterated fun. That’s a potent mix that makes The Darkness II a highly entertaining affair.

By Herija Green
This entry was posted on Monday, February 13th, 2012 at 1:54 pm and is filed under Herija Green, Video Game Reviews. You can follow any responses to this entry through the RSS 2.0 feed. You can skip to the end and leave a response. Pinging is currently not allowed.