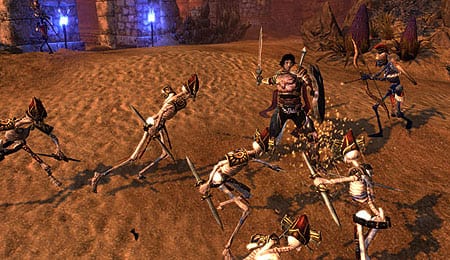 These skeletons don’t have the “guts” to face you one-on-one… get it?

While not everyone embraced Dungeon Siege III, I thoroughly enjoyed the basic button-mashing combat and felt the story did more than enough to keep me engaged from start to finish. Now, Square-Enix and Obsidian are back to satiate my need for all things hack and slash with the release of the add-on, Treasures of the Sun.

In keeping with the original story, the DLC maintains the game’s linear approach as you journey to the Aranoi Desert to discover the fate of a long lost legionnaire. With respect to both size and length, Treasures of the Sun is a very respectable offering with five-plus hours of content that includes the usual mix of side quests and in-game lore on top of the interesting main story.

Even if the story elements don’t interest you, the combat found in the add-on is on par with the most challenging segments of the main game. Enemies attack in swarms throughout and can make advancement difficult even on the default setting. There were actually moments when the screen became crowded to the point that I had difficulty locating my character amid the action. Those instances definitely felt over the top, but thankfully they were isolated.

Beyond new quests and challenging combat, Treasures of the Sun also features additions and tweaks that can resonate beyond the DLC. For starters, the level cap has been raised to 35, which gives you the chance to further beef up your character — even though that will largely appeal to people who haven’t yet completed the primary storyline.

Along with the increased level comes the opportunity to completely reshape your character by redistributing all the skill points you’ve earned along the way. It costs 20,000 gold, but you shouldn’t have any trouble looting that amount in short order.

Also, located within the desert is a series of shrines that unlock three ultimate abilities that deplete your entire cache of power orbs. There’s one each for healing, defense and offense, with one selectable at a given time. To switch your active ability you need to visit one of the shrines, but given the relative ease with which all characters can heal it makes the most sense to select the attack ability and just go with that.

Essences have been added as well, which you can use to imbue existing equipment with new status effects. The essences range in power and effectiveness, but it’s quite expensive to fuse them with your items so most will either have to pick and choose or do some significant grinding for gold. Still, the combination of essences and new items is an enticing carrot for anyone that is having difficultly completing the main quest.

If you enjoyed Dungeon Siege III, then Treasures of the Sun is a worthwhile purchase at 800 MS points (US$10). An increased level cap, powerful new weapons and the ability to reallocate your skill points may take top billing for most, but there’s also a solid story here — one which offers a final choice that suggests maybe this DLC is a bridge to something down the road.

By Herija Green
This entry was posted on Monday, November 28th, 2011 at 11:26 am and is filed under Herija Green, Video Game Reviews. You can follow any responses to this entry through the RSS 2.0 feed. You can skip to the end and leave a response. Pinging is currently not allowed.